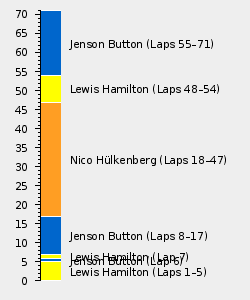 The 2012 Brazilian Grand Prix (officially the Formula 1 Grande Prêmio Petrobras do Brasil 2012) was the 20th and final race of the 2012 Formula One Season. It took place at the Autódromo José Carlos Pace on November 25 2012.

It was Michael Schumacher's final race in Formula One.

With a 13-point gap between championship leader, Sebastian Vettel and second-placed Fernando Alonso, the 2012 Drivers' World Championship was to be decided here.

Button won the rain-affected race in a safety-car finish ahead of Alonso, with Felipe Massa in third. Webber finished fourth, with Nico Hülkenberg in fifth, after an impressive race ruined by a collision with Hamilton. Vettel's sixth place, achieved after an accident at the start, gave him the championship.

Ahead of the 2012 Brazilian Grand Prix, Red Bull-Renault driver, Sebastian Vettel leads the World Drivers Championship by 13 points from Spaniard, Fernando Alonso. The championship would be decided at this race. No other drivers are in contention for the title. Following Vettel's 2nd place at the United States Grand Prix, Red Bull have secured the Constructors' Championship, holding an unassailable lead of 73 points ahead of Ferrari.

This race was the last for Michael Schumacher as he would retire for the second time after being in Mercedes for 3 years.

The São Paulo circuit remains mostly unchanged from last season, although the grandstands have been moved back slightly around the Subida dos Boxes section due to numerous major incidents, including a number of fatal accidents, in the last couple of years. As a result, there will be more run-off around this section of the circuit. Also as a reaction to this, the DRS zone will be moved to the straighter Reta Oposta between turns 3 and 4.

Early weather indications shown a high probability of rain throughout the weekend, which may be a contributing factor in the championship battle.

For Sebastian Vettel to win the 2012 Drivers' World Championship if:

For Fernando Alonso to win the championship:

The full entry list for the 2012 Brazilian Grand Prix is shown below:

* Pastor Maldonado was given a ten-place grid penalty for receiving a third reprimand of the season for missing a call to the weighbridge after the second qualifying session.

* Pastor Maldonado was given a ten-place grid penalty for receiving a third reprimand of the season for missing a call to the weighbridge after the second qualifying session.

Retrieved from "https://f1.fandom.com/wiki/2012_Brazilian_Grand_Prix?oldid=81044"
Community content is available under CC-BY-SA unless otherwise noted.