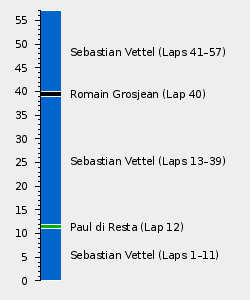 The 2012 Bahrain Grand Prix (formally known as the 2012 Formula 1 Gulf Air Bahrain Grand Prix) was a Formula One motor race held on 22 April 2012 at the Bahrain International Circuit in Bahrain. It was the first time Formula One had returned to Bahrain after the 2011 race was cancelled due to ongoing anti-government protests. After using the "endurance circuit" in 2010, the series reverted to using the "Grand Prix Circuit" configuration for the 2012 race.

The race was won from pole by Sebastian Vettel, followed closely by Lotus F1 driver Kimi Räikkönen with Lotus team-mate Romain Grosjean in third. The result ensured that four different drivers have won the first 4 races of the season for the first time since 2003. This race also marked the first podium for a French driver since Jean Alesi's 3rd place at the 1998 Belgian Grand Prix.

Following the cancellation of the Bahrain Grand Prix last year, the race this year was in doubt from day one. Originally, the event was given a berth late in the 2012 season so as to allow extra time for the civil unrest in the country to subside. This date was later revised however, moving the race to its final spot, in mid-April. The race's future was still in doubt though, up until the Chinese Grand Prix, when an official statement was made by the FIA giving the event the go-ahead. One week later, the Friday practice sessions went ahead in spite of violent clashes in Bahrain. On Thursday, a car carrying mechanics and team personnel of Force India had been attacked, forcing a number of team members to return home.

The full entry list for the 2012 Bahrain Grand Prix is shown below:

Retrieved from "https://f1.fandom.com/wiki/2012_Bahrain_Grand_Prix?oldid=75005"
Community content is available under CC-BY-SA unless otherwise noted.