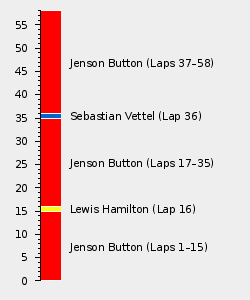 Lewis Hamilton set pole position for McLaren-Mercedes, with team-mate Jenson Button second on the grid. World Champion Sebastian Vettel qualified in sixth place, behind his Red Bull-Renault team-mate Mark Webber. Both Ferrari drivers were knocked out in the second qualifying session. On his return, Kimi Räikkönen was knocked out of qualifying in the first session, and the HRTs did not qualify.

In the race, Jenson Button took the lead at the first corner, and he went on the win the race, setting the fastest lap in the process, a few seconds ahead of second-placed Sebastian Vettel. Polesitter Lewis Hamilton completed the podium positions. Mark Webber finished fourth. Fernando Alonso had a strong race to finish fifth, having a battle with Pastor Maldonado, who crashed on the final lap. Nico Rosberg's car suffered a puncture on the last lap, robbing him of what could have been sixth, and Kamui Kobayashi came sixth as a result. It also rescued Kimi Räikkönen's race, who was heading for tenth, but came seventh. Sergio Pérez, Daniel Ricciardo, Paul di Resta and Jean-Éric Vergne came in from eighth to eleventh, separated by less than four tenths of a second.

The full entry list for the 2012 Australian Grand Prix is shown below:

* Sergio Pérez was relegated five places for a gearbox change.

Retrieved from "https://f1.fandom.com/wiki/2012_Australian_Grand_Prix?oldid=81018"
Community content is available under CC-BY-SA unless otherwise noted.