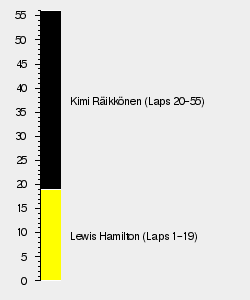 The action-packed race was won by Lotus-Renault driver Kimi Räikkönen, his first win since the 2009 Belgian Grand Prix. Fernando Alonso finished second, from sixth on the grid. Sebastian Vettel, who started from the pit-lane, finished third.

Lewis Hamilton, who started the race from pole position, retired from the lead with an engine malfunction. Nico Hülkenberg, Nico Rosberg, Narain Karthikeyan, Mark Webber and Romain Grosjean all retired as a result of collisions. Charles Pic also retired in the latter stages of the race.

The result shortens the Drivers' and Constructors' leads of Vettel and Red Bull to 10 and 82 points respectively, meaning that Red Bull only need five points from the United States Grand Prix to secure a third consecutive World Constructors' Title.

Leading the Constructors' World Championship is Red Bull-Renault, a lead which they have held since the Bahrain Grand Prix in April. 91 points behind are Ferrari. Ferrari must outscore Red Bull by at least 6 points in order to avoid handing the title to Red Bull at this event.

The lead of the Drivers' Championship is held by Sebastian Vettel, 13 points ahead of Fernando Alonso. Despite Alonso holding a 40-point lead after Hungary in July, Vettel has closed up the gap and taken the lead following 4 consecutive wins in Singapore, Japan, Korea and India. Regardless of results at this event, the title cannot be decided before the 2012 United States Grand Prix.

The full entry list for the 2012 Abu Dhabi Grand Prix is shown below:

* Pedro de la Rosa failed to start the formation lap as a cord from one of his tyre blankets was caught up in the wheel. He started from the pit lane behind Sebastian Vettel. Narain Karthikeyan did not move up the grid.

† Sebastian Vettel originally qualified 3rd, but was excluded from qualifying for failing to return to the pits under the car's own power. He started from the pit lane.