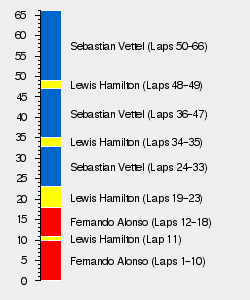 The 2011 Spanish Grand Prix (officially Formula 1 Gran Premio de España Santander) was race 5 of the 2011 Formula One Season. It took place on May 22 2011 at the Circuit de Catalunya and was won by Red Bull-Renault driver Sebastian Vettel. Lewis Hamilton was second for McLaren-Mercedes and Jenson Button finished third for McLaren-Mercedes