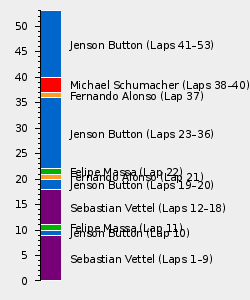 The 2011 Japanese Grand Prix (officially XXXVII Japanese Grand Prix ) was race number 15 of the 2011 Formula One Season. It took place at the Suzuka Circuit on October 7 2011. The race was won by McLaren-Mercedes driver Jenson Button with Fernando Alonso for Ferrari in second and Sebastian Vettel of Red Bull-Renault in third.

The full entry list for the 2011 Japanese Grand Prix is outlined below:

Retrieved from "https://f1.fandom.com/wiki/2011_Japanese_Grand_Prix?oldid=73435"
Community content is available under CC-BY-SA unless otherwise noted.