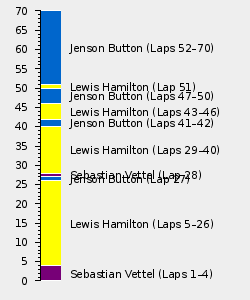 The 2011 Hungarian Grand Prix, or formally the XXVII Eni Magyar Nagydij was the 11th round of the 2011 Formula One Season, and the 26th Hungarian Grand Prix. The race was held on the 31st of July 2011. It was won by Jenson Button on his 200th Grand Prix, while polesitter and Championship leader Sebastian Vettel followed behind in second, and Fernando Alonso secured his fourth successive podium with third place. Felipe Massa set the fastest lap. Toro Rosso, celebrating their 100th Grand Prix, ended the race with both drivers in the points.

* Sébastien Buemi was deducted five places for causing an avoidable collosion in the previous race, the German Grand Prix.

Retrieved from "https://f1.fandom.com/wiki/2011_Hungarian_Grand_Prix?oldid=50825"
Community content is available under CC-BY-SA unless otherwise noted.