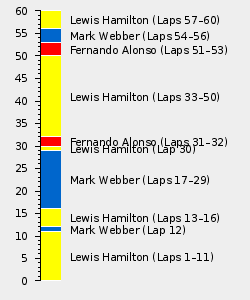 The 2011 German Grand Prix was a Formula One race held on the 24th of July at the Nürburgring, in Nürburg, Germany. It was the tenth round of the 2011 Formula One Season. The race was won by McLaren-Mercedes driver Lewis Hamilton from second on the grid, who also set the fastest lap. Fernando Alonso, of Ferrari, came home second, followed in third place by Red Bull-Renault polesitter Mark Webber, who has finished in third place for the fourth race running. The championship leader, Sebastian Vettel finished fourth.

* Vitantonio Luizzi was relegated five places for an extra gearbox change (did not change grid slot).
** Sébastien Buemi's qualifying times were removed and he was sent to the back of grid because of fuel irregularities (16th to 24th).

Retrieved from "https://f1.fandom.com/wiki/2011_German_Grand_Prix?oldid=62935"
Community content is available under CC-BY-SA unless otherwise noted.