Start a Wiki
This article is a stub. You can help the Formula One Wiki by expanding it. 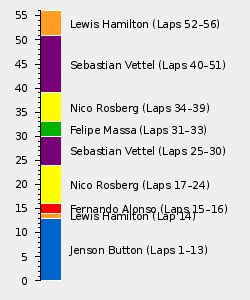 Heading into the Chinese GP, Sebastian Vettel held a 24 point lead after winning the first two races of the season. Jenson Button was ranked 2nd in the championship after scoring a runner up position in the previous race. Webber and Hamilton were the next two drivers in the standings with 22 and 20 points respectivly.

While in the constructors championship, Red Bull led McLaren by 24 points while Ferrari was more than doubled Red Bull score after the opening two rounds.

Retrieved from "https://f1.fandom.com/wiki/2011_Chinese_Grand_Prix?oldid=50817"
Community content is available under CC-BY-SA unless otherwise noted.