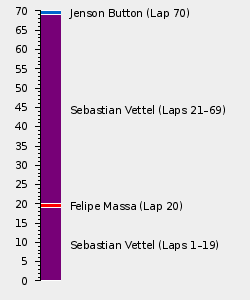 The 2011 Canadian Grand Prix, formally the Formula 1 Grand Prix du Canada 2011, was a Formula One held on the 12th of June. It was won by McLaren-Mercedes driver Jenson Button. Button only lead the final lap, and with 30 laps to go, he was 21st, last, and over 50 seconds behind the then race leader, polesitter Sebastian Vettel, who came second in his Red Bull-Renault, having led 68 of the 70 laps. The final podium spot was taken up by Vettel's team-mate Mark Webber. Button also set the fastest lap. The race was the longest in Formula One history, at 4 hours, 4 minutes, and 39.537 seconds, the race being stopped due to rain for 2 hours and 4 minutes on lap 25. This race also had the largest number of safety car periods, with six, totalling 32 laps – 45% of the race.

Retrieved from "https://f1.fandom.com/wiki/2011_Canadian_Grand_Prix?oldid=50821"
Community content is available under CC-BY-SA unless otherwise noted.