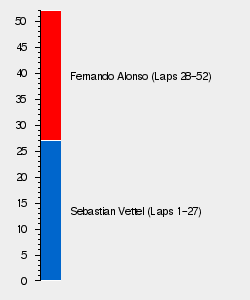 The 2011 British Grand Prix was a Formula One race held on the 10th of July at Silverstone. It was won by Fernando Alonso in his Ferrari. Second was championship leader Sebastian Vettel, and third was Vettel's teammate, polesitter Mark Webber.

Daniel Ricciardo made his début for HRT in this race.

Retrieved from "https://f1.fandom.com/wiki/2011_British_Grand_Prix?oldid=57077"
Community content is available under CC-BY-SA unless otherwise noted.