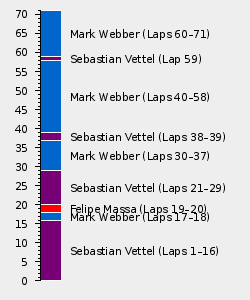 The 2011 Brazilian Grand Prix, officially the Formula 1 Grande Prêmio Petrobras do Brasil 2011, is a Formula One race to be held on the 27th of November 2011. It is the nineteenth and final round of the 2011 season. Sebastian Vettel in his Red Bull-Renault took a record-breaking 15th pole position in a single, beating Nigel Mansell's 1992 record of 14. Red Bull locked out the front row, and Rubens Barrichello, in what was his last race, qualified 12th.

In the race, Mark Webber won his only race of 2011, after Vettel struggled with gearbox issues and was forced to cede position at about halfway to allow the healthy Red Bull through. Vettel nursed his car home to second place, and Jenson Button, in his McLaren-Mercedes, came home in third. Button's team-mate, Lewis Hamilton, also had gearbox troubles but had to retire. Ferrari's Fernando Alonso came home in fourth, after a promising first half of the race. Webber set the fastest lap on the final lap of 2011. Rubens Barrichello came home 14th, after a race ruined by an awful start.

Retrieved from "https://f1.fandom.com/wiki/2011_Brazilian_Grand_Prix?oldid=81014"
Community content is available under CC-BY-SA unless otherwise noted.