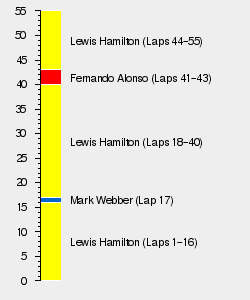 The 2011 Abu Dhabi Grand Prix, or formally the III Etihad Airways Abu Dhabi Grand Prix is the 18th and penultimate round of the 2011 Formula One Season. The race was held on the 13th of November. Sebastian Vettel, in his Red Bull-Renault took a record-equalling pole position (see Milestones section below), beating Lewis Hamilton's best lap time by 0.141 seconds. Williams had the worse qualifying in their history, locking out the back row.

In the race, Vettel's right rear tyre had a puncture before the second corner, forcing him off the track after just 400 metres, and after getting back to the pits, he retired. This left Hamilton in the lead, and only Ferrari's Fernando Alonso, who managed to bring himself up to second by the end of lap one, was able to put up any challenge. Hamilton strolled to victory by eight seconds over Alonso. Jenson Button, despite mid-race KERS issues, completed the podium, meaning McLaren-Mercedes had two drivers on the podium, and Red Bull did not have one driver on the podium for the first time since the 2010 Korean Grand Prix, which was also Vettel's last non-finish. Mark Webber set the fastest lap, as he completed a three-stopper, meaning he was on the softer compound for the latter stages of the race, while everyone else used the harder medium compound and were not as quick as him.

"DNP" means did not practice in that session

* Pastor Maldonado and Rubens Barrichello were deducted 10 places for using a ninth engine this season.

Sources and other pages[]

This article is a featured article.
This was the Formula 1 Wiki's Featured Article on 3 January 2012.