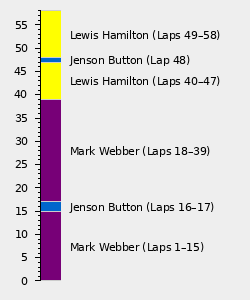 The VI Türkiye Grand Prix'si, otherwise known as the 2010 Turkish Grand Prix, was the seventh round of the 2010 FIA Formula One World Championship, staged at the Istanbul Park Racing Circuit in Istanbul, Turkey, on 30 May 2010.[1][2] The race would see Lewis Hamilton lead Jenson Button to a McLaren-Mercedes one-two, after a controversial collision between the two leading Red Bull-Renaults in the closing stages.[2]

Qualifying would see Mark Webber secure his third straight pole position, beating Hamilton to the top spot on the grid.[2] Sebastian Vettel would then share the second row with Button, while the two Mercedes' of Michael Schumacher and Nico Rosberg shared the third row.[2]

Webber duly aced his start to claim an early lead, while Hamilton got some wheelspin and was comparatively sluggish.[2] That allowed Vettel to lunge inside the #2 McLaren for second at the first corner, although Hamilton remained glued to the tail of the Red Bull and shot back past at turn three.[2]

Further back Schumacher would get the jump on Button, only for the Brit to move back ahead on the back straight.[2] There would also be action further down as Pedro de la Rosa and Sébastien Buemi exchanged blows, resulting in Nico Hülkenberg puncturing the Swiss racer's tyre when the Toro Rosso-Ferrari rejoined.[2]

The race soon settled, with Webber coming under fire from Hamilton but managing to repulse his attacks, while Vettel stalked the pair of them in third.[2] Elsewhere, Fernando Alonso would ease up the field after his poor qualifying performance, while Hülkenberg was pushing his way past the new constructors at the back of the field.[2]

The balance at the head of the field ebbed and flowed, with the Red Bulls visibly quicker in the corners, but the Mercedes engined cars amongst them quicker on the straights.[2] Indeed, the F-ducts on the McLarens were proving particularly effective, allowing Hamilton and Button to continuously harass them at the end of the long run to turn twelve.[2] However, McLaren soon became aware that their duo were burning through their fuel at an alarming rate, and hence instructed both of them to ease off before their first stops.[2]

Vettel was the first of the leaders to stop on lap fifteen, while Webber led Hamilton in on the following tour.[2] Button would remain out for two additional laps before making his stop, although both he would find himself stuck behind teammate Hamilton as the #2 McLaren had been passed by Vettel with the undercut.[2]

The second stint saw Webber and Vettel ease clear of the two fuel restricted McLarens, albeit after Hamilton tried and failed to make a move on the #5 Red Bull stick.[2] A fair gap then followed before the two Mercedes appeared, Schumacher ahead of Nico Rosberg, with Robert Kubica on their tail, while Alonso had breached the top ten.[2]

As the race wore on Webber and Vettel were both issued with warnings from Red Bull about their fuel use, prompting Webber to call for the team to tell his young teammate to hold station.[2] The request was refused, Vettel claiming that he was under too much pressure from the shadowing McLarens, and duly went on the attack against his teammate.[2]

Vettel made his attack on lap 40, taking advantage of the fact that Webber was in a fuel saving mode to get a run on the sister car.[2] He duly sent a lunge at Webber as they ran towards the braking zone for turn twelve, although movement from both caused them to touch.[2] The contact broke Webber's front wing and sent Vettel pirouetting off the circuit with a punctured tyre, resulting in the German almost wiping out the Australian racer as Webber scrambled back onto the circuit.[2]

With that the race was effectively over, with Hamilton and Button sweeping past to claim the lead, while Webber stopped for repairs.[2] Indeed, Button informed his team that he would not attack Hamilton having seen that his tyres were struggling through turn eight, although the two Brits would fight for the lead for a couple of laps, with Button briefly holding the lead before surrendering it back to Hamilton.[2]

Hamilton duly claimed victory ahead of Button, with yellow flags blossoming around the circuit as Alonso hit Vitaly Petrov at the bottom end of the top ten.[2] Elsewhere, Webber was a distant third ahead of Schumacher, Rosberg kept Kubica at bay for fifth, while Felipe Massa, Alonso, Adrian Sutil and Kamui Kobayashi claimed the remaining points.[2]

Mark Webber moved to the top of the Championship after his second straight win, moving onto 78 points for the campaign. Sebastian Vettel was level with his teammate on 78 points, although his one win to the Australian's two meant he was behind. Fernando Alonso was next after his post-race promotion, three off the lead, while Jenson Button and Felipe Massa completed the top five.

In the Constructors Championship Red Bull-Renault had emerged at the head of the pack after their second successive one-two, leaving Monte Carlo on 156 points. That translated to a twenty point lead over Ferrari, while the Italian squad had a seven point advantage over McLaren-Mercedes. Mercedes were next ahead of Renault, with four teams still yet to score in 2010, including all three of the new constructors.

The full entry list for the 2010 Turkish Grand Prix is shown below:

The full qualifying results for the 2010 Turkish Grand Prix are outlined below:

The full results for the 2010 Turkish Grand Prix are outlined below:

Mark Webber had retained the lead in the Championship after his podium finish in Turkey, although his tally of 93 could have been higher had it not been for his brush with his teammate. Behind, Jenson Button had climbed back up into second, five off the lead, while Lewis Hamilton had ascended to third on 84 points with his first win of the campaign. Fernando Alonso and Sebastian Vettel were next, five and six points respectively off the back of Hamilton, with seventeen drivers on the board.

In the Constructors Championship McLaren-Mercedes had moved to the head of the pack, leaving Turkey on 172 after their second one-two of the campaign. Red Bull-Renault made way for them as the former leaders, slipping a point behind, while Ferrari had slipped to third on 146. Mercedes, meanwhile, had moved through the 100 point mark in fourth, Renault had retained fifth, while BMW Sauber-Ferrari had claimed their first points of the season in ninth.