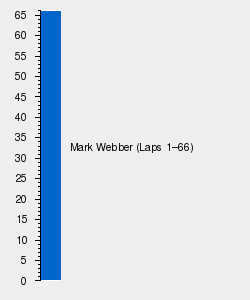 The 2010 Spanish Grand Prix, officially the Formula 1 Gran Premio de España Telefónica 2010, was the fifth race of the 2010 FIA Formula One World Championship, which took place at the Circuit de Catalunya in Barcelona, Spain, on 9 May 2010.[1][2] The race would see Mark Webber announce himself as a title contender as he stormed to victory, ahead of home hero Fernando Alonso.[2]

Webber would be the star of the show throughout the weekend, topping all three phases in qualifying as he claimed pole position.[2] His Red Bull-Renault teammate Sebastian Vettel would claim second ahead of Lewis Hamilton, while Alonso would start from fourth ahead of Championship leader Jenson Button.[2]

The start of the race saw some formation flying off the grid by the two Red Bulls, with Webber easing ahead of Vettel.[2] They would, however, have to fend off a pincer manoeuvre from Hamilton and Alonso on the brakes into the first corner, while Button and Michael Schumacher squabbled for fifth.[2]

A series of minor skirmises would entertain on the opening tour, with Robert Kubica and Kamui Kobayashi kissing wheels, resulting in both spinning and hence cause Nico Rosberg to have to take avoiding action.[2] Elsewhere, Pedro de la Rosa and Sébastien Buemi clashed to leave the Swiss racer with a punctured tyre and de la Rosa with damaged suspension, while Bruno Senna flew into the barriers on his own.[2]

After that the race would quickly settle into a procession, with Webber easing clear of Vettel, Vettel inching ahead of Hamilton, while Alonso remained glued to his former teammate's tail.[2] Indeed, the only changes to the order came at the back of the field, with the first and only round of stops coming on lap fifteen.[2]

The en-masse change to harder compound tyres would work well for Hamilton, or the Brit managed to jump ahead of Vettel to claim second.[2] The sister car of Button would have a poor stop and hence drop behind Schumacher, although the German racer would make an aggressive lunge across the nose of the #1 McLaren as he passed, causing Button to explode on his radio.[2]

With that the order settled once again, with Webber able to keep Hamilton at arm's length, while Alonso stalked Vettel for third.[2] Elsewhere, Karun Chandhok would cause havoc for several drivers, first by damaging Felipe Massa's front wing when the Brazilian tried to lap him (which miraculously improved his pace), before whacking the back of Jaime Alguersuari when the Spaniard chopped across him.[2]

The closing stages of the race would finally see some action at the head of the field, as Vettel ran wide after escaping from Alonso, although he later cited a brake issue.[2] He duly stopped for new tyres having bounced across the gravel, gifting third to Alonso as the #5 Red Bull rejoined in fourth, although the German racer would nurse his car to the flag.[2]

Then, on the penultimate lap, Hamilton was the driver in trouble, skating off the circuit at turn three courtesy of a front left tyre failure.[2] The #2 McLaren would go bouncing across the gravel before impaling itself in the barriers, leaving Alonso in second as the Brit climbed out of the cockpit.[2]

With that the race was run, with Webber cruising to the chequered flag after a dominant display to claim victory ahead of Alonso.[2] Vettel was a distant third to complete the podium, while Schumacher kept a frustrated Button at bay for fourth.[2] Massa was sixth to cause some confusion for Ferrari after his pace improved with a broken front wing, with Adrian Sutil, Kubica, Rubens Barrichello and Alguersuari claimed the remaining points.[2]

Victory propelled defending Champion Jenson Button to the top of the Championship hunt as the first fly-away races came to a conclusion, moving onto 60 points. Nico Rosberg, meanwhile, had shot up to second, ten off the lead, and a point ahead of both Fernando Alonso and Lewis Hamilton, who were level on 49. Sebastian Vettel then completed the top five, while Vitaly Petrov was on the board for the first time in his career in twelfth.

In the Constructors Championship Button's victory had moved McLaren-Mercedes to the head of the field, moving onto 109 points after four rounds. Ferrari had made way for them and dropped to second on 90 points, while Red Bull-Renault had held onto third, 36 off the lead. Mercedes were next ahead of Renault, while Force India-Mercedes, Williams-Cosworth and Toro Rosso-Ferrari completed the scorers list.

The full entry list for the 2010 Spanish Grand Prix is shown below:

The full qualifying results for the 2010 Spanish Grand Prix are outlined below:

The full results for the 2010 Spanish Grand Prix are outlined below:

Jenson Button would remain at the head of the Championship hunt after the opening European round of the season, although his advantage had been reduced. Indeed, Spanish ace Fernando Alonso had reduced the gap to just three points at his home race as he shot to second, and moved seven ahead of Sebastian Vettel in third. Race winner Mark Webber was next ahead of Nico Rosberg as the last of those over 50 points for the campaign, with Lewis Hamilton and Felipe Massa a point behind.

In the Constructors Championship McLaren-Mercedes had retained their lead at the head of the field, although their advantage had been cut to just three points. Indeed, Ferrari had smashed through the 100 point barrier as they closed on their Anglo-German rivals, with Red Bull-Renault just three further behind in third. Mercedes were next up on 72 points, while Renault rounded out the top five.