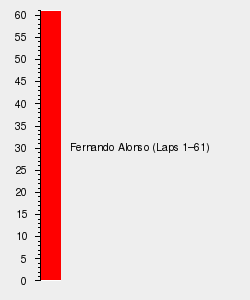 The 2010 Singapore Grand Prix, otherwise known as the III SingTel Singapore Grand Prix, was the fifteenth race of the 2010 FIA Formula One World Championship, staged at the Marina Bay Street Circuit in Singapore on 26 September 2010.[1][2] The race would see Fernando Alonso sweep to victory to enhance his bid for the title, as Lewis Hamilton retired for the second straight race.[2]

Alonso had aced qualifying to claim pole position for the race, beating Sebastian Vettel by half a tenth.[2] Hamilton and his McLaren-Mercedes teammate Jenson Button would share the second row, while Championship leader Mark Webber would launch from fifth alongside Rubens Barrichello.[2]

The start of the race would see Alonso ease clear off the grid to claim the lead, surviving a lunge from Vettel into turn one to solidify his grip.[2] Behind, Button attacked Hamilton and briefly laid claim to third, before the #2 McLaren managed to elbow its way back ahead, while Barrichello would slip to eighth.[2]

There was more action further around the opening lap, as Nick Heidfeld tried a double move on the two Force India-Mercedes, and only succeeded in tapping the back of Sutil.[2] That broke Heidfeld's front wing before Vitantonio Liuzzi hit the back of Heidfeld's car and broke his own front wing, with the German's #22 BMW Sauber-Ferrari limping back to the pits for repairs.[2]

The early laps would see Felipe Massa make a very early swap to medium compound Bridgestones, as Alonso tried to escape Vettel.[2] However, his escape would be halted by an appearance for the Safety Car as Liuzzi pulled off the circuit having slapped the wall, resulting in Webber making an early stop along with several others at the back of the field.[2]

Webber questioned Red Bull's decision as the field sprinted away for the restart, for he was placed among the backmarkers on a circuit it was notoriously difficult to overtake on.[2] He would however, deal with Timo Glock and Kamui Kobayashi quickly to get back into the top ten, as Alonso eased clear of Vettel at the head of the field.[2]

Alonso's break was a brief one, however, for Vettel would react as the pair began exchanging barrages of fastest laps.[2] Their plan was to get enough of a gap over Webber as the Australian racer no longer had to stop, as behind Glock's Virgin-Cosworth was passed by a cluster of cars having briefly ran in the top ten.[2]

Hamilton also received a call to push to keep ahead of Webber, although the Brit's rear tyres were struggling with the pace and causing him to slide.[2] He subsequently became the first of the leaders to stop, and rejoined behind Webber, while Alonso and Vettel pitted a lap later and remained ahead.[2]

The rest of the stops would see Webber climb up to third behind the #4 Ferrari and the sister Red Bull, as behind Kobayashi triggered a second safety car.[2] The Japanese racer would try a lunge at Michael Schumacher into turn eighteen but instead crashed into the barriers, with Bruno Senna sliding into the barriers alongside him having failed to react fast enough.[2]

The restart would see Alonso again ease clear of Vettel, while Webber found himself struggling to keep Hamilton at bay, resulting in contact that left the Brit with a puncture and, ultimately, a retirement.[2] Elsewhere, Schumacher would run into the back of Heidfeld with enough force to put the Sauber-Ferrari into the barriers, although there would be no interruption to proceedings.[2] Heikki Kovalainen, meanwhile, would have a fire erupt at the back of his car, which he would extinguish himself after pulling aside on the start/finish straight.[2]

The final lap saw Vettel close right onto Alonso's tail, although the Spaniard would keep his lead through to the chequered flag.[2] Vettel was next ahead of Webber, while Button claimed a lonely third ahead of Rosberg and Barrichello.[2] Robert Kubica was next ahead of Massa, while Adrian Sutil and Nico Hülkenberg completed the scorers.[2]

Mark Webber moved back to the top of the Championship after the Italian Grand Prix, establishing a five point lead at the head of the hunt. A non-score for Lewis Hamilton meant he dropped to second for the lead, while Fernando Alonso had climbed to third after his win. Jenson Button, meanwhile, had remained in fourth, slipping a point behind Alonso, while Sebastian Vettel was the fifth man in the title hunt, 22 off the lead.

In the Constructors Championship Red Bull-Renault had extended their lead at the head of the hunt, opening out a three point advantage as the European phase of the season drew to a close. McLaren-Mercedes were still their biggest threat in second, while Ferrari had again clawed themselves back into the hunt in third, moving onto 290 points. Mercedes were next ahead of Renault, while the three new constructors had once again failed to score.

The full entry list for the 2010 Singapore Grand Prix is shown below:

The full qualifying results for the 2010 Singapore Grand Prix are outlined below:

The full results for the 2010 Singapore Grand Prix are outlined below:

* Sutil received a twenty second time penalty for leaving the track and gaining an advantage.[5]

Mark Webber had retained his lead in the Championship as a result of the Singapore Grand Prix, and would become the first driver to surpass 200 points in a single season courtesy of the new-for-2010 points system. His closest challenger appeared in the form of Fernando Alonso, eleven behind, while Lewis Hamilton was a further nine behind after slipping to third. Sebastian Vettel was next, a point behind the Brit, while Jenson Button was a further four behind in fifth.

In the Constructors Championship Red Bull-Renault had moved onto 383 points after a strong result, extending their lead to 24 points with four rounds to go. McLaren-Mercedes were their closest challengers, leaving Singapore on 359 points, while Ferrari had once again closed in, leaving on 319 points. Behind, Mercedes were out of the fight in fourth, and were hence in a fight for fourth with Renault for the rest of the season.