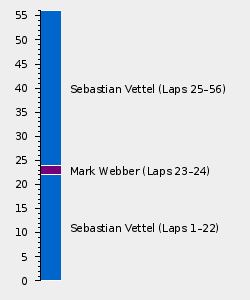 The 2010 Malaysian Grand Prix, formally known as the XII Petronas Malaysian Grand Prix, was the third round of the 2010 FIA Formula One World Championship, staged at the Sepang International Circuit in Sepang, Malaysia, on 4 April 2010.[1][2] The race would see Sebastian Vettel and Mark Webber secure a dominant one-two victory for Red Bull-Renault, having run virtually unopposed throughout.[2]

Qualifying had been a wet affair, with Webber emerging on pole position having been the only driver to gamble on intermediate Bridgestone tyres.[2] Nico Rosberg claimed second for Mercedes ahead of Vettel, while Adrian Sutil secured fourth for Force India-Mercedes.[2]

It was dry on race day although there was a significant threat of rain, resulting in everyone bar Pedro de la Rosa, whose engine had failed before he reached the dummy grid, starting on slicks.[2] The start itself would see Vettel sprint past Rosberg to claim second, before scything inside teammate Webber to claim the lead through the first corner.[2]

Webber tried to challenge through turns two and three but ultimately had to relent, although both he and Vettel would ease clear of third paced Rosberg.[2] Further back both of the McLaren-Mercedes and the Ferrari pair would make early progress from the back, moving up into the mid-teens as a quartet led by Lewis Hamilton.[2]

The early stages would see the two Red Bulls continue to move clear of Rosberg's Mercedes, while Hamilton charged through to claim a spot in the top ten by lap five.[2] He hence left the rest of the Ferrari/Mercedes group stuck behind Sébastien Buemi, who was dancing his Toro Rosso-Ferrari to deny Massa, before Hamilton caused a stir by weaving around ahead of Vitaly Petrov.[2]

Elsewhere, quick-fire retirements would thin the field, with Kamui Kobayashi, Michael Schumacher and Vitantonio Liuzzi all suffering failures before the first round of stops.[2] Button would be the man to kick-start the changes having moved onto the verge of the top ten, stopping for harder compound tyres before setting a fastest lap on his first full lap.[2]

The rest of the field would pit over the following laps, while Vettel and Webber remained out until laps 24 and 25 respectively.[2] Vettel narrowly managed to remain ahead of Hamilton, the German having exited the pits just as Hamilton came past on the start/finish straight.[2] Hamilton would, however, manage to split the Red Bulls when Webber stopped, the Brit being one of three drivers, the others being the two Ferraris, having started on hard tyres.[2]

Those three made their first stops on the following laps, with Hamilton rejoining in seventh, just ahead of Button who had shot up the order with his strategy.[2] The two McLarens duly swept onto the back of Sutil with ease, while they were all being caught by the two Ferraris after their stops.[2]

Indeed, with the two Red Bulls in a class of their own at the head of the field it was the McLaren/Ferrari battle that stole the show for the rest of the remaining laps, with Massa passing Button before hounding Hamilton.[2] Those two engaged in their own fight behind Sutil, while Button valiantly fended off the attentions of Alonso, a battle he would ultimately win as the Spaniard's engine blew apart on the penultimate lap.[2]

With that the race was run, with Vettel cruising across the line ahead of Webber to secure a dominant one-two for Red Bull.[2] Rosberg, meanwhile, was a delighted third for Mercedes, their first podium finish as a constructor since the 1955 Italian Grand Prix, with Robert Kubica and Sutil completing the top five.[2] Hamilton was next ahead of Massa and Button, while Jaime Alguersuari and Nico Hülkenberg completed the top ten and points scorers.[2]

Fernando Alonso had retained the lead in the Championship after the second round in Australia, although his advantage at the head of the field had been cut almost in two. Indeed, Felipe Massa had moved to within four points of his teammate in second, while race winner Jenson Button had leapt into third, six off the early leader. Behind, Lewis Hamilton had slipped to fourth ahead of Nico Rosberg, while Robert Kubica had been the only driver to add their name to the scorers list in Melbourne.

In the Constructors Championship it was Ferrari who continued to lead the charge in the early stages, moving onto 70 points after two rounds. McLaren-Mercedes were still their closest combatants in second, sixteen off the lead, while Mercedes had retained third on 29. Behind, Renault were on the board for the first time in 2010 and moved into fourth, Red Bull-Renault had slipped to fifth, while Force India-Mercedes and Williams-Cosworth were the only other scorers.

The full entry list for the 2010 Malaysian Grand Prix is shown below:

The full qualifying results for the 2010 Malaysian Grand Prix are outlined below:

The full results for the 2010 Malaysian Grand Prix are outlined below:

Felipe Massa had moved to the top of the Championship as a result of the Malaysian Grand Prix, having scored 39 points through the opening three rounds. Indeed, the Brazilian driver headed the three drivers who had claimed wins in 2010, with Fernando Alonso dropping to second on 37 points, level with Sebastian Vettel, winner in Malaysia. Jenson Button was next on 35, level with Nico Rosberg, with fourteen of the 24 drivers having scored in the opening three rounds.

In the Constructors Championship Ferrari had held the initiative after the third round of the season, leaving Malaysia with 76 points. They hence had a ten point lead over McLaren-Mercedes in second, while Red Bull-Renault had streaked up to third with their Malaysian one-two. Mercedes had made way for the Austrian team and slipped to fourth, while Toro Rosso-Cosworth had added their names to the score sheet in eighth.

Retrieved from "https://f1.fandom.com/wiki/2010_Malaysian_Grand_Prix?oldid=89171"
Community content is available under CC-BY-SA unless otherwise noted.