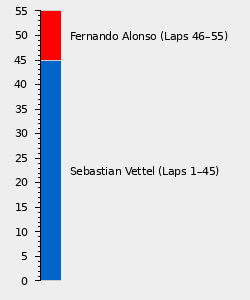 The 2010 Korean Grand Prix, formally known as the 2010 Formula 1 Korean Grand Prix, (alternately the 2010 포뮬러 1 한국 그랑프리 or the 2010 Pomyulleo 1 Hangug Geulangpeuli in Korean) was the seventeenth round of the 2010 FIA Formula One World Championship, staged at the Korea International Circuit in Yeongham, South Jeolla, South Korea, on 24 October 2010.[1][2] The race, which was the first Korean Grand Prix to be staged, would see Fernando Alonso secure his fifth win of the season to claim the Championship lead.[2]

Qualifying would see Sebastian Vettel beat teammate Mark Webber to pole position, while Alonso secured third for Ferrari.[2] Lewis Hamilton was next up in fourth for McLaren-Mercedes, while the fifth man in the title fight, Jenson Button, would start from seventh.[2]

Heavy rain would plague race morning, with Felipe Massa, Bruno Senna and Timo Glock all sliding off the circuit but scrambling back on without damage.[2] There would, however, be some late dramas for Alonso, after a water leak had to be hastily patched in the final hour before the race.[2]

The rain remained in the area as the field assembled on the grid, and after a ten minute delay it was announced that the race would start behind the Safety Car.[2] The field duly pulled away to officially start the race, although after three laps it was decided that the conditions were too dangerous on the new track surface and the race was red flagged.[2]

The rain eased during the intervention, with all of the teams switching their cars to a full wet setup.[2] With that the race resumed once again behind the safety car, remaining out for a further fourteen laps, despite the fact that Michael Schumacher, Vitantonio Liuzzi and Sakon Yamamoto had slid off during the SC.[2]

The restart saw Vettel ease into an early lead ahead of Webber, while Schumacher pounced on Robert Kubica as the only immediate overtake in the top ten.[2] Elsewhere Senna and Jarno Trulli both ran off circuit, before Nico Rosberg dived past Hamilton and Button failed to complete a lunge around the outside of Massa.[2]

The early stages saw Vettel continue to escape from Red Bull-Renault teammate Webber, with Alonso trailing ahead of Rosberg, Hamilton, Massa and Button.[2] Alonso would prove to be an early bottle neck as he slowly built up pace, before Webber slid wide a turn twelve, only to rejoin and smack Rosberg out of the race.[2]

Debris from that accident triggered another safety car period, remaining out until lap 23 with Vettel again slithering into a the lead.[2] The German racer duly re-established a healthy advantage over the following laps, as compatriot Schumacher eased past Button for fifth.[2]

The order settled once again, before Sébastien Buemi triggered another SC by losing control and hitting Timo Glock on lap 31.[2] That intervention would see the majority sweep into the pits for intermediate tyres, with Alonso losing second to Hamilton after a slow stop.[2]

The restart would again see Vettel leap ahead, while Massa was instructed to drop his pace and allow Alonso to harass Hamilton without pressure from behind.[2] The Spaniard duly sneaked past the Brit into the first corner as Hamilton ran wide, before sprinting away to challenge Vettel for victory.[2]

Light would fade drastically in the closing stages of the race, resulting in Vettel complaining to his team about light levels messing with his braking points.[2] However, with a handful of laps to go that became academic, as an engine issue saw his pace collapse and ultimately cause him to retire, leaving Alonso in the lead.[2]

With that the race was run, with Alonso establishing a fourteen second lead over Hamilton as he swept to victory after almost three hours.[2] Behind Hamilton came Massa to complete the podium, with Schumacher finishing fourth ahead of Kubica.[2] Vitantonio Liuzzi was next ahead of Rubens Barrichello, with Kamui Kobayashi, Nick Heidfeld and Nico Hülkenberg claiming the remaining points.[2]

There had been another shuffle to the Championship as the season rapidly drew towards its conclusion, although Mark Webber had established a small lead at the head of the field. The Australian racer would leave Japan with a fourteen point advantage over Fernando Alonso and Sebastian Vettel, with Alonso deemed to be ahead courtesy of four wins to Vettel's three. Lewis Hamilton was next having slipped 28 points off the lead, while Jenson Button was a dark horse for the crown in fifth on 189.

In the Constructors Championship Red Bull-Renault had again managed to extend their lead at the head of the hunt, opening out a 45 point lead with three rounds to go. McLaren-Mercedes were next as their main challengers, while Ferrari would need a strong race in Korea to remain in the hunt in third. Mercedes were next ahead of Renault, with nine of the twelve constructors having scored.

The full entry list for the 2010 Korean Grand Prix is shown below:

The full qualifying results for the 2010 Korean Grand Prix are outlined below:

The full results for the 2010 Korean Grand Prix are outlined below:

Fernando Alonso had moved to the top of the Championship as the title fight had shuffled once again, leaving the Korean circuit with 231 points to his name. Mark Webber had hence slipped to second, eleven off the lead after his non-score, while Lewis Hamilton had moved back into third on 210. Sebastian Vettel was next having also failed to score, and hence had slipped 25 off the lead, while Jenson Button was still mathematically in the hunt but would have to take two wins and see his rivals all fall by the wayside.

In the Constructors Championship Red Bull-Renault had managed to hold their lead at the head of the field, although their non-score in Korea had left them on 426 points. McLaren-Mercedes had hence closed the gap to 27 points in second, while Ferrari had remained in the hunt in third, moving onto 374 points. Behind, Mercedes had extended their advantage over Renault in the fight for fourth, while the three new teams were running out of time to score points in 2010.