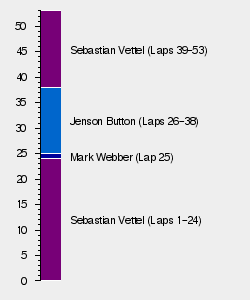 The 2010 Japanese Grand Prix, formally known as the 2010 Formula 1 Japanese Grand Prix (alternately 2010 F1日本グランプリ or the 2010 F1 nipponguranpuri in Japanese) was the sixteenth race of the 2010 FIA Formula One World Championship, staged at the Suzuka Circuit in Mie Prefecture, Japan, on 10 October 2010.[1][2] The race would see Sebastian Vettel claim victory to enhance his bid for the Championship, as weather compacted the race weekend.[2]

Four hours later the field assembled on the grid for the start, minus Lucas di Grassi who had crashed heavily on his way out of the pits and would hence be unable to start.[2] Conditions were otherwise good and there was little to no chance of rain, with the entire top ten starting on the softer Bridgestone compounds.[2]

The start itself would see Vettel sprint away to secure the lead, while the factory Renault of Robert Kubica pulled past Webber to secure second.[2] The sister Renault of Vitaly Petrov also aced its getaway and vaulted past two entire rows, before getting caught out by a slow starting Williams-Cosworth of Nico Hülkenberg.[2]

Indeed, having jinked to avoid another car, Petrov would clip the accelerating Williams, resulting in the Renault getting spun across the circuit and into the outside wall.[2] Felipe Massa, meanwhile, would drop towards the back having had to avoid the collision ahead, before collecting Vitantonio Liuzzi at the first corner and sending both himself and the Force India-Mercedes into the gravel.[2]

Four broken cars on the circuit ensured that the Safety Car was required to clear the circuit, with Vettel suddenly appearing with a huge gap behind him.[2] Indeed, Kubica had suffered a wheel failure and stopped at the hairpin midway through the first lap, and hence meant that all five of the title pretenders would restart nose-to-tail.[2]

At the restart Vettel would keep teammate Webber at bay to secure the lead, while Fernando Alonso fended off the attentions of both of the McLaren-Mercedes for third.[2] Indeed, the two Red Bull-Renaults would scamper clear in the early laps after the restart, while Alonso, Button and Hamilton exchanged blows through to the first round of stops.[2]

The stops would see status quo at the head of the field, although Alonso would escape from the two McLarens and get closer to the Red Bulls.[2] Hamilton tried to go with him but lost third gear, hampering his pace, while Jenson Button was the last to stop and dropped to the back of the quintet, although he would quickly catch and pass the wounded Hamilton.[2]

Elsewhere, Kamui Kobayashi made a succession of pounces to pass five drivers at the hairpin, and drew the ire of Jaime Alguersuari who hit the side of the BMW Sauber-Ferrari trying a late move to block.[2] Adrian Sutil, meanwhile, would suffer an engine failure and dump oil at 130R, while Nico Rosberg pulled off at the Esses after a rear wheel came loose.[2]

With that the race was run, with Vettel able to just keep Webber at bay to the chequered flag to claim victory, and a one-two for Red Bull.[2] Alonso completed the podium having repulsed Button late on, while Hamilton was a distant fifth ahead of Michael Schumacher.[2] A bruised Kobayashi was next ahead of teammate Nick Heidfeld, while Rubens Barrichello and Sébastien Buemi secured the remaining points.[2]

Mark Webber had retained his lead in the Championship as a result of the Singapore Grand Prix, and would become the first driver to surpass 200 points in a single season courtesy of the new-for-2010 points system. His closest challenger appeared in the form of Fernando Alonso, eleven behind, while Lewis Hamilton was a further nine behind after slipping to third. Sebastian Vettel was next, a point behind the Brit, while Jenson Button was a further four behind in fifth.

In the Constructors Championship Red Bull-Renault had moved onto 383 points after a strong result, extending their lead to 24 points with four rounds to go. McLaren-Mercedes were their closest challengers, leaving Singapore on 359 points, while Ferrari had once again closed in, leaving on 319 points. Behind, Mercedes were out of the fight in fourth, and were hence in a fight for fourth with Renault for the rest of the season.

The full entry list for the 2010 Japanese Grand Prix is shown below:

The full qualifying results for the 2010 Japanese Grand Prix are outlined below:

The full results for the 2010 Japanese Grand Prix are outlined below:

There had been another shuffle to the Championship as the season rapidly drew towards its conclusion, although Mark Webber had established a small lead at the head of the field. The Australian racer would leave Japan with a fourteen point advantage over Fernando Alonso and Sebastian Vettel, with Alonso deemed to be ahead courtesy of four wins to Vettel's three. Lewis Hamilton was next having slipped 28 points off the lead, while Jenson Button was a dark horse for the crown in fifth on 189.

In the Constructors Championship Red Bull-Renault had again managed to extend their lead at the head of the hunt, opening out a 45 point lead with three rounds to go. McLaren-Mercedes were next as their main challengers, while Ferrari would need a strong race in Korea to remain in the hunt in third. Mercedes were next ahead of Renault, with nine of the twelve constructors having scored.