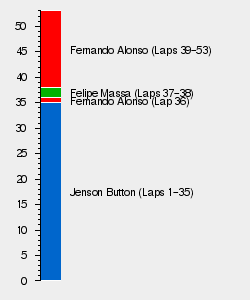 The 2010 Italian Grand Prix, officially the LXXXI Gran Premio Santander d'Italia, was race number fourteen of the 2010 FIA Formula One World Championship, which took place at the Autodromo Nazionale Monza in Monza, Italy, on 12 September 2010.[1][2] The race would see Fernando Alonso sweep to victory for Ferrari on their home turf, moving him into title contention.[2]

However, at the start of the race it was the two McLaren-Mercedes that were the cars to watch, as Button streaked into the lead, while Hamilton shot past Webber.[2] The #2 McLaren duly went on to challenge Massa at the second chicane, although he would only succeed in breaking his own suspension after hitting the side of the #3 Ferrari.[2]

The early stages would see Webber tumble back to ninth before battling back through the field, while Massa survived his early clash with Hamilton and ran on in third.[2] Elsewhere, Button was having to fend off repeated lunges from Alonso for the lead, while Kamui Kobayashi and Bruno Senna joined Hamilton on the sidelines with mechanical failures.[2]

The rest of the first stint would see Sebastian Vettel suffer from engine worries and slip back behind teammate Webber, although the Red Bull-Renault's engine power returned and allowed him to catch back up.[2] Out front, meanwhile, Button fended off Alonso's latest barrage of lunges and established a small lead, with Massa stalking them in a lonely third.[2]

The stops began on lap 36 as Button charged into the pits, handing the lead to Alonso as the Spaniard stayed out for an additional lap.[2] That lap proved crucial to Alonso's race, for he would gain time on the Brit in clear air, and duly shot out of the pits as Button drew past pit-out.[2] They duly entered the Rettifilo Chicane side-by-side, but with the better line it was the #4 Ferrari that emerged ahead.[2]

Massa would lead for two laps before making his stop, dropping back to his lonely third, while Button tried in vain to try and re-pass Alonso.[2] The Spaniard would, however, shake off the Brit's attentions and establish a small lead at the head of the field.[2]

Into the closing stages and Webber finally made a move stick on Nico Hülkenberg, although he required the assistance of the German racer as the Williams-Cosworth slid onto the grass.[2] Vettel, meanwhile, had moved into fourth after opting to hold his final stop until the final lap, with the German racer ultimately emerging still in fourth ahead of Nico Rosberg.[2]

With that the race was run, with Alonso securing an emotional win for the tifosi at Monza, with Button three seconds back in second.[2] Massa made it a double podium for the Scuderia in third, while Vettel fended off the attentions of Rosberg for fourth.[2] Webber was next up ahead of Hülkenberg and a charging Robert Kubica, while Michael Schumacher and Rubens Barrichello completed the scorers after a late, but well mannered, battle.[2]

The full entry list for the 2010 Italian Grand Prix is shown below:

The full qualifying results for the 2010 Italian Grand Prix are outlined below:

The full results for the 2010 Italian Grand Prix are outlined below:

Mark Webber moved back to the top of the Championship after the Italian Grand Prix, establishing a five point lead at the head of the hunt. A non-score for Lewis Hamilton meant he dropped to second for the lead, while Fernando Alonso had climbed to third after his win. Jenson Button, meanwhile, had remained in fourth, slipping a point behind Alonso, while Sebastian Vettel was the fifth man in the title hunt, 22 off the lead.

In the Constructors Championship Red Bull-Renault had extended their lead at the head of the hunt, opening out a three point advantage as the European phase of the season drew to a close. McLaren-Mercedes were still their biggest threat in second, while Ferrari had again clawed themselves back into the hunt in third, moving onto 290 points. Mercedes were next ahead of Renault, while the three new constructors had once again failed to score.