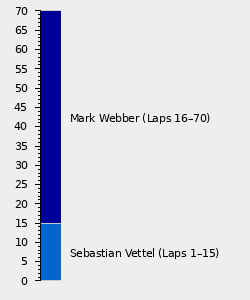 The 2010 Hungarian Grand Prix, otherwise known as the Formula 1 Eni Magyar Nagydíj 2010, was the twelfth round of the 2010 FIA Formula One World Championship, staged at the Hungaroring in Budapest, Hungary, on 1 August 2010.[1][2] The race would see Mark Webber secure his fourth victory of the campaign and claim the Championship lead, as Lewis Hamilton retired with a gearbox failure.[2]

Qualifying had seen Sebastian Vettel and Webber duel for pole position, with the German racer emerging ahead of his Red Bull-Renault teammate.[2] Fernando Alonso and Felipe Massa would share the second row for Ferrari, with all four cars receiving protests from rival teams due to the amount of flexing from their front wings.[2]

Those protests would not have an effect on the immediate race, however, as Vettel streaked away to claim an early lead at the start.[2] Behind, Alonso scythed past Webber to secure second, while Vitaly Petrov surprised Lewis Hamilton by claiming fifth at the first corner.[2]

The early stages would see Vettel sprint clear of Alonso and Webber behind, with the Spaniard visibly holding up the #6 Red Bull.[2] Behind, Massa was left to run on his own in fourth, while Hamilton reclaimed fifth from Petrov as the young Russian racer struggled to keep heat in his tyres.[2]

The order remained stable after that, until Vitantonio Liuzzi lost his front wing after unseen contact, which sent parts of Force India-Mercedes scattering across the circuit.[2] That triggered a Safety Car and an en-masse sweep into the pits, with Vettel almost crashing into the pit wall on entry having received a late call.[2] There would be chaos in the pits as Nico Rosberg lost his right rear tyre while leaving, which bounced into the Williams-Cosworth pitcrew, while Robert Kubica and Adrian Sutil collided as the Polish racer was released from his pitbox.[2]

Only Webber would opt to stay out during the SC, and duly blasted clear at the restart as Vettel drastically dropped back.[2] Indeed, the German's actions were so suspicious that he was placed under investigation for falling more than ten car lengths behind the car in-front, and was duly slapped with a drive-through penalty.[2]

With that Webber was away, setting a series of fastest laps with the aid of a higher engine mode due to his fuel saving behind Alonso earlier on.[2] Behind, Vettel would break clear of Alonso but knew he had to serve a drive through, which he duly took and dropped back behind the Spaniard.[2] Hamilton, meanwhile, would retire with a gearbox failure having been hounding Massa for fourth since the restart.[2]

Webber remained out until lap 43, by which stage he had established a 23 second lead over Alonso, who was otherwise occupied by a furious Vettel.[2] The Australian duly rejoined in the lead ahead of the squabbling duo, with that battle coming to an end late on when Vettel's tyres began to fade.[2]

Elsewhere, Michael Schumacher was having to defend heavily from former teammate Rubens Barrichello, with the Brazilian getting alongside the German veteran more than once.[2] However, Schumacher would cause a lot of outrage when he fed Barrichello towards the pitwall in the closing stages, with the Brazilian ultimately scraping between the Mercedes and the wall but without suffering damage.[2]

With that the race run, with Webber cruising through to claim victory and the Championship lead.[2] Alonso would claim second a few seconds ahead of Vettel, while Massa secured a distant fourth ahead of Petrov.[2] Nico Hülkenberg was next ahead of Pedro de la Rosa, while Jenson Button, Kamui Kobayashi and a furious Barrichello completed the scorers.[2]

Lewis Hamilton would once again extend his Championship lead once again, moving fourteen clear of teammate Jenson Button at the head of the hunt. Behind, Button had inched away from the next duo of Mark Webber and Sebastian Vettel, who had moved level on 136 points, but with the Australian ahead on three wins to the German's two. Fernando Alonso, meanwhile, had moved closer to the lead group after his controversial win, with a 29 point gap back to Nico Rosberg in sixth.

In the Constructors Championship McLaren-Mercedes had once again seen their lead reduced by a single point in Germany, leaving Hockenheim having broken the 300 point barrier. Red Bull-Renault had therefore moved 28 behind the Anglo-German alliance in second, while Ferrari had made more ground in third, moving onto 208 points after their one-two. Mercedes were next up in an increasingly lonely fourth, while Renault were just shy of the 100 point mark in fifth.

The full entry list for the 2010 Hungarian Grand Prix is shown below:

The full qualifying results for the 2010 Hungarian Grand Prix are outlined below:

Williams mechanic Nigel Hope got hit by Nico Rosberg’s car ironic ring in the depot straight in the 15th round of the race.

The full results for the 2010 Hungarian Grand Prix are outlined below: