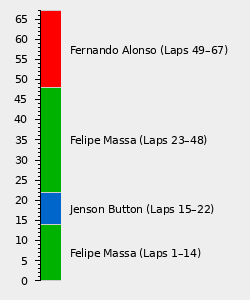 The 2010 German Grand Prix, otherwise known as the Formula 1 Grosser Preis Santander von Deutschland 2010, was the eleventh round of the 2010 FIA Formula One World Championship, staged at the Hockenheimring in Baden-Württemberg, Germany, on 25 July 2010.[1][2] The race would see Fernando Alonso claim a controversial victory for Ferrari, after team orders saw Felipe Massa move aside for the Spaniard while leading.[2]

Qualifying had seen Sebastian Vettel secure pole position ahead of Alonso, the pair having been separated by 0.002s at the end of Q3.[2] Felipe Massa was best of the rest in third ahead of the second Red Bull-Renault of Mark Webber, while the two McLaren-Mercedes shared the third row.[2]

The start of the race would see Vettel make a mess of his getaway, narrowly avoiding stalling his engine as he aggressively swept across to block Alonso.[2] Alonso, however, had already bolted and would ease ahead of the German racer into the first corner, only for Massa to sweep past the pair of them on the outside.[2]

The rest of the start proved fairly clean, albeit with Button having to stamp on the brakes to avoid Vettel's Red Bull, until the field made it to the hairpin for the first time.[2] There, Jaime Alguersuari misjudged the amount of downforce he had while braking in the middle of the pack, and duly removed the rear wing from the back of teammate Sébastien Buemi.[2]

With that the race would begin to settle down, with Force India-Mercedes opting to stop both their drivers at the end of the opening tour, only to put Vitantonio Liuzzi's tyres on Adrian Sutil's car and vice-versa.[2] Elsewhere, Toro Rosso-Ferrari would retire Buemi due to damage, while Jarno Trulli would drop off the back of the field with a gearbox issue.[2]

Out front, meanwhile, Massa was scampering away from Alonso at the head of the field, while both moved clear of third placed Vettel.[2] Indeed, the Red Bull was being seriously punished by a lack of top-end speed, although he was able to keep a very quick Hamilton at bay, with a similar battle behind being fought between Webber and Jenson Button.[2]

Those battles continued to the first round of stops, triggered when Vettel swept in for hard compound Bridgestones on lap twelve, an earlier stop then planned to try and get the German in clear air.[2] Ferrari responded with quick-fire stops for Alonso and Massa, Webber and Hamilton joining them, leaving Button in the lead and running at a faster pace then those that had stopped.[2]

Button eventually abandoned the lead on lap 22, and duly slotted in just behind Hamilton for fifth.[2] Out front, meanwhile, Massa and Alonso were exchanging blows, allowing Vettel, now in a safer third place, to close in as laps ticked away.[2]

The Massa and Alonso fight soon stagnated once Massa found some pace, although on lap 40 his advantage was all but eliminated when the Brazilian had trouble lapping the two Virgin-Cosworths.[2] Alonso hence closed right onto the back of his teammate and began asking for the team to aid him, for Vettel was also beginning to close the gap.[2]

On lap 48 Massa received a message from his engineer Rob Smedley, informing him that "Fernando is faster than you. Can you confirm you understood that message?".[2] On the following lap Massa moved aside to gift Alonso the lead into turn six, causing eyebrows to be raised, before Smedley apologised to his drive to set off a lasting rumble through the paddock.[2]

With that the race was run, for Alonso was able to ease clear of his teammate to claim victory while Massa kept Vettel at bay to secure second.[2] Behind, Hamilton and Button completed the top five ahead of Webber, while Robert Kubica, Nico Rosberg, Michael Schumacher and Vitaly Petrov completed the top ten.[2]

After the race the FIA, at the behest of several teams, would investigate Ferrari's radio messages, and duly concluded that there had been team orders, which had been outlawed since 2002 after the Scuderia's abuse of them.[2] The result was a $100,000 fine for Ferrari although the final race results would stand, and, after a series of appeals and discussions, led to the lifting of the ban on team orders for the 2011 season onward.[2]

Lewis Hamilton had seen his Championship lead grow for a second time, as it once again doubled for the second time in two races. He hence left his home race heading a British one-two, twelve ahead of teammate Jenson Button, while Mark Webber was a further five behind in third. Sebastian Vettel was next, seven off the back of his teammate, while Fernando Alonso was fifth on 98 points.

In the Constructors Championship McLaren-Mercedes had seen their advantage slightly reduced after their home race, heading into the second half of the season with 278 points. Red Bull-Renault were next, 29 points behind the leaders, while Ferrari had slipped 113 points off the lead in third. Mercedes were next ahead of Renault, while Toro Rosso-Ferrari had slipped to the bottom of the scorers list in ninth.

The full entry list for the 2010 German Grand Prix is shown below:

The full qualifying results for the 2010 German Grand Prix are outlined below:

The full results for the 2010 German Grand Prix are outlined below:

Lewis Hamilton would once again extend his Championship lead once again, moving fourteen clear of teammate Jenson Button at the head of the hunt. Behind, Button had inched away from the next duo of Mark Webber and Sebastian Vettel, who had moved level on 136 points, but with the Australian ahead on three wins to the German's two. Fernando Alonso, meanwhile, had moved closer to the lead group after his controversial win, with a 29 point gap back to Nico Rosberg in sixth.

In the Constructors Championship McLaren-Mercedes had once again seen their lead reduced by a single point in Germany, leaving Hockenheim having broken the 300 point barrier. Red Bull-Renault had therefore moved 28 behind the Anglo-German alliance in second, while Ferrari had made more ground in third, moving onto 208 points after their one-two. Mercedes were next up in an increasingly lonely fourth, while Renault were just shy of the 100 point mark in fifth.