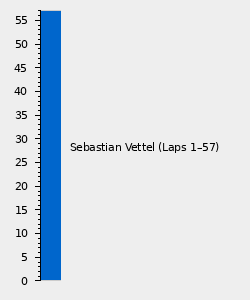 The 2010 European Grand Prix, otherwise known as the 2010 Formula 1 Telefónica Grand Prix of Europe, was the ninth round of the 2010 FIA Formula One World Championship, staged at the Valencia Street Circuit in Valencia, Spain, on 27 June 2010.[1][2] The race would see Sebastian Vettel claim a dominant victory for Red Bull-Renault, as Lewis Hamilton extended his Championship lead.[2]

Qualifying would be an all Red Bull affair, as Vettel beat teammate Mark Webber to pole position as they completed a front-row lockout.[2] Hamilton would start from third ahead of the two Ferraris, while both Renaults, both Williams-Cosworths and Jenson Button had also got into Q3.[2]

The start of the race saw Hamilton make the best start, the Brit sweeping past Webber before sending a lunge Vettel into turn two, the first corner with a braking zone.[2] That lunge resulted in contact between Vettel's right rear and the front left of Hamilton's car, damaging the Brit's front wing and knocking his front left wheel out of balance.[2]

Behind, Webber would slip behind both Ferraris and hence get into a fight with Button, with contact between the pair resulting in the #6 Red Bull spinning down to ninth.[2] Elsewhere, Vitaly Petrov plummeted to the back of the field after making a mess of his start, while contact amongst the back markers left Jarno Trulli with a broken front wing.[2]

With that the race settled down remarkably quickly, with Vettel easing away from Hamilton, while the Brit scampered clear of the Ferraris.[2] Webber, meanwhile, would find himself mired behind the two Williams-Cosworths and in a queue of cars, prompting him to make an early stop on lap seven.[2]

That stop left Webber in eighteenth behind the cluster of new cars, and hence with a huge speed differential with fresh tyres and a front running car.[2] He quickly pulled onto the back of Heikki Kovalainen on the back straight on lap nine, but got caught out by the Finn's early braking point in the inferior Lotus-Cosworth.[2]

The Red Bull slammed into the back of the green-yellow machine and was flicked into the air, striking an advertising hoarding above the circuit before slamming back onto the ground nose first.[2] Webber's car then skated into the barriers and was left shattered in the wall, although the Australian racer emerged unharmed as the Safety Car was deployed.[2]

The appearance of the SC would see several drivers make their stops immediately, including Robert Kubica and Button in fifth and sixth.[2] Hamilton, meanwhile, would cause more controversy by overtaking the SC after it was released from the pits, for it had shot out onto the circuit in between the Brit and race leader Vettel.[2]

Vettel and Hamilton would both dive into the pits for their stops and rejoin still at the head of the field, while Fernando Alonso and Felipe Massa, having remained behind the SC before stopping, would tumble down the field.[2] The restart came on lap fourteen with Vettel reclaiming the lead, fending off a run from Hamilton into turn two after a mistake in the final corner.[2]

With that the duo were away, for Alonso and Massa had emerged in the midfield and outside of the top ten, and hence were no longer a threat.[2] Vettel and Hamilton would spend the rest of the afternoon trading fastest laps, while Button battled up to third and various failures and retirements thinned the field.[2]

With that the race was run, with Vettel holding a fair lead over Hamilton through to the chequered flag, reigniting his title challenge.[2] Button completed the podium ahead of former teammate Rubens Barrichello, the pair among several drivers to be slapped with a five second time penalty for speeding behind the safety car, while Kubica finished fifth ahead of Adrian Sutil.[2] Kamui Kobayashi, Sébastien Buemi, Alonso and Pedro de la Rosa completed the scorers.[2]

Lewis Hamilton had moved to the top of the Championship hunt with his second straight victory, claiming 109 points over the opening eight rounds. Jenson Button had retained second, sitting three behind his teammate on 106 points, while Mark Webber had dropped to third on 103 points. Fernando Alonso and Sebastian Vettel were next up to complete the top five, the first of those in the field yet to breach the 100 point mark.

In the Constructors Championship it had been another very good afternoon for McLaren-Mercedes, as their one-two moved them onto 215 points for the season. Red Bull-Renault had therefore slipped 22 points behind the leaders, while Ferrari were a further 32 points behind. Mercedes were in fourth as the final team over the 100 point barrier, while Renault completed the top five.

The full entry list for the 2010 European Grand Prix is shown below:

The full qualifying results for the 2010 European Grand Prix are outlined below:

The full results for the 2010 European Grand Prix are outlined below:

Lewis Hamilton had extended his Championship lead as a result of the season's second trip to Spain, leaving Valencia with 127 points to his credit. He therefore inched six further ahead of teammate Jenson Button in second, while Sebastian Vettel had shot up to third with 115 point after his win. Mark Webber had slipped to fourth after his spectacular exit in Valenica, while Fernando Alonso completed the top five.

In the Constructors Championship McLaren-Mercedes had moved onto 248 points after their fourth double podium of the campaign, establishing a 30 point lead. Red Bull-Renault were their closest challengers after nine rounds, on 218 points, while Ferrari had slipped 83 points behind in third. Mercedes were next ahead of Renault, as none of the new constructors managed to score once again.