Formula 1 Wiki
Register
Don't have an account?
Sign In
Advertisement
in: 2010 Grands Prix, British Grand Prix, Formula One races in the United Kingdom 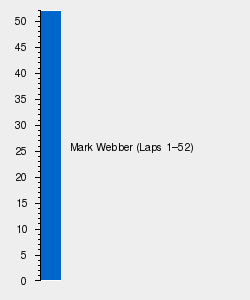 The 2010 British Grand Prix, formally known as the 2010 Formula 1 Santander British Grand Prix, was the tenth round of the 2010 FIA Formula One World Championship, staged at the Silverstone Circuit in Northamptonshire, UK, on 11 July 2010.[1][2] The race, which was staged on an extended version of the Silverstone Circuit, would see Mark Webber sweep to victory for Red Bull-Renault.[2]

With no alternative Ecclestone and FOM reopened negotiations with Silverstone, and duly signed a huge 17 year contract with the BRDC.[5] As a result the BRDC would invest heavily in the circuit, constructing a new pit-complex at Club, although that was not ready for the 2010 race, as well as a new section of track between Abbey and Brooklands.[6]

Qualifying had seen Red Bull throw a spanner into the relationship between their drivers, having taken a new front wing off of Webber's car to put on Sebastian Vettel's car, after the young German's wing had been damaged.[2] Vettel duly claimed pole position ahead of Webber, who was visibly upset by the decision, while Fernando Alonso beat home hero Lewis Hamilton to third.[2]

The start of the race would see some aggressive driving from both of the Red Bulls, as Vettel lunged across to deny Webber a run into Copse, only for the Australian racer to elbow his way inside.[2] Webber duly secured the lead while Hamilton tried to take advantage, resulting in contact between himself and Vettel that sent the #5 Red Bull skating wide with a puncture.[2]

Elsewhere, contact in the new complex would send Felipe Massa limping back to the pits with a puncture, while Lucas di Grassi retired with a hydraulics failure.[2] Out front, meanwhile, Webber would keep Hamilton at arm's length for the rest of the opening tour, while Jenson Button had made up a lot of ground after his poor performance in qualifying.[2]

The first stint would remain calm after that, with the field running largely in a procession before the first round of stops.[2] In that period Webber would extend his lead over Hamilton, while Button gained a further handful of spots having stroked out an extra four laps from his soft Bridgestone tyres.[2]

With that the race would settle down at the head of the field, although Alonso was slapped with a questionable penalty for passing Robert Kubica off-track, despite having been forced off by the Polish racer.[2] Elsewhere, Adrian Sutil and Pedro de la Rosa came to blows in the midfield, resulting in the BMW Sauber-Ferrari's rear wing falling apart on the hangar straight.[2]

That debris would spark a Safety Car, denying Alonso the chance to serve his penalty, despite the fact that Kubica had retired during the investigation and Ferrari's subsequent appeal.[2] He hence plummeted to the back of the field when he served his drive-through penalty after the restart, leaving Webber in the lead ahead of Hamilton, while Button was glued to Nico Rosberg's tail.[2]

The rest of the afternoon was spent watching the progress of Vettel, whom had been allowed to catch the back of the field as a result of the SC, having been on the verge of being lapped just before.[2] He duly carved his way back up to the points, before finding a very stubborn Sutil holding seventh, a battle that would last until the final lap.[2]

Out front, meanwhile, Webber would maintain a narrow lead to claim victory, prompting his infamous quip "not bad for a number two driver. Cheers."[2] Hamilton was next ahead of Rosberg to complete the podium, with Button, Rubens Barrichello, Kamui Kobayashi, Vettel, Sutil, Michael Schumacher and Nico Hülkenberg claiming the remaining points.[2]

Lewis Hamilton had extended his Championship lead as a result of the season's second trip to Spain, leaving Valencia with 127 points to his credit. He therefore inched six further ahead of teammate Jenson Button in second, while Sebastian Vettel had shot up to third with 115 point after his win. Mark Webber had slipped to fourth after his spectacular exit in Valenica, while Fernando Alonso completed the top five.

In the Constructors Championship McLaren-Mercedes had moved onto 248 points after their fourth double podium of the campaign, establishing a 30 point lead. Red Bull-Renault were their closest challengers after nine rounds, on 218 points, while Ferrari had slipped 83 points behind in third. Mercedes were next ahead of Renault, as none of the new constructors managed to score once again.

The full entry list for the 2010 British Grand Prix is shown below:

The full qualifying results for the 2010 British Grand Prix are outlined below:

The full results for the 2010 British Grand Prix are outlined below:

Lewis Hamilton had seen his Championship lead grow for a second time, as it once again doubled for the second time in two races. He hence left his home race heading a British one-two, twelve ahead of teammate Jenson Button, while Mark Webber was a further five behind in third. Sebastian Vettel was next, seven off the back of his teammate, while Fernando Alonso was fifth on 98 points.

In the Constructors Championship McLaren-Mercedes had seen their advantage slightly reduced after their home race, heading into the second half of the season with 278 points. Red Bull-Renault were next, 29 points behind the leaders, while Ferrari had slipped 113 points off the lead in third. Mercedes were next ahead of Renault, while Toro Rosso-Ferrari had slipped to the bottom of the scorers list in ninth.