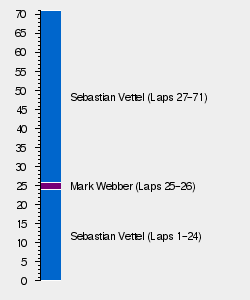 The 2010 Brazilian Grand Prix, officially the Formula 1 Grande Prêmio Petrobras do Brasil 2010, was the eighteenth and penultimate race of the 2010 FIA Formula One World Championship, which took place at the Autódromo José Carlos Pace in São Paulo, Brazil, on 7 November 2010.[1][2] The race would see Sebastian Vettel and Mark Webber claim a one-two victory and the Constructors Championship for Red Bull-Renault, and set up a four way fight for the Drivers Championship at the 2010 Abu Dhabi Grand Prix.[2]

Qualifying had been held in wet but drying conditions, resulting in Nico Hülkenberg taking a surprise pole position for Williams-Cosworth, the first and only of his career.[2] Behind, the two Red Bull-Renaults of Vettel and Webber would claim second and third ahead of Lewis Hamilton, while Championship leader Fernando Alonso claimed fifth on the grid.[2]

It was dry on raceday with no rain expected, although that was of little consolation for Hülkenberg, who got too much wheelspin and was slow away.[2] That allowed Vettel to blast around the outside to claim the lead into the Senna S, while Webber was too distracted keeping Hamilton at bay to challenge for second.[2]

Webber duly seized second later around the opening lap as Hülkenberg slid wide, while Hamilton was struggling and hence had to defend from Alonso.[2] Behind, Jenson Button, the dark horse in the title fight, would rise to eighth from eleventh, while Michael Schumacher slid down the field after running onto the grass.[2]

The early stages saw the two Red Bulls ease clear at the head of the field, while Alonso scampered ahead of Hamilton before bearing down on Hülkenberg.[2] The German racer would repulse the Spaniard' first few attacks and allowed Hamilton to keep pace, as behind Button was passed by Schumacher and saw his hopes of retaining the title fade away.[2]

Alonso eventually forced his way past Hülkenberg on lap seven, although he faced an eleven second gap to the two Red Bulls and was unable to close.[2] Elsewhere, Hamilton was unable to get past Hülkenberg's Williams, while Button gambled on an early stop, switching to medium compound Bridgestone tyres and rejoined in eighteenth.[2]

The rest of the field slowly trickled in over the following laps, with Hamilton the first of the leaders to stop on lap 21.[2] He rejoined just ahead of Button, who had gained a lot of time using the undercut, while Alonso pitted and rejoined, still in third, on lap 25.[2] The two Red Bulls reacted over the following laps, Vettel in first ahead of Webber, while Hülkenberg dropped between the two McLarens.[2]

The order out front remained stable, although Webber would close onto the back of his teammate as the German was continuously flustered by lapped traffic.[2] Then, on lap 51 Vitantonio Liuzzi suffered a suspected suspension failure and slammed into the barriers at the Senna S, triggering a Safety Car.[2]

Hamilton and Button were the only two in the lead group to stop, with the race resuming on lap 55 with lapped cars between Vettel and his pursuers.[2] That allowed the German racer to break clear at the restart, although Webber and Alonso would quickly clear the traffic and give chase.[2]

With that the race was run, with Vettel easing clear to claim victory ahead of Webber, securing the Constructors Championship for Red Bull-Renault.[2] Alonso completed the podium ahead of Hamilton and Button, while Nico Rosberg beat teammate Schumacher to sixth.[2] Hülkenberg, meanwhile, had slipped to eighth ahead of Robert Kubica, while Kamui Kobayashi completed the scorers.[2]

As a result of the Brazilian Grand Prix the Championship situation was Alonso in first with 246 points, Webber eight behind on 238, while Vettel was on 231. Hamilton, who finished fourth in Brazil, was 24 points behind Alonso with 222 points, and was the last of the quartet capable of winning the title. This was the first time four drivers entered the final race was Championship victory possible.

Fernando Alonso had moved to the top of the Championship as the title fight had shuffled once again, leaving the Korean circuit with 231 points to his name. Mark Webber had hence slipped to second, eleven off the lead after his non-score, while Lewis Hamilton had moved back into third on 210. Sebastian Vettel was next having also failed to score, and hence had slipped 25 off the lead, while Jenson Button was still mathematically in the hunt but would have to take two wins and see his rivals all fall by the wayside.

In the Constructors Championship Red Bull-Renault had managed to hold their lead at the head of the field, although their non-score in Korea had left them on 426 points. McLaren-Mercedes had hence closed the gap to 27 points in second, while Ferrari had remained in the hunt in third, moving onto 374 points. Behind, Mercedes had extended their advantage over Renault in the fight for fourth, while the three new teams were running out of time to score points in 2010.

The full entry list for the 2010 Brazilian Grand Prix is shown below:

The full qualifying results for the 2010 Brazilian Grand Prix are outlined below:

The full results for the 2010 Brazilian Grand Prix are outlined below:

Fernando Alonso had retained his Championship lead heading into the season finale in Abu Dhabi, and would hold an eight point advantage. Mark Webber was the second man in the fight on 238 points, and would have to win with Alonso third or lower to take the title. Sebastian Vettel would arrive in Yas Marina in third, needing to outscore Alonso by sixteen to take the crown, while Lewis Hamilton would have to win and likely see none of the top three score if he was to claim his second World Championship.

In the Constructors Championship the fight was over, for Red Bull-Renault had moved 48 points clear with just 43 points left to fight for Abu Dhabi, handing them their maiden World Championship. McLaren-Mercedes hence had to console themselves with second, although they would have to fend of Ferrari at the finale. However, the Scuderia would have to outscore their Anglo-German rivals by 32 points in the finale to claim the runner-up spot, while Mercedes and Renault completed the top five.