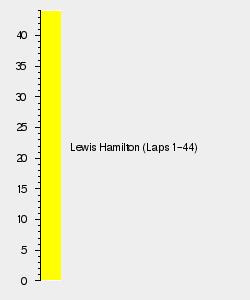 The 2010 Belgian Grand Prix (officially the 2010 Formula 1 Belgian Grand Prix) was the thirteenth round of the 2010 FIA Formula One World Championship, staged at the Circuit de Spa-Francorchamps in Spa, Belgium, on 29 August 2010.[1][2] The race, staged in variable wet-dry conditions, would see Lewis Hamilton claim victory to retake the Championship lead.[2]

Qualifying would see Championship leader Mark Webber secure pole position, beating Hamilton in a duel for top spot on the grid.[2] Behind, Robert Kubica was a surprise third for Renault ahead of Sebastian Vettel, while Jenson Button secured fifth ahead of Felipe Massa.[2]

The start of the race would see Webber make a poor start, allowing Hamilton to scamper out in front, while Kubica charged past for second.[2] Button, Vettel and Massa would also charge past the #6 Red Bull-Renault, with the former duo going on to charge past Kubica down the Kemmel Straight.[2]

The rest of the opening lap would be more messy, for sporadic showers in key places made the track treacherous and caused several drivers to make mistakes.[2] Indeed, the Bus Stop chicane would prove particularly brutal, with everyone in the top ten bar Fernando Alonso running wide.[2] Indeed, Alonso was in the pound seats to take advantage of everyone falling off around him, only to be whacked by an out-of-control Rubens Barrichello, who was making his 300th Grand Prix.[2]

Alonso scrambled back on with minor damage, with several drivers at the back of the field deciding to dive in for intermediate tyres as the Safety Car came out to clear up Barrichello's Williams-Cosworth.[2] However, even behind the safety car it was clear that the circuit was too dry overall, and hence saw those that stopped immediately pit again for slicks.[2]

The restart would see Vettel start to harass Button for second, as Hamilton blasted clear at the head of the field.[2] That fight for second would rumble on until lap fifteen, when Vettel got out of shape on the bumps at the Bus Stop and spearing into the side of the #1 McLaren-Mercedes.[2] The contact broke Vettel's nose sending him into the pits, while Button suffered terminal damage to his cooling system.[2]

Vettel later incurred a drive-through penalty for causing the Brit's retirement, making him a non-factor for the rest of the afternoon, much to his own ire.[2] On track, meanwhile, fifth placed Adrian Sutil would spark the pit-phase shortly before half-distance, with no major changes to the order resulting.[2]

Vettel again became the centre attention by making an aggressive lunge around the outside of Vitantonio Liuzzi at the Bus Stop, although in squeezing the Italian the German racer only succeeded in slicing his own rear tyre on the Force India-Mercedes' front wing.[2] Elsewhere, Sutil would power past the factory Mercedes with ease on the Kemmel Straight in the sister Force India, as the rest of the field began making calls to their pit crews for weather updates.[2]

Rain did eventually materialise, although it was so light at first that the leaders all remained out, with Hamilton, Kubica, Webber and Massa completing an additional lap.[2] That proved to be a mistake as the rain intensified drastically, with Hamilton giving himself a scare by sliding into the gravel at Rivage, and would just drag himself back on without losing the lead.[2]

The quartet duly stopped at the end of that lap, although Kubica threw away his hopes of second by sliding into his pitcrew, allowing Webber to sneak ahead.[2] Alonso, meanwhile, would cause a late safety car by crashing at the top of Malmedy, causing a late sprint to the chequered flag.[2]

Hamilton would ultimately pull clear at the restart and maintain his lead to the chequered flag, while Webber and Kubica completed the podium.[2] Massa was next ahead of Sutil, with Nico Rosberg, Michael Schumacher, Kamui Kobayashi, Vitaly Petrov and Liuzzi completing the scorers list.[2]

The full entry list for the 2010 Belgian Grand Prix is shown below:

The first practice session was held under drizzly conditions, with no driver being able to post a sub-2 minute lap. With 35 minutes to go, the rain intensified, however drivers re-emerged onto the track with minutes to go to get vital track time.

The second session was rain-free, although the clouds were ominous. Shortly into the session, Timo Glock slid into the barrier ending his session abruptly. He was not the only driver to fall victim to Spa, as Vitantonio Liuzzi ran wide into the gravel and tapped the barriers. The deeper into the session, the more representative the times became, however the session was abruptly stopped as it was reported spectators had jumped the fence and situated themselves in a dangerous position. Practice 2 restarted with just over 3 minutes remaining, with all 24 cars lined in the pit-lane. The final practice was dry for a short period, until rain stopped any chance of realistic running.

As Q1 started under sunny skies, most drivers took to the track immediately in the hope of avoiding a freak rain shower. Despite the dry track, Vitaly Petrov caused red flags early on after spinning out of a corner and tapping the barriers. After the restart, the rain started again catching out many drivers, especially at turn 14 with 6 cars either spinning or running into the gravel simultaneously. With not long to go, both Sauber drivers crashed out meaning they failed to make it to Q2. This meant that Timo Glock and Heikki Kovalainen could make it into Q2, a rarity for the usual back-of-the-grid suspects.

Dry Q2 weather meant less spins, however both Mercedes drivers failed to make it into Q3.

All 10 drivers set dry times, however with three minutes to go, spots of rain were noticed in the first sector, with some predicting that there would be no changes to the provisional grid. This proved erroneous. Felipe Massa did not improve after running well wide and so did Fernando Alonso, who started 10th. Lewis Hamilton usurped Robert Kubica into second, but could not prevent Mark Webber in taking pole position.

The full qualifying results for the 2010 Belgian Grand Prix are outlined below:

Webber made a poor start, with Hamilton taking the lead. Jenson Button contrastingly made a good start, but was held from taking second by Kubica. Button attempted an overtake into the chicane, but light rain meant he followed Hamilton off the track, as well as the rest of the top 5. This problem also led to the collision between Alonso and Rubens Barrichello, with the Brazilian rear-ending the Spaniard. Alonso was amazingly able to keep going, but Barrichello's 300th race ended in disappointment.

After a minor safety car period, Vitaly Petrov made good gains including an impressive overtake on Nico Rosberg. Rosberg was consequently slowed and there was contact between him and his Mercedes teammate. Schumacher overtook Rosberg but caught his compatriot's front wing in the process.

On lap 17, Vettel attempted an audacious move on Jenson Button, but ran off-line and lost grip. The German then spun and t-boned Button before they'd reached the chicane. Masses of steam emitting from Button's car meant he had to retire. Vettel got off with a drive-through penalty. A few laps later, he overtook Liuzzi into the chicane and although he got the move done, he clipped Liuzzi's front wing which resulted in a puncture.

On lap 35, flashes of lightning were visible, and shortly after leader Hamilton radioed in complaining about the rain, he ran wide into the gravel trap and kissed the barrier. Despite this, he kept the car rolling and rejoined the track damage-less. The majority of drivers pitted for intermediates, with Alonso almost side-swiping Vettel exiting his pit-box. Kubica overshot his box, meaning Webber could jump the Renault into second place. Shortly after a change of tyres, Alonso spun out of Les Combes and meant he had to retire. His car was perpendicular to the track, meaning the safety car was again required.

Hamilton was able to safely lead the race and take this important victory, closely followed by Mark Webber. Kubica rounded off the podium with Felipe Massa finishing fourth. Both Force India-Mercedes landed in the points, as well as the Mercedes', with Rosberg aggressively overtaking Schumacher on the last few laps. Vettel, with all of his off-track excursions finished 15th. Alguersuari would have been in the points, but was given a 20-second penalty which demoted him to 13th.

The full results for the 2010 Belgian Grand Prix are outlined below: