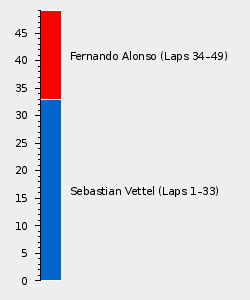 The 2010 Bahrain Grand Prix, officially the VII Gulf Air Bahrain Grand Prix was the opening round of the 2010 FIA Formula One World Championship, staged at the Bahrain International Circuit in Sakhir, Bahrain, on 14 March 2010.[1][2] The race, which was staged on a lengthened version of the Sakhir Circuit, would see Fernando Alonso secure victory on his debut for Ferrari.[2]

It had been a busy winter after the conclusion of the 2009 season, as Champion constructors Brawn were sold to Mercedes-Benz, with the German manufacturer forming their own F1 team.[3] The new factory Mercedes team duly hired an all German line-up, partnering Nico Rosberg with seven-time F1 Champion Michael Schumacher, who would race in F1 for the first time since the 2006 Brazilian Grand Prix.[3]

Elsewhere, three new constructors entered the series, with Virgin, Lotus and HRT all joining with engines from Cosworth.[4] They joined the series under the impression there would be a budget cap for the rest of the field, although negotiations between the other nine teams had faltered after they had signed up for the season.[4] Elsewhere, Toyota had cancelled both their engine and racing programmes citing costs, while BMW had officially sold their entry back to Peter Sauber.[5][6]

Qualifying would see Sebastian Vettel secure the first pole position of the season, beating a returning Felipe Massa to front of the grid by a tenth of a second.[2] Alonso was next in the second Ferrari ahead of Hamilton, Rosberg claimed fifth ahead of the second Red Bull-Renault of Mark Webber, while Schumacher would make his return from seventh.[2]

New rules for the 2010 season had resulted in a ban on refuelling during the race, meaning all of the cars would start the race with a full fuel load.[2] This may have caused an issue on Webber's car as the #6 Red Bull began issuing oil smoke as the field moved off at the start, causing some minor chaos behind.[2]

Indeed, as Vettel fended off a fast starting Alonso and Massa into the first corner, Webber's small smoke screen resulted in Adrian Sutil colliding with Kubica to send both cars spinning down the field.[2] Fortunately they would not be collected by the rest of the field and would hence rejoin, with the rest of the opening lap passing without issue.[2]

Instead the incidents would come on the following laps, largely a result of the rookie teams and drivers suffering unprecedented failures.[2] Indeed, Karun Chandhok, Lucas di Grassi, Nico Hülkenberg and Vitaly Petrov all suffered damage from kerb strikes, although only Hülkenberg would continue.[2]

Otherwise the race was fairly tame to the first round of stops, with Vettel having built enough of a lead to keep the two Ferraris at bay.[2] Behind those three Hamilton would jump Rosberg to secure fourth, Button would jump Webber, while Schumacher remained in a lonely eighth.[2]

The second round of stops produced no changes to the order out front, although Schumacher would move back ahead of Button and Webber.[2] However, the complexion of the race would change in the closing stages, as Vettel began to suffer from a brake issue, causing his pace to collapse.[2]

The #5 Red Bull's lack of pace left Vettel with little choice but to surrender the lead, with first Alonso and Massa passing with ease to claim a one-two for Ferrari.[2] Hamilton would also streak past the German racer late on to complete the podium, leaving Vettel to just keep Rosberg at bay for fourth.[2] They were chased across the line by Schumacher, Button and Webber, while Vitantonio Liuzzi and Barrichello claimed the remaining points in the revised scoring system.[2]

Going into the first race of the 2010 season saw the debut of new teams, HRT and Virgin and saw the return of the Lotus F1 team which withdrew from F1 at the end of 1994. Team Sauber also returned as Team Principal Peter Sauber had bought back the team from BMW Sauber who withdrew from F1 at the end of 2009, however he chose to race as BMW Sauber due, for otherwise the team would not receive their share of TV money.

New drivers making their début in Bahrain were Lucas Di Grassi for Virgin, Vitaly Petrov (first ever Russian F1 Driver) for Renault, Nico Hülkenberg for Williams, while Karun Chandhok and Bruno Senna (nephew of the late three time World Champion, Ayrton Senna) both made their débuts for HRT.

Seven time World Champion, Michael Schumacher made his F1 return with Mercedes GP after retiring at the end of 2006 with Ferrari. Pedro de la Rosa made his first F1 appearance with BMW Sauber also since 2006 when he filled in at McLaren for half a season when Juan Pablo Montoya quit the sport however he had not been a full fledged race driver since 2002 with Jaguar.

Refuelling was banned during a race for the first time since 1993 in F1 and a new points system took place and also increases to the top 10 drivers (previously top 8). The steward board was also now being represented by one former F1 driver as well. The first former driver to hold this place was four time World Champion, Alain Prost who started the role at the Bahrain GP.

This was the only time that the race was run on the extended circuit at Bahrain. Deviating from the old circuit just after turn four, the extension added nine corners in about 2/3 of a kilometer. Universal criticism of the new section led to the old configuration being restored in 2012.

The full entry list for the 2010 Bahrain Grand Prix is shown below:

At the start of the early morning Friday practice it was the McLarens of Lewis Hamilton and Jenson Button that lapped the quickest around the Sakhir circuit however once the Ferraris of Fernando Alonso and Felipe Massa came out of the pits, the two then quickly passed the McLarens fastest lap times and stayed there for most of the morning. However to much of the paddocks surprise the Force India of Adrian Sutil took the fastest lap time late in the session with teammate Vitantonio Liuzzi ending up seventth fastest, it showed that Force India had promise. Michael Schumacher struggled in the session with understeer and was the only driver to run off track, he finished 10th fastest two places behind Mercedes teammate Nico Rosberg. Robert Kubica was a surprise third in the Renault behind Alonso and Sutil. The Virgin of Lucas Di Grassi only managed to complete two laps until hydraulic issues forced him out of the session. HRT who would be running their car for the very first time in Bahrain were mainly assembling the two cars throughout the session which had only arrived on Thursday night however at the end of the session Bruno Senna managed to get three laps under his belt much to the delight of the HRT team. However Karun Chandhok had major hydraulic issues that would keep him out for the rest of the day.

The full qualifying results for the 2010 Bahrain Grand Prix are outlined below:

The full results for the 2010 Bahrain Grand Prix are outlined below:

Fernando Alonso had claimed the early Championship lead with victory at the opening round, and established a seven point lead as a result of the new scoring system. Felipe Massa was his closest competitor in second, while Lewis Hamilton, Sebastian Vettel and Nico Rosberg completed the early top five. Five other drivers had also claimed opening day points, namely Michael Schumacher, Jenson Button, Mark Webber, Vitantonio Liuzzi and Rubens Barrichello.

In the Constructors Championship it had been a perfect start to the season for Ferrari, as their one-two left them with a maximum score of 43 after just one race. McLaren-Mercedes would start the season in second ahead of the factory Mercedes team, while Red Bull-Renault opened their account in fourth with sixteen points. The only other scorers at the season opener were Force India-Mercedes and Williams-Cosworth.

Retrieved from "https://f1.fandom.com/wiki/2010_Bahrain_Grand_Prix?oldid=89169"
Community content is available under CC-BY-SA unless otherwise noted.