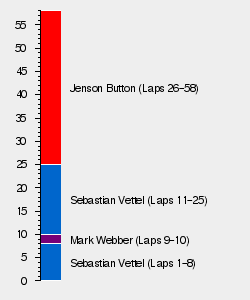 Qualifying had been an all Red Bull-Renault affair, although hopes of a home pole position for Mark Webber were dashed in Q3 as Sebastian Vettel claimed top spot on the grid.[2] Fernando Alonso of Ferrari was next ahead of Button, while Felipe Massa beat Nico Rosberg to fifth.[2]

The start of the race would be staged on a damp circuit, meaning everyone would start the race on intermediate tyres.[2] Regardless, Vettel would ease into an early lead off the grid, while a barnstorming start from Massa saw the #7 Ferrari leap into second.[2] Webber hence slipped to third ahead of another fast starter in Robert Kubica, as behind Button and Alonso made contact, resulting in the Spaniard spinning to the back of the field and being struck by Michael Schumacher.[2]

More contact came at turn three, as Kamui Kobayashi broke his front wing in an unseen incident, which duly fell off at turn six.[2] The loss of front downforce mean that the Japanese racer had trouble slowing for the left-hander, resulting in the errant BMW Sauber-Ferrari collecting Nico Hülkenberg and Sébastien Buemi and removing both from the precedings.[2]

The damaged cars meant that the Safety Car was required, which duly stayed out until the end of lap four.[2] Vettel duly aced the restart to ease clear of Massa, Webber fended off a lunge from Kubica, while Schumacher battled at the back of the field with the two Virgins.[2]

The order would steadily shift during the early stages, as Lewis Hamilton eased past teammate Button for sixth, while Massa's pace collapsed as the circuit began to dry.[2] That prompted Button to stop for slicks on lap seven, having debated with the McLaren team that it was the right call, although he would almost immediately slide off the circuit at turn three and rejoin.[2]

Yet, Button's pace would dramatically improve over the rest of the lap, prompting the rest of the field to flood into the pits over the following laps.[2] After the stops Vettel would retain the lead as Button leapt up to second, while Kubica had jumped Webber to claim third.[2]

The middle phase of the race would see Hamilton ease back up the field having lost out during the stops, moving up to challenge Kubica for third.[2] That, however, would soon become a fight for second, as Vettel's race came to a spectacular end, a brake failure sending him pirouetting out of the race at Ascari on lap 26.[2]

The second round of stops would further shake the order, although Button would retain a healthy lead over Kubica.[2] Hamilton was the big loser as he made numerous mistakes and slipped into a fight with Webber, while Massa and Alonso jumped up to third and fourth.[2]

The final laps would see Hamilton send a barrage of lunges at Alonso, only for the Spaniard to run him wide and allow Webber to get a run at the McLaren.[2] The Australian racer's lunge duly saw the two make contact and spit both into the gravel, although both managed to rejoin.[2]

Out front, meanwhile, Button would sweep across the line with a comfortable lead to claim victory, twelve seconds clear of Kubica.[2] Massa was next ahead of Alonso, while Nico Rosberg just fell shy of the #8 Ferrari at the line and hence had to settle for fifth.[2] Hamilton was next ahead of Vitantonio Liuzzi, with Rubens Barrichello, Webber and Michael Schumacher completing the scorers list.[2]

Fernando Alonso had claimed the early Championship lead with victory at the opening round, and established a seven point lead as a result of the new scoring system. Felipe Massa was his closest competitor in second, while Lewis Hamilton, Sebastian Vettel and Nico Rosberg completed the early top five. Five other drivers had also claimed opening day points, namely Michael Schumacher, Jenson Button, Mark Webber, Vitantonio Liuzzi and Rubens Barrichello.

In the Constructors Championship it had been a perfect start to the season for Ferrari, as their one-two left them with a maximum score of 43 after just one race. McLaren-Mercedes would start the season in second ahead of the factory Mercedes team, while Red Bull-Renault opened their account in fourth with sixteen points. The only other scorers at the season opener were Force India-Mercedes and Williams-Cosworth.

The full entry list for the 2010 Australian Grand Prix is shown below:

The full qualifying results for the 2010 Australian Grand Prix are outlined below:

The full results for the 2010 Australian Grand Prix are outlined below:

Fernando Alonso had retained the lead in the Championship after the second round in Australia, although his advantage at the head of the field had been cut almost in two. Indeed, Felipe Massa had moved to within four points of his teammate in second, while race winner Jenson Button had leapt into third, six off the early leader. Behind, Lewis Hamilton had slipped to fourth ahead of Nico Rosberg, while Robert Kubica had been the only driver to add their name to the scorers list in Melbourne.

In the Constructors Championship it was Ferrari who continued to lead the charge in the early stages, moving onto 70 points after two rounds. McLaren-Mercedes were still their closest combatants in second, sixteen off the lead, while Mercedes had retained third on 29. Behind, Renault were on the board for the first time in 2010 and moved into fourth, Red Bull-Renault had slipped to fifth, while Force India-Mercedes and Williams-Cosworth were the only other scorers.