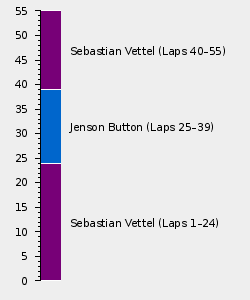 The 2010 Abu Dhabi Grand Prix, otherwise known as the II Etihad Airways Abu Dhabi Grand Prix (alternately known as the 2010 جائزة الاتحاد للطيران الكبرى في أبوظبي or the 2010 Jayizat Alaitihad Liltayaran Alkubraa fi 'abuzabi in Arabic), was the nineteenth and concluding round of the 2010 FIA Formula One World Championship, staged at the Yas Marina Circuit in Abu Dhabi, United Arab Emirates, on 14 November 2010.[1][2] The race would see Fernando Alonso, Mark Webber, Sebastian Vettel and Lewis Hamilton battle for the title, the first time that a quartet had fought for the crown at the season finale.[2]

Qualifying would see Vettel claim pole position, with Hamilton securing second just 0.031s behind the German racer.[2] Alonso was next up for Ferrari ahead of out-going Champion Jenson Button, while Webber would start from fifth ahead of Felipe Massa.[2]

Vettel aced his start to claim an early lead ahead of Hamilton, while Button took advantage of a slow starting Alonso to secure third.[2] Elsewhere, Michael Schumacher attacked teammate Nico Rosberg, resulting in him spinning, with the rest of the field scattering around the silver Mercedes.[2]

Unfortunately Vitantonio Liuzzi would be powerless to avoid the spinning Schumacher, with the resulting debris field triggering a Safety Car.[2] Six drivers, including Rosberg, would opt to make stops during the SC period, with the race restarting with the top five unchanged.[2]

The early laps would see the top five slowly pull clear in the early laps, with Webber notably struggling for pace.[2] The Australian racer duly became the first of the leaders to stop on lap eleven, rejoining sixteenth behind Rosberg and two other early stoppers.[2]

Alonso came in four laps later having brushed the barriers at turn nineteen, and would emerge ahead of the delayed Webber.[2] Those two duly battled through as they got caught behind Vitaly Petrov, who was able to keep both of the title pretenders behind him and destroy their races.[2]

Hamilton was the next of the leaders to come in on lap eighteen, rejoining well ahead of the Petrov rolling road block but still in traffic.[2] Vettel reacted by stopping a lap later and rejoined in second, with Button hitting the head of the field, and remaining out to try and aid Hamilton's title bid.[2]

Indeed, Hamilton had to win the race and see the other pretenders fall by the wayside if he was to take the crown, and duly charged through the field to fourth behind Kubica.[2] However, Vettel would not be troubled by Button before the #1 McLaren made its stop, surrendering the lead back to Vettel and dropped to fourth behind Hamilton and Robert Kubica.[2]

With that the fight for victory and the Championship was over, for Vettel had a secure lead over the now second placed Kubica, who had enough pace to keep the two McLarens at bay.[2] They eventually passed the Renault when Kubica stopped, while Petrov remained stubbornly ahead of Alonso and Webber through the closing stages.[2]

Hence, Vettel swept across the line to claim victory and the Championship, becoming the youngest ever World Champion at 23 years, 134 days.[2] Hamilton finished second ahead of teammate Button to complete the podium, with Rosberg a distant fourth.[2] Kubica and Petrov were next ahead of Alonso, who missed on the Championship by four points, and Webber, who finished third in the title hunt on ten points.[2] Jaime Alguersuari and Felipe Massa claimed the final points of the season in ninth and tenth.[2]

Fernando Alonso had retained his Championship lead heading into the season finale in Abu Dhabi, and would hold an eight point advantage. Mark Webber was the second man in the fight on 238 points, and would have to win with Alonso third or lower to take the title. Sebastian Vettel would arrive in Yas Marina in third, needing to outscore Alonso by sixteen to take the crown, while Lewis Hamilton would have to win and likely see none of the top three score if he was to claim his second World Championship.

In the Constructors Championship the fight was over, for Red Bull-Renault had moved 48 points clear with just 43 points left to fight for Abu Dhabi, handing them their maiden World Championship. McLaren-Mercedes hence had to console themselves with second, although they would have to fend of Ferrari at the finale. However, the Scuderia would have to outscore their Anglo-German rivals by 32 points in the finale to claim the runner-up spot, while Mercedes and Renault completed the top five.

The full entry list for the 2010 Abu Dhabi Grand Prix is shown below:

The full qualifying results for the 2010 Abu Dhabi Grand Prix are outlined below:

The full results for the 2010 Abu Dhabi Grand Prix are outlined below:

Sebastian Vettel was declared as the 2010 FIA Formula One World Championship Champion, having only moved to the top of the Championship as a result of the season finale. He won the Championship with a tally of 256 points and five race victories, leaving him four clear of Fernando Alonso in second who had also secured five wins. Mark Webber, meanwhile, had slipped to third on the final day on 242 points, two ahead of Lewis Hamilton, while Jenson Button bowed out as World Champion in fifth on 214 points.

In the Constructors Championship Red Bull-Renault had arrived in Abu Dhabi as the Champions, and would hence round out the campaign on 498 points. McLaren-Mercedes finished as runners-up with 454 points, while Ferrari were in third on 396 points. Mercedes were next up on 214 points, having bought Champions Brawn at the end of 2009, while none of the three new constructors had scored points in 2010.

Retrieved from "https://f1.fandom.com/wiki/2010_Abu_Dhabi_Grand_Prix?oldid=89262"
Community content is available under CC-BY-SA unless otherwise noted.