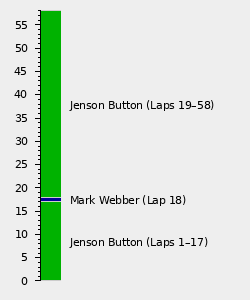 The 2009 Turkish Grand Prix, formally known as the V ING Türkiye Grand Prix'si, was the seventh round of the 2009 FIA Formula One World Championship, staged at the Istanbul Park Racing Circuit near Istanbul, Turkey, on 7 June 2009.[1][2] The race would see Jenson Button claim victory for the sixth time in seven races in 2009, matching the feat of Alberto Ascari, Juan Manuel Fangio, Jim Clark and Michael Schumacher, all of whom had gone on to win the World Championship.[2]

Button would have to work for his triumph however, having been beaten to pole position in qualifying by Sebastian Vettel of Red Bull-Renault.[2] Their teammates Rubens Barrichello and Mark Webber would share the second row, the Brazilian's Brawn-Mercedes ahead of the Red Bull-Renault, while Kimi Räikkönen was the best of the KERS powered car in sixth for Ferrari.[2]

The start of the race saw Vettel initially streak into the lead ahead of Button, while Barrichello had a clutch issue and tumbled back down the field.[2] Webber was hence gifted third as the Brazilian fell to thirteenth, with the rest of the field making it through the first corner without issue.[2]

However, there would be drama at turn nine, as Vettel slid wide and let Button sweep past for the lead, and ultimately decisive change of lead.[2] Webber, meanwhile, would have to fend off an attack from Jarno Trulli on the opening tour to solidify his hold on third, while Felipe Massa danced past teammate Räikkönen to claim fifth.[2]

The early stages saw Button escape the attentions of Vettel, with the lead group getting fairly spaced out as a result.[2] That meant that Nico Rosberg became the centre of attention, battling past Fernando Alonso and the Ferraris, while Barrichello spun when harassing Heikki Kovalainen.[2]

Barrichello's race went bad to worse when he broke his front wing battling with Adrian Sutil, dumping him to the very back of the field as he made an early stop for repairs.[2] Out front, meanwhile, Vettel would be the first of the leaders to stop on lap fifteen, with Button charging in two laps later.[2] Webber and Rosberg hit the head of the field but stopped on lap eighteen, with the order remaining unchanged once Trulli stopped.[2]

The second stint saw a divergence at the head of the field, for Vettel had gambled on a three-stop strategy and hence was lighter on fuel.[2] As a result the German youth was able to close onto the back of Button's #22 Brawn, although the Brit's defensive driving ensured that there was no way through for the #15 Red Bull.[2]

Vettel made his second stop on lap 29, rejoining in third behind teammate Webber, but was unable to close on the Australian racer as he had a heavier fuel load.[2] Furthermore, Button would make his second and final stop and rejoin without slipping behind the Australian, ending any hopes of him being challenged.[2]

Once the final stops played out Button was left with a commanding lead over Webber, while Vettel was a frustrated third, but would close up onto the back of his teammate.[2] Behind, Trulli was fending off a determined Rosberg in the closing stages, while Barrichello's race came to an end with a gearbox failure, the first non-finish for Brawn in 2009.[2]

With that the race was run, with Button cantering through the final laps to claim an ominous victory, and one which history suggested would make him Champion.[2] Behind, Webber kept Vettel at bay by just 0.7s in a late fight for second, while Trulli eased clear of Rosberg for fourth.[2] Massa, Robert Kubica and Timo Glock claimed the remaining points.[2]

Jenson Button once again extended his Championship lead with his fifth victory of the campaign, leaving Monte Carlo with 51 points to his name. Rubens Barrichello had again remained as his closest challenger, but slipped sixteen points behind, while Sebastian Vettel had fallen 28 points off in third. Mark Webber was next, 3.5 points behind his teammate, while Jarno Trulli had retained his top five status.

In the Constructors Championship Brawn-Mercedes had continued to build their early lead at the head of the field, and left Monaco with 86 points to their credit. Red Bull-Renault were still the British squad's main challengers, but faced a 43.5 point deficit after just six races. Toyota, meanwhile, had retained third, Ferrari moved up into fourth, while Force India-Mercedes were still the only pointless team.

The full entry list for the 2009 Turkish Grand Prix is outlined below:

The full qualifying results for the 2009 Turkish Grand Prix are outlined below:

The full results for the 2009 Turkish Grand Prix are outlined below:

A sixth win in seven races left Jenson Button in command of the Championship with a third of the season completed, his tally of 61 points just four short of a maximum score. Furthermore, his closest challenger Rubens Barrichello faced a 26 point deficit to the Brit, while Sebastian Vettel in third was some 32 points off the lead. Behind, Mark Webber had inched closer to the German youth in fourth ahead of Jarno Trulli, while Robert Kubica had become the season's sixteenth scorer.

Like their lead driver, Brawn-Mercedes had continued their steady march to the 2009 crown, leaving Turkey with 96 points to their credit. That translated to a 39.5 point lead over closest challengers Red Bull-Renault, who were themselves a secure 24 points clear of third placed Toyota. Ferrari had retained fourth ahead of McLaren-Mercedes, while Renault had slipped to seventh.