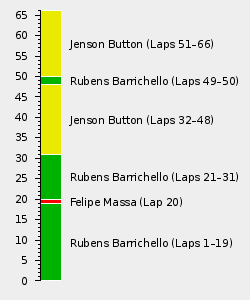 The 2009 Spanish Grand Prix, officially the LI Gran Premio de España Telefónica, was the fifth race of the 2009 FIA Formula One World Championship, which took place at the Circuit de Catalunya in Barcelona, Spain, on 10 May 2009.[1][2] The race would see Jenson Button beat Brawn-Mercedes teammate Rubens Barrichello to victory, in a race dictated by pit strategy.[2]

Qualifying would see Button beat Sebastian Vettel of Red Bull-Renault to pole position, while Barrichello secured third.[2] Felipe Massa was the best of the KERS equipped drivers in fourth for Ferrari, with Lewis Hamilton the next best KERS driver in fourteenth.[2]

The start of the race saw Barrichello streak up from third on the grid to claim the lead, with Button slotting in behind.[2] Massa would also get a strong start and jump Vettel using KERS, although the race was quickly brought under the Safety Car's jurisdiction due to an accident at the second corner.[2]

Four cars were involved, as Jarno Trulli spun while avoiding Nico Rosberg, and duly came back towards the middle of the circuit.[2] Adrian Sutil slammed into the Toyota and destroyed both cars, while the two Toro Rosso-Ferraris smashed into each other when trying to avoid that accident and were out as well.[2]

The restart came on lap five, with Barrichello storming clear with Button in his wake, while Massa misjudged his KERS harvesting and failed to challenge.[2] He would, however, manage to ease clear of a heavily fuelled Vettel, who would come under pressure from Fernando Alonso after the Spaniard jumped Mark Webber.[2]

The rest of the opening stint proved fairly tame, although when Barrichello stopped early on the race was effectively Button's to lose.[2] Indeed, the Brazilian's early stop signalled that he was on a three-stop plan as opposed to the majority's two, and duly dropped back behind Button, Massa and Vettel once they made their first stops.[2]

The second stint of the race was similarly quiet, with Button easing clear to establish a commanding lead, while Barrichello worked to get ahead of Massa and Vettel using his lighter fuel load.[2] The ploy worked and so the Brazilian would emerge from his third and final stop just ahead of the duo, while a long second stint for Webber saw the Australian racer jump into third.[2]

With that the fight for the podium was over, for Vettel would be denied the chance to challenge his teammate Webber due to the pace of a stubborn Massa.[2] Indeed, Massa lacked the pace of those around him due to a fuel miscalculation by Ferrari, although more severe warnings from the team ultimately saw the Brazilian surrender to both Vettel and Alonso in the final laps.[2]

Out front, meanwhile, Button cruised through the closing laps to claim his fourth win of the campaign, while second for Barrichello made it a second Brawn-Mercedes one-two in five races.[2] Webber was a lonely third ahead of Vettel and Alonso, while Massa just crawled to the finish line ahead of Nick Heidfeld and Nico Rosberg.[2]

A third victory of the campaign for Jenson Button had seen the Brit once again extend his Championship lead, and hence meant he ended the first fly-away races of the season with 31 points to his name. That translated into a twelve point lead over teammate Rubens Barrichello, while Sebastian Vettel had moved to within a point of the Brazilian in third. Jarno Trulli, meanwhile, had moved back into fourth ahead of his teammate Timo Glock, while Kimi Räikkönen had become the season's fourteenth scorer.

In the Constructors Championship Brawn-Mercedes had moved onto a half-century after Button's third win, and had seen their lead grow to 22.5 points after just four races. Red Bull-Renault had retained second ahead of Toyota, those two remaining a point apart, while McLaren-Mercedes had lost ground in fourth. Elsewhere, Renault completed the top five, while Ferrari were off the foot of the table having scored their first points of the campaign.

The full entry list for the 2009 Spanish Grand Prix is outlined below:

The full qualifying results for the 2009 Spanish Grand Prix are outlined below:

The full results for the 2009 Spanish Grand Prix are outlined below:

Jenson Button once again managed to extend his Championship lead after claiming his fourth win of the season, moving onto 41 points after five rounds. Behind, Rubens Barrichello had retained second and eased further ahead of Sebastian Vettel in third, while Mark Webber had moved into fourth ahead of Jarno Trulli and Timo Glock. Elsewhere, Felipe Massa had become the season's fifteenth scorer as he climbed up to twelfth, leaving five drivers without points in 2009.

In the Constructors Championship Brawn-Mercedes had moved even further clear at the head of the field, leaving the first Spanish race with 68 points to their name. Red Bull-Renault were their closest challengers in second, albeit 29.5 behind the early leaders. Toyota were next, on 26.5 points, while Ferrari had moved up to seventh after their poor start to the season.

Retrieved from "https://f1.fandom.com/wiki/2009_Spanish_Grand_Prix?oldid=89102"
Community content is available under CC-BY-SA unless otherwise noted.