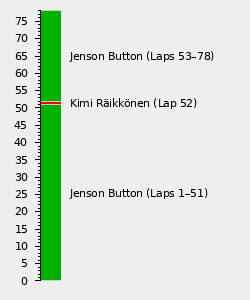 The LXVII Grand Prix Automobile de Monaco, otherwise known as the 2009 Monaco Grand Prix, was the sixth round of the 2009 FIA Formula One World Championship, staged at the Circuit de Monaco in Monte Carlo, Monaco, on 24 May 2009.[1][2] The race would see Jenson Button claim victory ahead of Brawn-Mercedes teammate Rubens Barrichello, marking the first time since 1957 that a single engine unit had won three Grand Prix in a row.[2]

A dramatic qualifying session had seen Monaco specialist Lewis Hamilton rash at Mirabeau during Q1, leaving him at the back of the field.[2] Out front, meanwhile, Button would claim pole position ahead of Kimi Räikkönen in the KERS equipped Ferrari, while Barrichello and Sebastian Vettel shared the second row.[2]

With KERS in his armoury giving him an acceleration advantage, it was expected that Räikkönen would sprint into the lead at the start, so it came as a surprise when Button leapt off the line to claim the lead ahead of teammate Barrichello.[2] Indeed, Räikkönen made a rather poor getaway but remained ahead of Vettel, with the German racer instead lunging across to block a dive inside by Felipe Massa into Sainte Devote.[2]

The early stages were fairly clean, with Button dragging Barrichello clear at the head of the field, while Räikkönen established himself in a lonely third.[2] Behind, Vettel was having fend off the combined attentions of Massa and Nico Rosberg, which ultimately ended with Massa sending a fruitless lunge at the German into the Nouvelle Chicane, which allowed Rosberg to sneak ahead of the #3 Ferrari.[2]

Vettel's pace collapsed after that point, with his super-soft tyres going off at an alarming rate and hence allowing the top three to escape.[2] After several laps stuck behind the #15 Red Bull-Renault Rosberg and Massa would both elbow their way though, prompting Vettel to abandon his tyres moments later.[2]

Shortly after his stop Vettel would drop out of the race completely, sliding into the barriers at Sainte Devote.[2] That followed the exit of Sébastien Buemi at the same corner, with the Swiss racer having taken Nelson Piquet, Jr. out with him, while Nick Heidfeld and Lewis Hamilton had collided to leave both of them with damage.[2]

Out front, meanwhile, Button would pit from the lead and rejoined behind Rosberg, the German racer having been the fastest man on track after taking Vettel.[2] Barrichello, meanwhile, would just remain ahead of Räikkönen after his pace collapsed during his first stint, before Rosberg abandoned the lead and got caught behind a heavily fuelled Fernando Alonso.[2]

With that Rosberg's challenge was over, for the German's race was ruined by the slower lapping Renault and prevented him from pushing with his fresh tyres.[2] He hence came under pressure from Heikki Kovalainen until the Finn smashed into the barriers at the Swimming Pool.[2]

The second round of stops passed without issue or change to the order, leaving Button with a commanding lead at the head of the field which he would hold through to the chequered flag.[2] Barrichello, meanwhile, eased clear of Räikkönen to claim second ahead of the #4 Ferrari, with Massa, Mark Webber, Rosberg, Alonso and Sébastien Bourdais claiming the rest of the points.[2]

Jenson Button once again managed to extend his Championship lead after claiming his fourth win of the season, moving onto 41 points after five rounds. Behind, Rubens Barrichello had retained second and eased further ahead of Sebastian Vettel in third, while Mark Webber had moved into fourth ahead of Jarno Trulli and Timo Glock. Elsewhere, Felipe Massa had become the season's fifteenth scorer as he climbed up to twelfth, leaving five drivers without points in 2009.

In the Constructors Championship Brawn-Mercedes had moved even further clear at the head of the field, leaving the first Spanish race with 68 points to their name. Red Bull-Renault were their closest challengers in second, albeit 29.5 behind the early leaders. Toyota were next, on 26.5 points, while Ferrari had moved up to seventh after their poor start to the season.

The full entry list for the 2009 Monaco Grand Prix is outlined below:

The full qualifying results for the 2009 Monaco Grand Prix are outlined below:

The full results for the 2009 Monaco Grand Prix are outlined below:

Jenson Button once again extended his Championship lead with his fifth victory of the campaign, leaving Monte Carlo with 51 points to his name. Rubens Barrichello had again remained as his closest challenger, but slipped sixteen points behind, while Sebastian Vettel had fallen 28 points off in third. Mark Webber was next, 3.5 points behind his teammate, while Jarno Trulli had retained his top five status.

In the Constructors Championship Brawn-Mercedes had continued to build their early lead at the head of the field, and left Monaco with 86 points to their credit. Red Bull-Renault were still the British squad's main challengers, but faced a 43.5 point deficit after just six races. Toyota, meanwhile, had retained third, Ferrari moved up into fourth, while Force India-Mercedes were still the only pointless team.