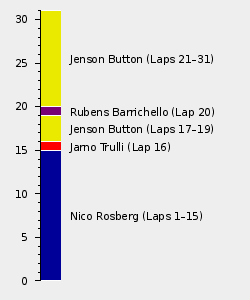 The 2009 Malaysian Grand Prix, formally known as the XI Petronas Malaysian Grand Prix, was the second race of the 2009 FIA Formula One World Championship, staged at the Sepang International Circuit in Sepang, Malaysia, on 5 April 2009.[1][2] The race would only be the fifth in history to see half-points awarded, as Jenson Button swept to victory amid a mid-race monsoon.[2]

Ahead of the race it was announced that Lewis Hamilton would be retroactively disqualified from the 2009 Australian Grand Prix, after being found to have misled the stewards.[3] The incident in question revolved around him overtaking and then allowing Jarno Trulli to move back ahead of him during the late-race Safety Car, with Trulli ultimately having his 25 second time penalty rescinded.[3]

Qualifying for the Malaysian Grand Prix would see Button sweep to pole position for Brawn-Mercedes, with Jarno Trulli claiming second for Toyota.[2] Sebastian Vettel claimed third but served a ten place grid penalty for causing a collision with Robert Kubica in Australia, while a gearbox penalty for Rubens Barrichello meant it was Timo Glock who would start from third.[2]

The start of the race would see Nico Rosberg stun the field, leaping from fourth to first as pole sitter Button went in the opposite direction.[2] Fernando Alonso would also make a barnstorming start, leaping into third from tenth with KERS, while Kubica slipped to the back of the field, the result of a soon-to-expire engine.[2]

The early stages would see Button ease his way back to the head of the field, first by passing Alonso and then Trulli, before leaping ahead of Rosberg during the first round of stops.[2] Around this time rain began to fall on the circuit, prompting an out-of-position Kimi Räikkönen to take full wets almost instantly, although the Finn's plan backfired and caused him to destroy his tyres.[2]

However, the Finn only jumped the gun by a handful of laps, for the rain began to increase on lap nineteen and caused the rest of the field to change for wets.[2] Yet, the rain did not result in much standing water, and when Glock charged up to third using intermediates on the greasy circuit, the field dived in almost as one for the same tyre.[2]

However, no sooner had the drivers changed then the conditions changed again, with the rain suddenly turning into a downpour and sending everyone back into the pits for full wets.[2] The last full green lap to be completed was lap 31, when Button made his stop from the lead and remained ahead of Nick Heidfeld and Glock, with the heavy rain and lack of light prompting the race to be red flagged on lap 33.[2]

The rain would continue to pound the circuit, and after almost an hour the race was officially declared with light fading fast.[2] The order was declared as the field had completed lap 31, with half points awarded due to the fact that the field had failed to complete 75% of the race distance.[2]

Button hence claimed victory ahead of Heidfeld, with the German racer becoming the first driver to score a podium finish with a KERS equipped car.[2] Glock completed the podium ahead of Trulli, while Barrichello, Mark Webber, Lewis Hamilton and Rosberg claimed the remaining points.[2]

Jenson Button left the season opening round of the 2009 season as the Championship leader, having scored ten points with his victory. Rubens Barrichello was next ahead of Jarno Trulli, while Timo Glock and Fernando Alonso completed the opening day top five.

In the Constructors Championship Brawn-Mercedes topped the table after the debut delight, a one-two leaving them on a maximum score of 18 points. Toyota were next having claimed third and fourth, while Renault, Williams-Toyota and Toro Rosso-Ferrari had also picked up opening day points.

The full entry list for the 2009 Malaysian Grand Prix is outlined below:

The full qualifying results for the 2009 Malaysian Grand Prix are outlined below:

The full results for the 2009 Malaysian Grand Prix are outlined below:

Jenson Button extended his Championship lead as a result of the Malaysian Grand Prix, leaving Sepang with fifteen points to his name and two race wins. Rubens Barrichello had likewise retained second on ten points, while Jarno Trulli was third and the first driver with half a point, leaving Malaysia on 8.5 points. Timo Glock was half a point behind in fourth, while Nick Heidfeld had moved into fifth.

In the Constructors Championship Brawn-Mercedes had retained their advantage at the head of the pack, leaving Malaysia on 25 points. Toyota had remained in second, 8.5 points behind, while BMW Sauber had leapt into third on four points. Elsewhere, McLaren-Mercedes were on the board with a single point, while Force India-Mercedes and Ferrari were the only constructors yet to score.

Retrieved from "https://f1.fandom.com/wiki/2009_Malaysian_Grand_Prix?oldid=89086"
Community content is available under CC-BY-SA unless otherwise noted.