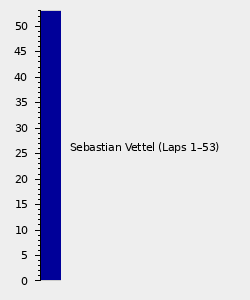 The 2009 Japanese Grand Prix, formally known as the XXXV Fuji Television Japanese Grand Prix (XXXV フジテレビ日本グランプリ in Japanese), was the fifteenth race of the 2009 FIA Formula One World Championship, held on 4 October 2009 at the Suzuka Circuit in Mie Prefecture, Japan.[1][2] The race would see Sebastian Vettel keep his title hopes alive as he claimed victory ahead of Jarno Trulli, as Championship leader Jenson Button finished eighth.[2]

Qualifying would be a turbulent affair, with four crashes during the three sessions seeing Timo Glock, Jaime Alguersuari, Sébastien Buemi and Heikki Kovalainen all disrupt the session.[2] Glock, however, would have the worst accident of all at the end of Q2, with his impact into the wall at the final corner causing him to sustain enough injuries that he would miss the race.[2]

Amid the chaos it was Vettel who emerged on pole position, beating Trulli with a late rally in Q3.[2] Lewis Hamilton was next before a slew of penalties jumbled the field, shuffling Nick Heidfeld up to fourth and Championship leader Button down to tenth.[2]

The start of the race would see Vettel pull into an immediate lead, although a KERS assisted Hamilton would ease alongside on the run to the first corner before ultimately giving way.[2] Otherwise, the reduced field would make it through the start without issue and largely in grid order, although Button would lose two positions while Sébastien Buemi dropped right to the back.[2]

The order soon stabilised, with no significant changes to the order until the first round of stops, which began just after Adrian Sutil and Kovalainen collided at the final chicane.[2] Regardless, the order would remain unchanged with Vettel leading Hamilton and Trulli, although a mistake from Hamilton exiting the pitlane allowed the #9 Toyota to sneak ahead.[2]

Hamilton's hopes of an immediate response were curtailed when his KERS unit partially failed, preventing him from using his full boost.[2] Furthermore, there would only be one on-track overtake before the second round of stops, with Kovalainen dragging past Giancarlo Fisichella on the start/finish straight.[2]

The second round of stops passed without major issue or incident, setting up a final, quiet, run to the flag.[2] However, with ten laps to go Alguersuari would spin into the barriers at the chicane and cause a Safety Car, causing the field to bunch back up.[2]

The field were released for a five lap sprint to the chequered flag, although there would be no denying Vettel, who stole a march on Trulli and re-established his lead.[2] It was status quo throughout the rest of the field, although Robert Kubica managed to seriously threaten Button's grip on eighth.[2]

With that the race was run, with Vettel easing clear to claim victory ahead of Trulli, while Hamilton fended off Kimi Räikkönen in the final laps to complete the podium.[2] Nico Rosberg, Nick Heidfeld, Rubens Barrichello and Button would complete the scorers, while Webber claimed fastest lap on his final lap by 0.002s, denying teammate Vettel a maiden Grand Chelem.[2]

The Championship picture had not changed too drastically as a result of the Singapore Grand Prix, with Jenson Button retaining a fair advantage of fifteen points. Rubens Barrichello was still his closest challenger, while Sebastian Vettel had remained in the hunt with three rounds to go, although he faced a huge deficit of 25 points. Mark Webber, meanwhile, was officially out of the fight in fourth on 51.5 points, while racer winner Lewis Hamilton had moved up to sixth.

In the Constructors Championship Brawn-Mercedes had inched closer to their maiden Championship at their first attempt, moving onto 153 points with three rounds to go. Red Bull-Renault had, however, retained a slight hope of challenging for the title on 110.5 points, but would have to outscore Brawn by seven points in Japan to remain in the hunt. Behind, Ferrari had just kept McLaren-Mercedes at bay to hold third, while Toyota had remained in fifth.

The full entry list for the 2009 Japanese Grand Prix is outlined below:

The full qualifying results for the 2009 Japanese Grand Prix are outlined below:

The full results for the 2009 Japanese Grand Prix are outlined below:

Victory for Sebastian Vettel kept the German youngster in the Championship hunt with two rounds to go, as he moved to within sixteen points of the lead. Jenson Button hence had retained the lead, and with teammate Rubens Barrichello fourteen behind the Brit was able to claim the crown in Brazil. Indeed, should Button outscore both Barrichello and Vettel then he would take the title, with a variety of other scenarios enough for him to do so.

Likewise, the Constructors Championship could be concluded on Brazilian soil, for Brawn-Mercedes had retained a 35.5 point lead with two rounds to go. Indeed, Red Bull-Renault had just remained in the hunt by half a point as a result of the Japanese Grand Prix, and would therefore have to claim a one-two in Brazil with Brawn failing to score at all just to stay in the fight. Behind, Ferrari and McLaren-Mercedes had held station in third and fourth, while Toyota completed the top five.