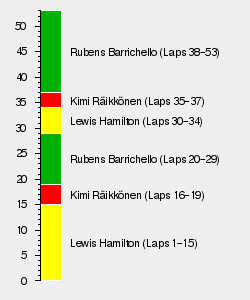 The 2009 Italian Grand Prix, officially known as the Formula 1 Gran Premio Santander d'Italia 2009, was race thirteen of the 2009 FIA Formula One World Championship, staged at the Autodromo Nazionale Monza in Monza, Italy, on 13 September 2009.[1][2] The race would see Rubens Barrichello secure his eleventh and final race victory, leading teammate Jenson Button to a Brawn-Mercedes one-two.[1]

There was a change to the entry list ahead of the Italian Grand Prix, as Ferrari poached Giancarlo Fisichella from Force India-Mercedes to replace Luca Badoer, who had failed to threaten the points in two races for the Scuderia.[3] That left a vacant spot at Force India, which was duly taken by their reserve driver Vitantonio Liuzzi, marking his first Grand Prix start since the 2007 Brazilian Grand Prix.[4]

Into the race weekend itself and Lewis Hamilton would emerge from qualifying with pole position, as Adrian Sutil narrowly missed out on making it two poles on the trot for Force India.[2] The German racer hence had to settle for second behind the Brit, while Kimi Räikkönen put his Ferrari onto the second row alongside Heikki Kovalainen.[2]

The start of the race was an all KERS affair, as Hamilton had to fend off a charge from Räikkönen into the Rettifilo chicane.[2] Hamilton duly won the duel on the brakes and emerged with the lead, as behind Sutil managed to keep Kovalainen at bay to claim third, aided by the fact that the Finn would be passed by both of the Brawns.[2]

The early stages saw the order quickly settle down, as Mark Webber became an early retirement after being spun at the Della Roggia.[2] Otherwise, the opening stages would be fairly tame, with Hamilton easing clear of Räikkönen, while Sutil kept the two heavily fuelled Brawns at bay, Barrichello ahead of Button.[2]

Indeed, the fight for victory would be one dictated by strategy, for the Brawns, and Kovalainen, had opted for a one-stop, while Hamilton, Räikkönen and Sutil were fighting on two stops.[2] The defending World Champion Hamilton duly became the first of the leaders to stop on lap fifteen, Sutil remained out until lap seventeen while Räikkönen remained out until lap eighteen.[2]

The two Brawns were hence left at the head of the field, and would continue to do so until the halfway point, when Button and then Barrichello stopped and rejoined in the same order.[2] They had, however, managed to rejoin in clear air, and would soon lap at a fastest rate than those ahead.[2]

That fact proved vital when Hamilton made his second and final stop, for both Brawns would flash past the pitexit as the McLaren rejoined.[2] Räikkönen and Sutil likewise slipped behind the two Brawns when they made their stops, although Hamilton would go on the offensive in the closing stages.[2]

Indeed, Hamilton threw everything he had at Button's Brawn in the final laps, with Barrichello remaining a tantalising couple of seconds ahead at the head of the field.[2] However, on the penultimate lap Hamilton crashed on the exit of Lesmo having run wide, and duly caused a Safety Car to be thrown on the final lap.[2]

That effectively brought the race to a premature end, although the gaps between the field were distorted as the Mercedes-Benz Safety Car never managed to pick up Barrichello.[2] Regardless, the Brazilian led teammate Button across the line to claim a one-two for Brawn ahead of Räikkönen, while Sutil was an impressive fourth for Force India.[2] Fernando Alonso was next having had KERS for the first time in fourth months in fifth, with Kovalainen, Nick Heidfeld and Vettel claiming the remaining points.[2]

Jenson Button had failed to score for the first time in 2009, although the Brit had still held a significant advantage at the head of the Championship. Indeed, his teammate Rubens Barrichello had only closed the gap between them to sixteen points, while Sebastian Vettel had moved to within nineteen points of the leader. Mark Webber, meanwhile, had slipped to fourth, Kimi Räikkönen was up to fifth, while Giancarlo Fisichella had claimed his first points since the 2007 Japanese Grand Prix.

Brawn-Mercedes had continued their steadying march to the 2009 Constructors Championship, moving onto 128 points courtesy of Barrichello's seventh place finish. That meant that Red Bull-Renault had only reduced their advantage to 23.5 points, and hence left the Anglo-German squad with more than a race's worth of points in hand. Behind, Ferrari had enhanced their hold on third ahead of McLaren-Mercedes, while Force India-Mercedes were off the foot of the table for the first time in their history, having moved into ninth after their maiden points finish.

The full entry list for the 2009 Italian Grand Prix is outlined below:

The full qualifying results for the 2009 Italian Grand Prix are outlined below:

The full results for the 2009 Italian Grand Prix are outlined below:

Victory for Rubens Barrichello left the Brazilian racer fourteen points off the lead in the Drivers Championship, and signalled his intent to challenge for the title. Indeed, second for Jenson Button in Italy had reduced the damage to his lead, moving him onto 80 points for the season. Behind Sebastian Vettel and Mark Webber were still in the hunt in third and fourth, while Kimi Räikkönen in fifth was mathematically out of contention, for he could not beat Button even if he won all four remaining races.

At the conclusion of the European phase of the season it was Brawn-Mercedes who were in command of the Constructors Championship, as their Italian one-two moved them onto 146 points. Red Bull-Renault were still in second, but had slipped 40.5 points behind with 76 points left to fight for in the final four rounds. Behind, Ferrari were officially out of the fight in third, but had a fair advantage of fifteen points over McLaren-Mercedes in fourth.