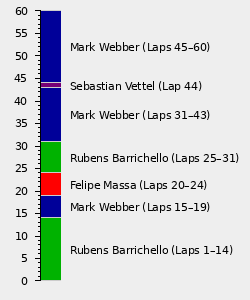 The 2009 German Grand Prix, formally known as the LXX Großer Preis Santander von Deutschland, was the ninth round of the 2009 FIA Formula One World Championship, staged at the Nürburgring in Nürburg, Germany, on 12 July 2009.[1][2] The race would see Mark Webber claim a crushing maiden victory, in the first German Grand Prix to officially be staged at the Nürburgring since 1985.[2]

The choice of the Nürburgring as the host of the German Grand Prix was the result of an agreement between the Eifel based circuit and the Hockenheimring, as both were struggling to fund the ever increasing cost of hosting Grand Prix.[3] The deal, meant that the two circuits alternated the hosting of the German Grand Prix, with 2009's meeting marking the first time that the "GP Strecke" had hosted the race as part of the deal.[3]

Into the race weekend itself and qualifying proved to be a battle between Red Bull-Renault and Brawn-Mercedes, with all four drivers fighting for pole position in Q3.[2] Ultimately it was Webber who emerged on pole ahead of Rubens Barrichello, while Championship leader Jenson Button slipped ahead of Sebastian Vettel for third.[2]

That fight carried over to the start of the race itself, with Barrichello managing to draw alongside Webber's Red Bull, as the Australian racer moved across to block the #23 Brawn.[2] A clash of wheels, which earned Webber a drive-through penalty, and Barrichello seized the lead, as behind Lewis Hamilton tried to get involved after a barnstorming start in his KERS equipped McLaren-Mercedes, but contact with Webber left him with a puncture.[2]

As Hamilton limped back to the pits for repairs another accident saw Jarno Trulli lose his front wing courtesy of a lunge from Kazuki Nakajima, as Barrichello established himself in the lead.[2] There would be no further incidents on the opening lap, meaning the order read as Barrichello leading from Webber, Heikki Kovalainen in third ahead of Felipe Massa after strong starts from both, while Button had remained ahead of Vettel.[2]

The early laps would see Barrichello and Webber ease clear of Kovalainen at the head of the field, while behind Button dealt with Massa to secure fourth.[2] Indeed, Webber looked to be the fastest driver in the field, but could not find a way past Barrichello until the Brazilian racer pitted on lap fifteen.[2]

With that Webber attempted to make a break, staying out an additional four laps before making his first stop, and with others making their stops would drop to second.[2] However, on the next lap the Australian racer would serve his drive-through penalty and drop to eighth, handing the lead to Massa before he too ventured in for a stop.[2]

Barrichello was hence left at the head of the field, while Webber climbed up the field with the rest of the lead group pitting, resulting in him shuffling back up to second.[2] This time, however, the Australian would have momentum on his side when he caught Barrichello, and duly scythed past the Brazilian veteran to reclaim the lead on lap 31.[2]

Once Webber passed him Barrichello would make his second stop, slipping down to fifth to leave Vettel in second, the German racer having jumped Kovalainen and Massa in the first pit phase.[2] Massa was next up in third ahead of Rosberg, while Button had dropped to sixth having already made his second stop.[2] Webber, meanwhile, would stay out ten laps longer than Barrichello before making his stop, rejoining in second behind Vettel before the German stopped a lap later.[2]

Once the final round of stops were completed the order read as Webber leading from Barrichello and Button, with Vettel, Massa and Rosberg completing the top six.[2] However, as the race entered its final phase the two Brawns began to struggle, and duly slipped to the back of the lead group to fifth and sixth, Button having slipped ahead of the Brazilian.[2]

Their demise left Webber on his own at the head of the field, with the Australian racer sweeping to his maiden F1 victory in his 130th race, a new record.[2] Vettel and Massa came through to completed the podium ahead of Rosberg, with Button and Barrichello being harried to the chequered flag by Fernando Alonso and Kovalainen.[2]

For the first time since the 2009 Malaysian Grand Prix Jenson Button's Championship lead had been reduced, although the Brit still had a healthy 23 point advantage leaving his home race. Rubens Barrichello had been one of the drivers to do the damage, remaining in second, while British Grand Prix winner Sebastian Vettel had closed to within two of the Brazilian. Mark Webber, meanwhile, had retained fourth and also inched towards the leader, while Jarno Trulli had held onto fifth.

In the Constructors Championship Brawn-Mercedes would leave their home race having smashed through the 100 point barrier, having claimed 105 points after eight races. Red Bull-Renault had managed to reduce their lead with their British one-two, although the Austro-Anglo-French combination was still 30.5 points behind. Toyota and Ferrari had held station in third and fourth, while Williams-Toyota had moved ahead of McLaren-Mercedes.

The full entry list for the 2009 German Grand Prix is outlined below:

The full qualifying results for the 2009 German Grand Prix are outlined below:

The full results for the 2009 German Grand Prix are outlined below:

Jenson Button had seen his Championship lead once again reduced as a result of the German Grand Prix, although the Brit still held a 21 point advantage at the head of the pack. Sebastian Vettel had done the damage, moving up into second on 47 points, while race winner Mark Webber had climbed to third with 45.5 points. Rubens Barrichello had been the big loser as he slipped to fourth, while Felipe Massa had climbed into the top five with 22 points.

In the Constructors Championship Brawn-Mercedes moved onto 112 points as they continued to lead the Championship hunt, although their advantage had taken a blow. Indeed, a second one-two for Red Bull-Renault in as many races had left the Austro-Anglo-French alliance 19.5 points behind the Anglo-German squad, with those two set to duel for the title during the second half of the season. Toyota, meanwhile, had retained third, albeit just 2.5 points ahead of Ferrari, while Williams-Toyota had enhanced their hold on fifth.