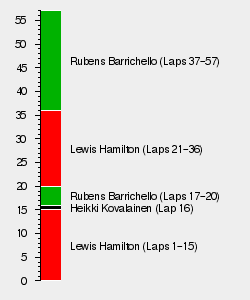 The 2009 European Grand Prix, formally the 2009 Formula 1 Telefónica Grand Prix of Europe, was the eleventh round of the 2009 FIA Formula One World Championship, staged at the Valencia Street Circuit in Valencia, Spain, on 23 August 2009.[1][2] The race would be won by Rubens Barrichello of Brawn-Mercedes, five years after his last race victory at the 2004 Chinese Grand Prix.[2]

Ahead of the race it was announced that Massa would be out of action for the rest of the season, but had survived major surgery to correct a skull fracture and was therefore out of intensive care.[3] His Ferrari seat was handed to their Italian test driver Luca Badoer, who would make his first F1 appearance since the 1999 Japanese Grand Prix.[3] Elsewhere, Renault had an initial ban for an unsafe release overturned, as they replaced Nelson Piquet, Jr. with GP2 Series front runner Romain Grosjean.[4][5]

Qualifying would result in a surprise result for McLaren-Mercedes, as they scored a surprise one-two with Lewis Hamilton on pole position ahead of Heikki Kovalainen.[2] Rubens Barrichello was next ahead of Sebastian Vettel, while Championship leader Jenson Button claimed fifth on the grid ahead of Kimi Räikkönen.[2]

The start of the race saw the two KERS equipped McLarens sprint into an early lead, Hamilton ahead of Kovalainen, while Barrichello went with them in third.[2] Räikkönen would likewise exploit his KERS assistance to secure fourth, Button tumbled to ninth after a poor launch, while Badoer leapt up from last to fourteenth with his KERS launch.[2]

That, however, would be as good as it got for Badoer, as he was tipped into a spin by the debuting Grosjean at turn one and fell to the back of the field once again.[2] Further around Sébastien Buemi and Timo Glock clashed and were both left with wounded equipment, while Button inadvertently cut the chicane defending eighth from Webber, and hence allowed the Australian through on the next straight.[2]

With that the on-track action was effectively over, with the field spacing out fairly quickly on the second lap as Hamilton led Kovalainen and Barrichello away from Räikkönen.[2] The order hence remained stable until Hamilton and Vettel disappeared into the pits on lap fifteen, with Hamilton dropping to sixth while Vettel had to stop on the following lap after the fuel rig had failed.[2]

Kovalainen would lead for a lap before pitting, releasing Barrichello whom had been stuck behind the #2 McLaren.[2] The Brazilian duly delivered a barrage of flying laps before making his stop on lap nineteen, and duly rejoined right on Hamilton's tail having made up over ten seconds during the four lap sprint.[2]

Hamilton would, however, manage to escape the immediate attentions of the #23 Brawn-Mercedes during the second stint, although he was not able to establish a significant lead.[2] This hence left him vulnerable to a mistake, which duly occurred during his second stop, as the McLaren pitcrew fumbled with his tyres resulting in a slow stop for the Brit.[2]

Three quick laps and a swift stop later and the damage was done, for Barrichello would shoot out of the pitlane clear of the #1 McLaren to secure the lead.[2] Their antics overshadowed Räikkönen's jump on Kovalainen for third, while Webber lost a lot of time in traffic and slipped behind Button and Robert Kubica outside of the points.[2]

With that the race was over, for there would be no on-track overtakes after the opening lap for only the third time in F1 history.[2] That meant that Barrichello claimed his first victory in almost five years ahead of Hamilton and Räikkönen, with Kovalainen, Nico Rosberg, Fernando Alonso, Button and Kubica claiming the remaining points.[2]

The rather confused order to the Hungarian Grand Prix meant that Jenson Button had once again retained a healthy advantage in the Championship hunt, leaving Hungary with 70 points to his credit. That translated to an 18.5 point lead over a now second placed Mark Webber, who had moved 4.5 points ahead of his teammate Sebastian Vettel. Behind, Rubens Barrichello had retained fourth ahead of Nico Rosberg, while race winner Lewis Hamilton had jumped to eighth.

In the Constructors Championship Brawn-Mercedes would head into the summer break with 114 points, meaning they still held an ever dwindling advantage atop the Championship. Red Bull-Renault had hence reduced the gap in Hungary, leaving the Eastern European circuit 15.5 points behind the Anglo-German alliance. Behind, Ferrari had eased into third ahead of Toyota, while McLaren-Mercedes had moved back into fifth ahead of Williams-Toyota.

The full entry list for the 2009 European Grand Prix is outlined below:

The full qualifying results for the 2009 European Grand Prix are outlined below:

The full results for the 2009 European Grand Prix are outlined below:

Jenson Button had maintained his grip on the 2009 World Championship after claiming two points in Valencia, moving him onto 72 points as the season entered its second phase. Behind, Rubens Barrichello had moved back into second and eighteen behind his teammate with victory in Valencia, while Mark Webber had slipped to third, 20.5 points off the lead. Sebastian Vettel had likewise lost ground in fourth but remained ahead of Nico Rosberg, while Lewis Hamilton moved up to sixth.

In the Constructors Championship Brawn-Mercedes had managed to extend their lead at the head of the field, moving onto 126 points for the season. Red Bull-Renault were still in second, but had slipped 27.5 points behind the leaders, their failure to score potentially pivotal to the Championship outcome. Behind, Ferrari had retained third ahead of McLaren-Mercedes, with the Anglo-German alliance having jumped ahead of Toyota to claim fourth.