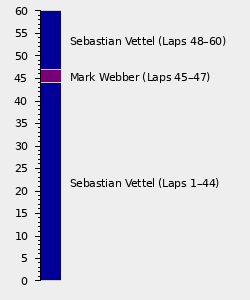 The 2009 British Grand Prix, formally known as the LXII Santander British Grand Prix, was the eighth round of the 2009 FIA Formula One World Championship, staged at the Silverstone Circuit in Northamptonshire, UK, on 21 June 2009.[1][2] The race would see Sebastian Vettel end Jenson Button's winning run, as he claimed victory ahead of Red Bull-Renault teammate Mark Webber.[2]

Indeed, Championship leader Button would be out of form throughout the weekend, only managing sixth on the grid in qualifying as Vettel stormed to pole position.[2] Button's teammate Rubens Barrichello would, however, get his Brawn-Mercedes into second alongside Vettel, with Webber, Jarno Trulli and Kazuki Nakajima all ahead of Button's #22 Brawn.[2]

The start of the race saw Vettel make a strong launch to claim the lead, although Barrichello almost managed to nose ahead through Copse.[2] Behind,, Webber kept a fast starting Nakajima at bay to secure third, while Button made a poor getaway and tumbled down to ninth.[2]

The early laps saw Button make a successful move on Felipe Massa for eighth, although he would get caught behind Trulli, who lacked the pace of those around him.[2] Elsewhere, Giancarlo Fisichella pulled out a superb double overtake on Nick Heidfeld and Fernando Alonso at Stowe, while Lewis Hamilton found himself fighting Robert Kubica at the back of the field.[2]

Out front, meanwhile, Vettel was putting in a stunning opening stint, escaping from Barrichello at almost a second a lap, with the Brazilian struggling to generate heat in his Bridgestone tyres.[2] Furthermore, the #23 Brawn was being harried by Webber's #14 Red Bull, although the Australian racer would not be able to force his way through, while Nakajima remained a podium challenger in fourth.[2]

Nakajima duly became the race's first scheduled pit caller on lap fifteen, a move which released a scrapping duo of Nico Rosberg and Kimi Räikkönen.[2] Räikkönen was next in ahead of Rosberg, with the latter jumping his Japanese teammate, while Trulli and Button's stops saw the Italian jump Räikkönen, while Button remained behind both.[2]

Out front, meanwhile, Vettel would pit without losing the lead, for both Barrichello and Webber stopped before him, with the latter emerging ahead.[2] With that Vettel eased his pace, allowing Webber to close the gap during the second stint and potentially mount a challenge.[2]

Yet, despite briefly leading during the second pit phase the Australian racer would not manage to bid for victory, for Vettel was able to match his pace during the final stint.[2] Elsewhere, Button finally managed to overcome both Trulli and Räikkönen to climb up to sixth, while Heikki Kovalainen and Sébastien Bourdais clashed at Vale and both retired.[2]

The closing stages would see Massa close onto the back of Barrichello for third, while Button went hunting after Rosberg, who was himself chasing Massa ahead.[2] Fuelled by the his home crowd the Brit would sweep onto the back of the duo, but as the race entered its final couple of laps he opted to hold station in sixth.[2]

With that the race was run, with Vettel cruising through ahead of teammate Webber to claim victory, as well as his maiden fastest lap.[2] Third went to Barrichello ahead of Massa, Rosberg and Button, while Trulli and Räikkönen claimed the final points positions after both being caught by Timo Glock and Fisichella.[2]

A sixth win in seven races left Jenson Button in command of the Championship with a third of the season completed, his tally of 61 points just four short of a maximum score. Furthermore, his closest challenger Rubens Barrichello faced a 26 point deficit to the Brit, while Sebastian Vettel in third was some 32 points off the lead. Behind, Mark Webber had inched closer to the German youth in fourth ahead of Jarno Trulli, while Robert Kubica had become the season's sixteenth scorer.

Like their lead driver, Brawn-Mercedes had continued their steady march to the 2009 crown, leaving Turkey with 96 points to their credit. That translated to a 39.5 point lead over closest challengers Red Bull-Renault, who were themselves a secure 24 points clear of third placed Toyota. Ferrari had retained fourth ahead of McLaren-Mercedes, while Renault had slipped to seventh.

The full entry list for the 2009 British Grand Prix is outlined below:

The full qualifying results for the 2009 British Grand Prix are outlined below:

The full results for the 2009 British Grand Prix are outlined below:

For the first time since the 2009 Malaysian Grand Prix Jenson Button's Championship lead had been reduced, although the Brit still had a healthy 23 point advantage leaving his home race. Rubens Barrichello had been one of the drivers to do the damage, remaining in second, while British Grand Prix winner Sebastian Vettel had closed to within two of the Brazilian. Mark Webber, meanwhile, had retained fourth and also inched towards the leader, while Jarno Trulli had held onto fifth.

In the Constructors Championship Brawn-Mercedes would leave their home race having smashed through the 100 point barrier, having claimed 105 points after eight races. Red Bull-Renault had managed to reduce their lead with their British one-two, although the Austro-Anglo-French combination was still 30.5 points behind. Toyota and Ferrari had held station in third and fourth, while Williams-Toyota had moved ahead of McLaren-Mercedes.