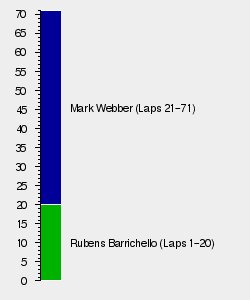 The 2009 Brazilian Grand Prix, officially known as the Formula 1 Grande Prêmio Petrobras do Brasil 2009 was the sixteenth round and penultimate round of the 2009 FIA Formula One World Championship, staged at the Autódromo José Carlos Pace in São Paulo, Brazil on 18 October.[1][2] The race would be won by Mark Webber for Red Bull-Renault, as Jenson Button attempted to secure the 2009 World Championship with a round to spare.[2]

Arriving in Brazil, Button held a fourteen point lead at the head of the Championship hunt, with only teammate Rubens Barrichello and Sebastian Vettel of Red Bull able to deny him the crown.[2] Likewise, Button and Barrichello were set to claim the Constructors Championship for Brawn-Mercedes, with the rookie squad needing to score just two points in the final two rounds to take the title.[2]

Qualifying would see Barrichello sweep to pole position in front of his home fans, while Webber secured second ahead of Adrian Sutil.[2] That put the Brazilian at a huge advantage in the title hunt, for Button would qualify a lowly fourteenth, while Vettel would start from fifteenth.[2]

The start of the race saw the leaders make a clean start, with Barrichello easing ahead of Webber, as behind Vettel's title ambitions appeared to have taken a blow as he was whacked by Heikki Kovalainen at the Senna S.[2] Miraculously, however, the German racer escaped without damage, while Kovalainen scrambled back on forced Giancarlo Fisichella off track.[2]

Further around the lap Sutil and Jarno Trulli tripped over each other on the run out of turn four, resulting in the pair skating off the track before shooting back across the circuit at turn six.[2] Sutil's Force India-Mercedes duly slammed into Fernando Alonso, who had no way of avoiding the errant car, with the three ruined cars triggering an immediate Safety Car.[2]

With the safety car on track Kovalainen and a wounded Kimi Räikkönen, who had broken his front wing, dived into the pits, as the field settled in behind the SC.[2] The order had been heavily altered by the incidents throughout the field, with Barrichello still leading Webber, Nico Rosberg moving up to third, while Button had leapt into ninth.[2]

The race resumed a few laps later, with Button getting a run on Romain Grosjean and Kazuki Nakajima to move into seventh before the end of the restart lap.[2] However, Button's charge up the field would be halted by a very defensive Kamui Kobayashi, who would earn the Champion-in-waiting's ire as he weaved in front of the #22 Brawn.[2]

The order settled once Button had finally dealt with Kobayashi, as out front Barrichello failed to break away from Webber.[2] As a result, the Australian racer was able to jump the Brazilian at the first round of stops, meaning Button only had to finish in fifth to claim the crown.[2]

The second stint saw Button run in fourth as Rosberg and Nick Heidfeld faltered, although he was being hounded by a quartet of drivers including Lewis Hamilton and Vettel.[2] They duly leapfrogged the #22 Brawn at the second round of stops to leave Button in sixth, although his title hopes would grow through the final stint.[2]

Indeed, Barrichello's pace would only deteriorate during the final phase of the race, resulting in him slipping behind Robert Kubica, before contact with Hamilton caused him to suffer a puncture.[2] That left the Brazilian down in eighth when he pitted and rejoined, while Vettel moved up into fourth, a position ahead of Webber.[2]

With that the race and the title hunt was over, for Webber would claim victory at a cruise ahead of Kubica, while Hamilton kept Vettel at bay to complete the podium.[2] Button, meanwhile, was able to relax in the closing stages before claiming fifth and the World Championship title, with that result also enough to earn Brawn the Constructors Championship.[2]

Victory for Sebastian Vettel kept the German youngster in the Championship hunt with two rounds to go, as he moved to within sixteen points of the lead. Jenson Button hence had retained the lead, and with teammate Rubens Barrichello fourteen behind the Brit was able to claim the crown in Brazil. Indeed, should Button outscore both Barrichello and Vettel then he would take the title, with a variety of other scenarios enough for him to do so.

Likewise, the Constructors Championship could be concluded on Brazilian soil, for Brawn-Mercedes had retained a 35.5 point lead with two rounds to go. Indeed, Red Bull-Renault had just remained in the hunt by half a point as a result of the Japanese Grand Prix, and would therefore have to claim a one-two in Brazil with Brawn failing to score at all just to stay in the fight. Behind, Ferrari and McLaren-Mercedes had held station in third and fourth, while Toyota completed the top five.

The full entry list for the 2009 Brazilian Grand Prix is outlined below:

The full qualifying results for the 2009 Brazilian Grand Prix are outlined below:

The full results for the 2009 Brazilian Grand Prix are outlined below:

Jenson Button was declared as the 2009 FIA Formula One World Championship Champion, having moved fifteen point clear with a race to spare. That hence meant that Sebastian Vettel and Rubens Barrichello would duel for the runner-up spot at the season finale in Abu Dhabi, with the German racer holding a two point advantage in that fight. Elsewhere, Mark Webber was set to finish the season in fourth, while Lewis Hamilton and Kimi Räikkönen would duel for fifth at the finale.

Likewise, the fight for the Constructors Championship was over with a race to go, for Brawn-Mercedes had moved onto an unassailable tally of 161 points in their debut season. That meant that Red Bull-Renault would have to console themselves with second, leaving the only major fight to be fought at the season finale as a duel for third. That would be disputed between McLaren-Mercedes and Ferrari, with just a point separating them with a race to go.