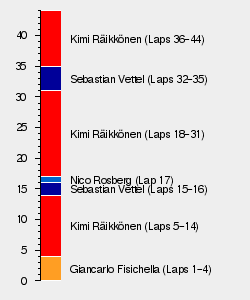 The 2009 Belgian Grand Prix, formally known as the 2009 Formula 1 ING Belgian Grand Prix, was the twelfth race of the 2009 FIA Formula One World Championship, staged at the Circuit de Spa-Francorchamps in Spa, Belgium, on 30 August 2009.[1][2] The race would see Kimi Räikkönen claim victory, although it was the combined efforts of Giancarlo Fisichella and Force India-Mercedes that ultimately stole the show.[2]

Indeed, the Italian racer had claimed a shock pole position for the British based, Indian squad in qualifying, while Jarno Trulli claimed second for Toyota.[2] Nick Heidfeld was next for BMW Sauber ahead of Rubens Barrichello, while Championship leader Jenson Button claimed a lowly fourteenth on the grid.[2]

Fisichella duly aced his start to claim the lead into La Source, while Räikkönen stormed into second with the aid of KERS on his Ferrari.[2] Barrichello, meanwhile, made a miserable start and almost stalled, resulting in him tumbling to the back of the field as he crawled off the grid.[2]

Fortunately no one would manage to hit the #23 Brawn-Mercedes, with the first incident of the day instead coming at Les Combes further around the opening tour.[2] There, Romain Grosjean would make a mistake on the brakes and smash into the back of Button's Brawn, resulting in the Brit spinning 180° and then hitting the front of the Frenchman's Renault.[2] The rest of the field scattered around them, and in the resulting chaos Lewis Hamilton and Jaime Alguersuari collided and came to rest alongside the Brawn and Renault.[2]

With four cars littered at Les Combes there was no choice but to throw the Safety Car, destroying Fisichella's small advantage over Räikkönen at the head of the field.[2] Indeed, the five lap SC period would prove crucial to the outcome of the race, for not only did it put Räikkönen right on the Italian's tail, but also allowed him to charge up his KERS boost for the restart.[2]

The restart came at the start of lap six, and although Fisichella would fend off the #4 Ferrari into La Source, he would have no response to the KERS assisted car up through Eau Rouge.[2] Indeed, Räikkönen would breeze past the #21 Force India with ease along the Kemmel Straight, and had enough of a margin over Fisichella that he had no need to defend his newly attained lead into Les Combes.[2]

With that Räikkönen was away, establishing a fair lead over the Force India that remained through to the first round of stops.[2] Indeed, while Fisichella was able to keep the Ferrari in sight, he could not challenge Räikkönen for the lead on-track, with the KERS boost allowing the Finn to ease clear whenever the Italian lined up a move.[2]

The first round of stops saw little change to the order out front, although Red Bull dropped the ball and released Mark Webber into the path of Heidfeld, earning the Australian a drive-through penalty.[2] That allowed Vettel to move into third ahead of the two BMW Saubers, while Barrichello was making a strong recovery, moving into the top ten as he tried to get back into the points.[2]

Yet, there would be no changes to the order at the head of the field for the rest of the race, with Räikkönen maintaining his small lead over Fisichella through the second stops and to the chequered flag.[2] The Italian racer would later remark that it was only the effect of KERS that kept him from taking victory, marking the first time that KERS had been cited as a major contributor in a race win.[2]

Behind them, Vettel claimed fastest lap en-route to third, while Robert Kubica led teammate Heidfeld across the line for fourth and fifth. Heikki Kovalainen was next ahead of Barrichello, whose car caught fire in Parc Fermé, while Nico Rosberg secured the final point in eighth ahead of Webber.

Jenson Button had maintained his grip on the 2009 World Championship after claiming two points in Valencia, moving him onto 72 points as the season entered its second phase. Behind, Rubens Barrichello had moved back into second and eighteen behind his teammate with victory in Valencia, while Mark Webber had slipped to third, 20.5 points off the lead. Sebastian Vettel had likewise lost ground in fourth but remained ahead of Nico Rosberg, while Lewis Hamilton moved up to sixth.

In the Constructors Championship Brawn-Mercedes had managed to extend their lead at the head of the field, moving onto 126 points for the season. Red Bull-Renault were still in second, but had slipped 27.5 points behind the leaders, their failure to score potentially pivotal to the Championship outcome. Behind, Ferrari had retained third ahead of McLaren-Mercedes, with the Anglo-German alliance having jumped ahead of Toyota to claim fourth.

The full entry list for the 2009 Belgian Grand Prix is outlined below:

The first practice session was affected by rain, meaning only one driver set a time below 1:50.000. The second session had a dry track, which meant all drivers set representative times. This was noted with the top 18 seconds being separated by just 1 second. Toyota and Renault finished all three practices strongly.

Q1 saw Luca Badoer stick his Ferrari at the back of the grid for the second consecutive race, with Romain Grosjean one place above. Badoer crashed with the chequered flag shown bringing out yellow flags, meaning drivers had to slow on their final flying lap.

The second qualifying session caused shock, as both McLarens failed to make it into Q3, along with championship leader Jenson Button and the Renault of Fernando Alonso. The quick Force India of Sutil also failed to make it through, lining up on the grid in 11th.

Red Bull, BMW Sauber and Toyota were the only teams to get both of their drivers into Q3, however it was the rapid Fisichella who took a surprise pole position, ahead of Trulli and Heidfeld. The top nine were separated by less than 5 tenths of a second.

The full qualifying results for the 2009 Belgian Grand Prix are outlined below:

As the lights went out, Barrichello stalled on the grid which meant many cars had to take sudden avoiding action. Fisichella got off cleanly however Räikkönen's good start was undone by him running wide into the first corner. Everybody got round the first corner without major contact, however four cars crashed out halfway into the lap. Romain Grosjean attempted an ambitious manoeuvre on Button, spinning the Brawn and taking them both out. In avoiding the contact, Hamilton was rear-ended by Alguersuari. Lewis may have been able to continue, however the Toro Rosso was a passenger and t-boned the McLaren into the barriers.

The safety car was out for four laps, and as soon as it was out, Räikkönen was able to easily pass Fisichella for the lead, the Force India being unable to defend the KERS-assisted Ferrari.

Other front row starter Jarno Trulli retired on lap 21, although the Toyota driver was at the back of the pack, having been forced to pit on the first lap. Fernando Alonso was the only other retirement. Luca Badoer finished last of the finishers, almost fifty seconds off the next car ahead.

Fisichella, despite being KERS-less, was able to keep Räikkönen honest, finishing less than one second behind. Many have claimed that the Italian would have won the race had both cars either had KERS or not had KERS. Sebastian Vettel completed the podium. Despite not finishing, Jenson Button retained his championship lead due to nearest challenger Barrichello's 7th place finish.

The full results for the 2009 Belgian Grand Prix are outlined below:

Jenson Button had failed to score for the first time in 2009, although the Brit had still held a significant advantage at the head of the Championship. Indeed, his teammate Rubens Barrichello had only closed the gap between them to sixteen points, while Sebastian Vettel had moved to within nineteen points of the leader. Mark Webber, meanwhile, had slipped to fourth, Kimi Räikkönen was up to fifth, while Giancarlo Fisichella had claimed his first points since the 2007 Japanese Grand Prix.

Brawn-Mercedes had continued their steadying march to the 2009 Constructors Championship, moving onto 128 points courtesy of Barrichello's seventh place finish. That meant that Red Bull-Renault had only reduced their advantage to 23.5 points, and hence left the Anglo-German squad with more than a race's worth of points in hand. Behind, Ferrari had enhanced their hold on third ahead of McLaren-Mercedes, while Force India-Mercedes were off the foot of the table for the first time in their history, having moved into ninth after their maiden points finish.