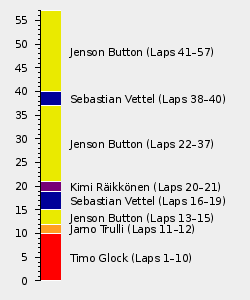 The 2009 Bahrain Grand Prix (officially VI Gulf Air Bahrain Grand Prix) was race number 4 of the 2009 Formula One Season. It took place at the Bahrain International Circuit on April 26 2009. The race was won by Brawn-Mercedes driver Jenson Button with Sebastian Vettel for Red Bull-Renault in second and Jarno Trulli of Toyota in third.

Going into the Bahrain round, Jenson Button driving in a Brawn GP car was leading the Driver's Championship by 6 points from his Brazilian team-mate Rubens Barrichello while Sebastian Vettel and Timo Glock was a further 5 points behind the Brazilian driver. In the Constructor standings Brawn-Mercedes had a 16 and a half points point ahead of the Red Bull-Renault. Toyota was the other team that was in double figures after 3 rounds. VJM02 had a revised floor and diffuser that was introduced at Bahrain. They also had a upgraded front wing and reprofiled side-pods.

The full entry list for the 2009 Bahrain Grand Prix is shown below:

* Adrian Sutil was issued a 3 place grid-penalty for impeding Mark Webber during qualifying.

Retrieved from "https://f1.fandom.com/wiki/2009_Bahrain_Grand_Prix?oldid=67946"
Community content is available under CC-BY-SA unless otherwise noted.