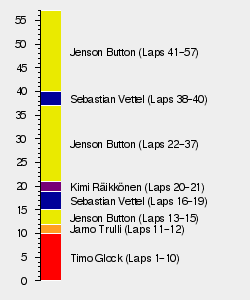 The 2009 Bahrain Grand Prix, officially the VI Gulf Air Bahrain Grand Prix, was the fourth race of the 2009 FIA Formula One World Championship, which took place at the Bahrain International Circuit in Sakhir, Bahrain, on 26 April 2009.[1][2] The race would see Jenson Button sweep to a third victory of the campaign for Brawn-Mercedes, as Nick Heidfeld matched the record for most consecutive race finishes.[2]

Qualifying had seen Toyota secure their first ever front-row lockout, with Jarno Trulli claiming pole position ahead of teammate Timo Glock.[2] Sebastian Vettel was next ahead of Button, while Lewis Hamilton was the best placed of the KERS equipped cars in fifth.[2]

The start of the race would see Glock sprint into an early lead ahead of Trulli, while Hamilton swept up from fifth to third to challenge the Italian into the first corner.[2] Trulli ultimately fended off the Brit through the sweeping corner, as behind Button eased ahead of a heavily fuelled Vettel for fourth, and Kimi Räikkönen would elbow his way up to sixth in the #4 Ferrari.[2]

There was drama at the back of the field, as Felipe Massa, Heidfeld, Robert Kubica and Kazuki Nakajima tangled, leaving all four with front wing damage.[2] They all limped back to the pits for repairs, although Massa was complaining of a KERS issue as, at the head of the field, Glock did his best to escape with Trulli acting as a rear gunner.[2]

Button made an early move stick on Hamilton to secure third, although the Brawn would find no way past Trulli, although both Toyotas were on light fuel loads and duly pitted early.[2] Hamilton, meanwhile, would keep Vettel at bay through to making his first stop on lap fifteen, with the German youth duly taking over the lead as Button too ventured into the pits.[2]

Vettel's stop came three laps later on lap eighteen, with a quick turn-around getting him ahead of Hamilton, but caught behind Trulli who was already struggling on his second set of tyres.[2] Glock, meanwhile, had suffered a miserable in-lap on his tyres and so had slipped to the back of the lead group, leaving Button at the head of the field.[2]

With that Button was away, establishing a significant lead over fifteen seconds by lap 34, which would only grow prior to the Brit making his second stop.[2] Indeed, the second round of stops would once again cost Toyota, with Trulli slipping behind Vettel, while Glock dropped out of contention and behind Räikkönen's Ferrari.[2]

The closing stages saw Vettel halve Button's lead at the head of the field, although the Brit had more than enough in hand to cruise through to the chequered flag and claim victory ahead of the German youth.[2] Behind, Trulli's pace picked up to leave him trailing the Red Bull by a couple of seconds as he scored third, while Hamilton, Rubens Barrichello, Räikkönen, Glock and Fernando Alonso claimed the remaining points.[2] Heidfeld, meanwhile, would match Michael Schumacher's record of 24 consecutive race finishes, although the German racer was the last classified finisher in nineteenth.[2]

Jenson Button retained his lead in the Championship after the third round of the season, leaving China with a six point advantage. Rubens Barrichello had likewise retained second, moving onto fifteen points, while Sebastian Vettel had rocketed up to third with his victory. Timo Glock had remained in fourth ahead of Mark Webber, with thirteen drivers on the board after three races.

In the Constructors Championship Brawn-Mercedes remained at the head of the field, and had ensured that they had a fair advantage of sixteen and a half point. Red Bull-Renault, meanwhile, had been the big winners in China as they shot into second on 19.5 points, with Toyota one of a handful of teams to make way for the Austro-Anglo-French combination. McLaren-Mercedes had also moved up the field into fourth, while Ferrari and Force India-Mercedes had once again failed to score.

The full entry list for the 2009 Bahrain Grand Prix is outlined below:

The full qualifying results for the 2009 Bahrain Grand Prix are outlined below:

* Sutil was issued a 3 place grid-penalty for impeding Webber during Q1.[4]

The full results for the 2009 Bahrain Grand Prix are outlined below:

A third victory of the campaign for Jenson Button had seen the Brit once again extend his Championship lead, and hence meant he ended the first fly-away races of the season with 31 points to his name. That translated into a twelve point lead over teammate Rubens Barrichello, while Sebastian Vettel had moved to within a point of the Brazilian in third. Jarno Trulli, meanwhile, had moved back into fourth ahead of his teammate Timo Glock, while Kimi Räikkönen had become the season's fourteenth scorer.

In the Constructors Championship Brawn-Mercedes had moved onto a half-century after Button's third win, and had seen their lead grow to 22.5 points after just four races. Red Bull-Renault had retained second ahead of Toyota, those two remaining a point apart, while McLaren-Mercedes had lost ground in fourth. Elsewhere, Renault completed the top five, while Ferrari were off the foot of the table having scored their first points of the campaign.