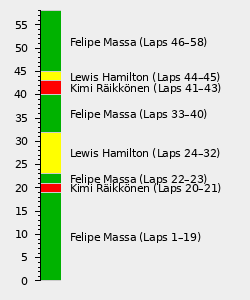 The IV Petrol Ofisi Türkiye Grand Prix'si, otherwise known as the 2008 Turkish Grand Prix, was the fifth round of the 2008 FIA Formula One World Championship, staged at the Istanbul Park Racing Circuit near Istanbul, Turkey, on 11 May 2008.[1][2] The race would see Felipe Massa secure his third straight pole and victory at the Turkish Grand Prix, as Rubens Barrichello broke the record for most Grand Prix starts.[2]

Ahead of the race news emerged that Super Aguri had entered administration, the result of a major backer withdrawing funding.[3] An attempt by Dubai International Capital, trading under the name "Magma Group" had been made to take over the Aguri team, although that was ultimately rejected by senior staff over concerns over how the payment would be implemented.[3]

Qualifying for the Turkish Grand Prix hence saw a tweak to the knockout stages, with only five cars being removed in both Q1 and Q2, to leave ten drivers in Q3.[2] Regardless, it was Istanbul specialist Massa who emerged on pole position for Ferrari, sharing the front row with Heikki Kovalainen.[2]

The start of the race saw Massa sprint into an early lead, leaving Kovalainen to be beaten into turn one by his teammate Lewis Hamilton.[2] Kimi Räikkönen tried to follow the Brit past the #23 McLaren-Mercedes but was squeezed by his compatriot, resulting in the front wing the Ferrari shredding Kovalainen's left rear tyre.[2]

Kovalainen quickly dropped to the back of the field, as behind Giancarlo Fisichella crashed out spectacularly, the Force India-Ferrari flying over the back of Kazuki Nakajima's Williams-Toyota.[2] Their collision preceded that of Sebastian Vettel and Adrian Sutil, with the sheer amount of debris and Fisichella's ruined Force India meaning that the Safety Car was called upon to clear the circuit.[2]

The restart came on lap three, with Massa sprinting clear of Hamitlon, while Räikkönen attacked Fernando Alonso for fourth, having slipped behind the Spaniard and Robert Kubica.[2] The Finn duly secured fourth and went sprinting off after Kubica, with the top four soon breaking clear of Alonso's Renault.[2]

The first round of stops were begun by Alonso on lap fifteen, with Hamilton the next to stop a lap later, having exchanged fastest laps with Massa.[2] The Brazilian pitted on lap nineteen along with Kubica and rejoined ahead of the Brit, allowing Räikkönen to lead for a lap before making his stop.[2]

That stop left Räikkönen ahead of Kubica, while Nick Heidfeld managed to jump Alonso to secure fifth.[2] Out front, meanwhile, Hamilton had short-fuelled to gamble on a three-stop strategy, and duly passed Massa on lap 24 with a lunge at turn twelve.[2]

The Brit continued to stretch his lead during his third stint, opening it out to just above fourteen seconds before pitting on lap 45.[2] He rejoined in between the two Ferraris, and duly set about demolishing Massa's lead, although the Brazilian was able to maintain a similar pace to the McLaren.[2]

Although Hamilton continued to eek into Massa's advantage the race victory was never in doubt, with Massa remaining three seconds clear of Hamilton to claim his third win in a row in Turkey.[2] Räikkönen completed the podium having closed in on Hamilton in the closing stages, while Kubica and Heidfeld picked up solid points for BMW Sauber.[2] Alonso, Mark Webber and Nico Rosberg secured the remaining points.[2]

Kimi Räikkönen used his second victory of the campaign to establish a nine point lead atop the Championship hunt in Spain, leaving Barcelona with 29 points to his name. Lewis Hamilton had moved back up into second to sit as the Finn's closest challenger, while Robert Kubica was just a point further back in third. Another point separated the Polish racer from Felipe Massa, while Nick Heidfeld completed the early season top five on sixteen.

In the Constructors Championship Ferrari had moved to the head of the pack with a second one-two in a row in Spain, and left the Circuit de Barcelona-Catalunya with 47 points. That translated to a twelve point lead over former leaders BMW Sauber, who left Spain just a point ahead of McLaren-Mercedes in third. Williams-Toyota were next ahead of Toyota, while Honda had their first points of the campaign, leaving Force India-Ferrari and the outgoing Super Aguri-Honda squads as the only pointless teams.

The full entry list for the 2008 Turkish Grand Prix is outlined below:

The full qualifying results for the 2008 Turkish Grand Prix are outlined below:

The full results for the 2008 Turkish Grand Prix are outlined below:

Kimi Räikkönen continued to lead the Championship hunt leaving the Turkish Grand Prix, although his advantage had been reduced by those chasing his 35 point tally. Indeed, race winner Felipe Massa had closed to within seven points of his teammate, and moved ahead of Lewis Hamilton, who matched the Brazilian's 28 point haul, but was behind courtesy of one win to Massa's two. Behind, Robert Kubica had slipped four points behind those two in fourth, while Nick Heidfeld had maintained his top five status.

In the Constructors Championship Ferrari had managed to extend their lead at the head of the hunt, having moved onto 63 points courtesy of another double-podium in Turkey. BMW Sauber had likewise secured a good points haul in Istanbul even if they had lost ground to Ferrari, and hence had remained two points ahead of McLaren-Mercedes. Behind, Williams-Toyota and Red Bull-Renault were both embarrassing their engine suppliers as they completed the top five, while the withdrawal of Super Aguri-Honda had left Force India-Ferrari as the only pointless team.