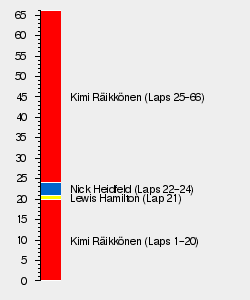 The 2008 Spanish Grand Prix, officially the L Gran Premio de España Telefónica was the fourth round of the 2008 FIA Formula One World Championship, staged at the Circuit de Catalunya in Barcelona, Spain, on 27 April 2008.[1][2] The race would see Kimi Räikkönen secure victory ahead of teammate Felipe Massa, in what proved to be the final race for fan favourites Super Aguri-Honda.[2]

The race weekend with an air of controversy surrounding it, with the FIA having placed the race under probation due to racist taunts having been heard during pre-season testing at the circuit.[2] This led to an increased presence of stewards among the crowd, although there would ultimately be no reports of racism during the weekend.[2]

Qualifying had seen Fernando Alonso give home fans hope of a home victory, although the Spanish ace was ultimately beaten to pole position by Championship leader Räikkönen.[2] Alonso therefore had to settle for second ahead of Massa and Robert Kubica, while Lewis Hamilton would share the third row with his teammate Heikki Kovalainen.[2]

The start saw Räikkönen ease clear of Alonso to secure the lead, while Massa sliced past the Renault to secure second through the first corner.[2] Behind, Hamilton dived past Kubica to claim fourth behind the Spaniard, as behind Adrian Sutil got caught out on the brakes trying to pass David Coulthard, and duly spun into Sebastian Vettel.[2]

Sutil and Vettel were out on the spot, with the amount of debris requiring the Safety Car to be called out.[2] After three laps the race was resumed with Räikkönen getting the jump on Massa to secure an early lead, while the Brazilian escaped the attentions of Alonso before the end of the restart lap.[2]

Indeed, the two Ferraris were on their own after than, with Räikkönen setting a searing pace out front, while Massa was able to ease clear of Alonso without too much drama.[2] Alonso hence came under pressure from Hamilton, although he would resist the attentions of his former teammate through to the first round of stops.[2]

Alonso was the first of the lead group to pit on lap sixteen, with Massa, Hamilton, Kubica and Räikkönen following him in on successive laps.[2] On track, meanwhile, Kovalainen suffered a worrying accident at turn three, spearing into the barriers as his front left tyre failed midway through the flat-out curve.[2]

The Safety Car was thrown immediately after the Finn's accident, meaning the pitlane was closed for two laps midway through the pit window.[2] Nick Heidfeld was the big loser as he had to stop while the pits were closed, while the rest of those yet to stop dived in on lap 26.[2] This resulted in some chaos in the pitlane, culminating in Rubens Barrichello and Giancarlo Fisichella colliding.[2]

The race resumed again on lap 29, with Räikkönen escaping from Massa, while Alonso retired shortly after with an engine failure.[2] Hamilton then held third from Kubica but was unable to challenge the two scarlet Ferraris, which duly disappeared into the distance as the second round of stops came and went.[2]

With that the race was run as Räikkönen eased through the final stint of the race to claim victory 3.2 seconds clear of Massa in second, securing Ferrari's second one-two in as many races.[2] Hamilton completed the podium in third ahead of Kubica, with Mark Webber, Jenson Button, Kazuki Nakajima and Jarno Trulli scoring the remaining points.[2]

Kimi Räikkönen had moved to the top of the Championship after his second placed finish in Bahrain, holding nineteen points to his name after three rounds. He hence had a three point lead over second placed Nick Heidfeld, while former leader Lewis Hamilton had slipped five off the lead in third. The Brit was then level on points with both Robert Kubica and Heikki Kovalainen, while Bahrain race winner Felipe Massa saw in sixth.

In the Constructors Championship BMW Sauber had left Bahrain at the head of the hunt, and moved on to 30 points for the season signalling a potential title bid. Ferrari were, however, just a point behind in second, while McLaren-Mercedes had only slipped two behind, having led the Championship before the race. Williams-Toyota and their engine suppliers Toyota then completed the top five, with both Honda powered teams and Force India-Ferrari yet to score.

The full entry list for the 2008 Spanish Grand Prix is outlined below:

The full qualifying results for the 2008 Spanish Grand Prix are outlined below:

The full results for the 2008 Spanish Grand Prix are outlined below:

Kimi Räikkönen used his second victory of the campaign to establish a nine point lead atop the Championship hunt in Spain, leaving Barcelona with 29 points to his name. Lewis Hamilton had moved back up into second to sit as the Finn's closest challenger, while Robert Kubica was just a point further back in third. Another point separated the Polish racer from Felipe Massa, while Nick Heidfeld completed the early season top five on sixteen.

In the Constructors Championship Ferrari had moved to the head of the pack with a second one-two in a row in Spain, and left the Circuit de Barcelona-Catalunya with 47 points. That translated to a twelve point lead over former leaders BMW Sauber, who left Spain just a point ahead of McLaren-Mercedes in third. Williams-Toyota were next ahead of Toyota, while Honda had their first points of the campaign, leaving Force India-Ferrari and the outgoing Super Aguri-Honda squads as the only pointless teams.