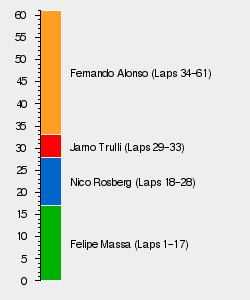 The 2008 Singapore Grand Prix, formally known as the I SingTel Singapore Grand Prix, was the fifteenth round of the 2008 FIA Formula One World Championship, staged at the Marina Bay Street Circuit in Singapore on 28 September 2008.[1][2] The race, which was the 800th Grand Prix to be staged as well as the first to be held at night, would be won by Fernando Alonso, although it would be overshadowed by the Crashgate scandal.[2][3]

Indeed, Alonso had qualified a lowly fifteenth for the Singapore Grand Prix, as title pretender Felipe Massa claimed pole position ahead of Lewis Hamilton.[2] Kimi Räikkönen would start from third ahead of Robert Kubica, while race winner in Italy Sebastian Vettel claimed an impressive seventh.[2]

The start of the race saw Massa ease ahead of Hamilton and teammate Räikkönen to secure an early lead, as behind Kubica and Heikki Kovalainen clashed.[2] That dumped Kovalainen back to sixth with minor front wing damage, as behind Nick Heidfeld and Alonso were forced to cut the first corner due to the incident ahead of them.[2]

The early stages saw the race develop into a procession, with Massa escaping from Hamilton and Räikkönen, while Jarno Trulli formed a road-block in seventh.[2] Indeed, the "Trulli Train" would be the main source of entertainment in the early stages, with Nico Rosberg eventually forcing his way through, with Kazuki Nakajima and Alonso ultimately managing to follow him through.[2]

A few laps later and Alonso was in the pits for his first stop, taking a heavy fuel load and the harder Bridgestone tyres.[2] However, as the Spaniard exited the pits his teammate Nelson Piquet, Jr. would suffer what appeared to be a rather innocuous crash at turn seventeen, triggering a Safety Car.[2]

The 2008 F1 rulebook prevented drivers from instantly pitting when a SC was called, meaning that Alonso was able to tag onto the back of the field, and duly emerged in the lead pack when everyone else was able to stop.[2] In the confusion Ferrari released Massa right into the path of Adrian Sutil and with his fuel hose still attached, forcing the Brazilian to stop at the end of the pits and wait for their assistance.[2]

The resulting shuffle had left Rosberg at the head of the field ahead of Trulli, while Alonso was up to fifth behind Kubica when the race resumed.[2] Rosberg, on a light fuel load, duly broke clear as Trulli again held up those behind, before Rosberg and Kubica were removed from contention after their pitstops were found to have been conducted while the pitlane was closed.[2]

Trulli moved into the lead once Rosberg served his penalty, and once he pitted for his only stop it was Alonso who hit the head of the field.[2] The Spaniard duly eased clear before making his second stop of the night on lap 42, rejoining without losing the lead to a then second placed David Coulthard.[2]

A late Safety Car was called upon when Sutil clouted the wall at turn eighteen, having seen Massa do it a few moments earlier albeit with less dramatic consequences.[2] Regardless, Alonso controlled the restart beautifully to claim victory, with Rosberg and Hamilton completing the podium.[2]

Almost a year after the race investigations into the 2008 Singapore Grand Prix were announced by the FIA, after comments from Piquet's management team indicated that he had been instructed to crash by senior Renault team members.[3] The FIA World Motorsport Council duly delivered their ruling on 21 September 2009 after Renault complied, resulting in a five year ban from competition for Pat Symonds, and a life-time ban for Flavio Briatore.[3] Piquet was granted immunity for his co-operation, while Alonso and Renault were allowed to keep the victory and World Championship points.[3]

The battle atop the Championship had intensified once again as a result of the Italian Grand Prix, with just a point separating the top two in the Championship with four rounds to go. Lewis Hamilton had just held onto the lead after his recovery drive to seventh in the race, although Felipe Massa would leave Monza just a point off the Brit in second. Behind, Robert Kubica had moved fourteen points off the lead as the dark horse for the title ahead of Kimi Räikkönen, while Nick Heidfeld had retained fifth.

In the Constructors Championship Ferrari left their home race with their lead having been cut in two, holding a five point advantage after they moved their tally to 134 points. Their closest challengers were McLaren-Mercedes, who moved onto 129 points after Heikki Kovalainen scored a podium finish, while BMW Sauber had also gained ground in third. Next up were Toyota, remaining ahead of Renault on countback, while Toro Rosso-Ferrari were up to sixth after their maiden triumph on home soil.

The full entry list for the 2008 Singapore Grand Prix is outlined below:

The full qualifying results for the 2008 Singapore Grand Prix are outlined below:

The full results for the 2008 Singapore Grand Prix are outlined below:

Lewis Hamilton managed to increase his Championship lead as a result of the mid-race chaos in the Singapore Grand Prix, leaving the city-state seven points clear of his closest challenger. Indeed, Felipe Massa had lost ground in the title hunt after his team's pit-lane mistakes, although he was still a safety thirteen point clear of third placed Robert Kubica. Behind, Kimi Räikkönen was running out of time to make a title bid in fourth, while Nick Heidfeld had retained his top five status.

There was a change in the Constructors Championship as McLaren-Mercedes hit the top of the title hunt, leaving Singapore with 135 points. With Ferrari failing to score the British squad had established a one point lead over the Scuderia, with those two still the main protagonists for the title. BMW Sauber were still in contention in third but were fifteen points off the lead, while Renault had moved into fourth ahead of Toyota as a result of Fernando Alonso's controversial triumph.