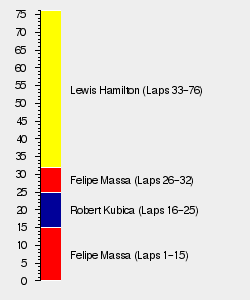 The 2008 Monaco Grand Prix, otherwise known as the LXVI Grand Prix de Monaco, was the sixth round of the 2008 FIA Formula One World Championship, staged at the Circuit de Monaco in Monte Carlo, Monaco, on 25 May 2008.[1][2] The race would see Lewis Hamilton battle to victory in a race of mixed conditions, surviving two punctures to claim his maiden Monaco win.[2]

Qualifying had seen the two Ferraris put an updated suspension system to good use, with Felipe Massa claiming pole position ahead of Championship leading teammate Kimi Räikkönen.[2] Hamilton would start from third alongside his teammate Heikki Kovalainen, while Robert Kubica shared the third row with Nico Rosberg.[2]

Race day dawned with showers drifting across the Principality, meaning that the circuit was partially damp by the time the field gathered on the grid.[2] A late shower then caused the entire field to make a late switch to intermediate Bridgestone tyres, resulting in Räikkönen getting a penalty for his mechanics working on his car beyond the two minute warning.[2] Kovalainen then stalled on the formation lap and was forced to start from the pitlane.[2]

The start itself saw Massa calmly pull into the lead, while a poor start for Räikkönen allowed Hamilton to dive past the #1 Ferrari to secure second.[2] Behind, Kubica secured fourth while Fernando Alonso slithered past Rosberg for fifth, with the rest of the field making it through Sainte Devote without issue.[2]

Indeed, it was only when the field arrived at Lowes for the first time that there was any major contact, with Rosberg removing his front wing on the back of Kubica having lunged past Alonso.[2] The Williams-Toyota was then seen limping back to the pits, as Massa established a small lead over Hamilton as the rain intensified.[2]

Hamilton would opt against attacking Massa for the lead as the conditions worsened, although that ploy appeared to have back-fired when he clipped the barriers at Tabac on lap six and punctured his right-rear.[2] He duly limped back to the pits for a fresh set of intermediates and a heavy fuel load, rejoining in fifth just in time to see Alonso have an identical accident at Massenet.[2]

Two laps later and the race was brought under Safety Car control, as David Coulthard and Sébastien Bourdais clashed at Massenet.[2] This eliminated Massa's twelve second lead over Kubica, although the Brazilian racer was quick to begin rebuilding it when the race resumed three laps later.[2] Räikkönen had already stopped to serve his penalty, dropping to fourth ahead of Hamilton.[2]

Kubica inherited the lead soon after, Massa making his first mistake of the weekend and slid down the escape road at Sainte Devote.[2] Massa then retook the lead when Kubica made his stop on lap 26, and remained ahead of the Polish racer on lap 33 when he made his own stop, leaving Hamilton in the lead.[2]

Hamilton's long second stint proved crucial to the outcome of the race, for by the time he made his stop on lap 54 the conditions had improved enough to use slick tyres.[2] The Brit emerged with a secure lead over Massa, Kubica having also stopped for slicks, with the Brazilian's stop two laps later for slicks dumping him back behind the BMW Sauber.[2]

With that the race order seemed to have been settled, until a heavy accident for Rosberg and Piscine on lap 62 brought the Safety Car out once again.[2] Six laps later the race would resume with Hamilton sprinting clear of Kubica, while Räikkönen took out fourth placed Adrian Sutil after making a mess of his braking for Nouvelle Chicane.[2]

That, ultimately, proved to be the last major incident of the race, with Hamilton gratefully taking the chequered flag on lap 76, the race having reached the two hour time limit just as the McLaren picked up a second puncture.[2] Kubica and Massa completed the podium ahead of Mark Webber, while Sebastian Vettel secured his first points of the season in the new Toro Rosso-Ferrari.[2] Rubens Barrichello, Kazuki Nakajima and Kovalainen completed the scorers list, with Räikkönen recovering to ninth with fastest lap.[2]

Kimi Räikkönen continued to lead the Championship hunt leaving the Turkish Grand Prix, although his advantage had been reduced by those chasing his 35 point tally. Indeed, race winner Felipe Massa had closed to within seven points of his teammate, and moved ahead of Lewis Hamilton, who matched the Brazilian's 28 point haul, but was behind courtesy of one win to Massa's two. Behind, Robert Kubica had slipped four points behind those two in fourth, while Nick Heidfeld had maintained his top five status.

In the Constructors Championship Ferrari had managed to extend their lead at the head of the hunt, having moved onto 63 points courtesy of another double-podium in Turkey. BMW Sauber had likewise secured a good points haul in Istanbul even if they had lost ground to Ferrari, and hence had remained two points ahead of McLaren-Mercedes. Behind, Williams-Toyota and Red Bull-Renault were both embarrassing their engine suppliers as they completed the top five, while the withdrawal of Super Aguri-Honda had left Force India-Ferrari as the only pointless team.

The full entry list for the 2008 Monaco Grand Prix is outlined below:

The full qualifying results for the 2008 Monaco Grand Prix are outlined below:

The full results for the 2008 Monaco Grand Prix are outlined below:

Victory, combined with a non-score for Kimi Räikkönen, meant that Lewis Hamilton left Monte Carlo with the Championship lead, holding 38 points and a three point advantage. Räikkönen slipped to second after finishing ninth in Monaco, while Felipe Massa had moved to within a point of his teammate in third. Robert Kubica was just two further back in fourth, before a twelve point gap split the Pole from his teammate Nick Heidfeld.

In the Constructors Championship Ferrari continued to lead the charge, leaving Monaco with 69 points to their credit. McLaren-Mercedes had moved into second courtesy of Hamilton's second win, moving a point ahead of BMW Sauber as they tried to kick-start their season once again. Williams-Toyota and Red Bull-Renault were next, level on fifteen points, while Force India-Ferrari had once again failed to score.