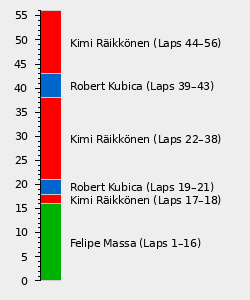 The 2008 Malaysian Grand Prix, formally known as the 2008 Formula 1 Petronas Malaysian Grand Prix, was the second round of the 2008 FIA Formula One World Championship, staged at the Sepang International Circuit in Sepang, Malaysia, on 23 March 2008.[1][2] The race would see Kimi Räikkönen secure his first victory of the season, overcoming teammate Felipe Massa as the Brazilian span out.[2]

Qualifying had seen the Ferraris steal the show, with Massa claiming pole position ahead of teammate Räikkönen.[2] They were trailed by the two McLaren-Mercedes of Lewis Hamilton and Heikki Kovalainen, although they were both handed five-place grid penalties for blocking other drivers during Q3.[2]

Massa would defend his lead aggressively at the start, sweeping across to the inside of the circuit to prevent Räikkönen from lunging inside into the first corner.[2] The rest of the field hence charged in behind the two scarlet cars, with Hamilton managing to leap up to fifth from eighth, taking advantage of an outside line through turn one.[2]

Timo Glock and Nico Rosberg also made their mark on the race early on, with Rosberg taking his compatriot out with an ambitious lunge into turn four.[2] That, other than a race ending spin for Sébastien Bourdais, was the only major drama of the opening lap, with Massa opening out a small lead over Räikkönen.[2]

The early laps saw Massa and Räikkönen escape up the road from Robert Kubica, with the Polish racer also able to build a gap over fourth placed Mark Webber.[2] The Australian racer duly came under pressure from Hamilton as the first round of stops loomed, as behind Fernando Alonso and Nick Heidfeld made ground after their qualifying issues caused by the two McLarens.[2]

Webber was the first member of the leading groups to stop, sweeping his Red Bull-Renault into the pits at the end of lap sixteen.[2] Massa and Räikkönen followed him in on the next two laps, while Hamilton stayed out until lap nineteen, setting a succession of quick laps, only for an issue with the front right wheel costing him twelve seconds in the pits.[2]

Kubica was the last of the leaders to stop on lap 21, handing the lead over to Räikkönen who had jumped Massa courtesy of a quick in-lap and a shorter fuel stop than his teammate.[2] The Finn duly built a four second lead over the Brazilian to establish himself in the lead, with Massa pushing hard to reduce the gap.[2]

That, ultimately, proved to be Massa's downfall, for a spin on lap 31 saw the #2 Ferrari beach itself in the gravel and hence drop out of the race.[2] That left Kubica in second behind Räikkönen, Heikki Kovalainen in third on a one-stop, and Jarno Trulli up in fourth ahead of the Webber/Hamilton fight.[2]

The second round of stops saw little change to the order out front, with Räikkönen maintaining a healthy lead over Kubica, while Kovalainen remained a distant third.[2] Hamilton, meanwhile, would finally overcome Webber to secure fifth and go charging off after Trulli, although time was fast running out for the Brit to catch the #11 Toyota.[2]

Out front, meanwhile, Räikkönen would cruise through the final stint to secure victory, leading Kubica across the line by almost twenty seconds.[2] Kovalainen was next ahead of Trulli, who fended off Hamilton's last lap challenge, while Heidfeld jumped Webber in the final stint and grabbed fastest lap.[2] The Australian racer was hence relegated to seventh ahead of Alonso, with seventeen drivers making it to the chequered flag, almost three times the number that had in Australia a week earlier.[2]

Heidfeld's maiden fastest lap meant he set a new record for most starts before setting fastest lap at 134, beating Thierry Boutsen's record of 114.[1]

Victory at the opening race of the 2008 season left Lewis Hamilton at the head of the field, the Brit establishing a two point advantage. Nick Heidfeld and Nico Rosberg were next ahead of Fernando Alonso and Heikki Kovalainen, while Kimi Räikkönen had opened his title defence with a single point. That left the Finn in eighth behind maiden scorers Kazuki Nakajima and Sébastien Bourdais.

In the Constructors Championship it had been a very strong opening day for McLaren-Mercedes, as they streaked to the top of the table with fourteen points. That meant that they held a five point lead over Williams-Toyota in second, the only other team with two point scorers in Australia, while BMW Sauber completed the early top three. Renault were next on five ahead of Toro Rosso-Ferrari, while title defenders Ferrari had opened their account with a solitary point.

The full entry list for the 2008 Malaysian Grand Prix is outlined below:

The full qualifying results for the 2008 Malaysian Grand Prix are outlined below:

The full results for the 2008 Malaysian Grand Prix are outlined below:

Lewis Hamilton had maintained his early Championship lead at the Malaysian Grand Prix, fifth place moving him onto fourteen points after the opening two rounds. Kimi Räikkönen, meanwhile, had been the big winner both on and off track, leaping up into second with eleven, albeit level on points with Nick Heidfeld. Heikki Kovalainen was just a point further behind in fourth, with Robert Kubica completing the top five.

In the Constructors Championship McLaren-Mercedes continued to lead the way, leaving Malaysia on 24 points and with the same five point lead that they had started the weekend with. BMW Sauber had retained second, while Ferrari had leapt into third, but had less than half the points of McLaren after the opening two rounds. Williams-Toyota and Renault then completed the top five, with eight constructors on the board.