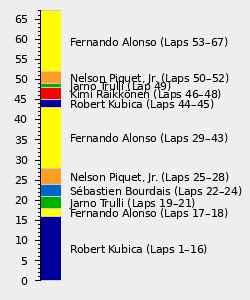 The 2008 Japanese Grand Prix, formally known as the 2008 Formula 1 Fuji Television Japanese Grand Prix (XXXIV フジテレビ日本グランプリ in Japanese), was the sixteenth race of the 2008 FIA Formula One World Championship, staged at the Fuji Speedway in Sunto District, Japan, on 12 October 2008.[1][2] The race would see Fernando Alonso sweep to victory for the second race in succession, after title protagonists Lewis Hamilton and Felipe Massa clashed.[2]

Championship leader Hamilton was the man to beat in qualifying, the Brit sweeping to pole position ahead of Kimi Räikkönen of Ferrari.[2] Heikki Kovalainen and Alonso would share the second row, leaving Massa down in fifth ahead of Robert Kubica.[2]

The start of the race saw Räikkönen get the jump on Hamilton, easing ahead of the #22 McLaren-Mercedes on the run to the first corner.[2] Hamilton tucked in behind the Finn before sending a lunge inside the #1 Ferrari, which forced both wide and into the path of Kovalainen.[2]

Kubica hence emerged from the first corner in the lead ahead of Alonso, while further down the field a series of collisions saw Giancarlo Fisichella smack into the back of Rubens Barrichello, while David Coulthard hit both Sébastien Bourdais and Nelson Piquet, Jr.[2] Hamilton, meanwhile, would rejoin in sixth behind Massa, with Räikkönen on his tail, with Hamilton placed under investigation for his antics at turn one.[2]

A lap later however and Massa was the man under scrutiny for a mistake at the turn ten chicane saw the Brazilian let Hamilton through, before smacking into the McLaren mid-corner.[2] Hamilton was left to limp back to the pits for a new set of tyres, while Massa dropped to eighth before being slapped with a drive-through penalty.[2] Hamilton was given the same penalty for his turn one incident.[2]

Hamilton would serve his penalty instantly having climbed up to fifteenth, while Massa first took a pitstop before serving his punishment, dumping him down to fourteenth.[2] Out front, meanwhile, Kubica would lead through until he made his stop on lap seventeen, joined by Räikkönen in the pitlane, while Alonso stayed out a lap longer and took on less fuel to grab the de facto lead.[2]

Once those on longer first stints pitted the order read as Alonso leading from Kubica and Räikkönen, with the rest of the field spreading out as Massa and Hamilton inched back towards the top ten.[2] Yet, there would be no major changes tot he order in the middle stint, with Alonso pitting and rejoining ahead of Kubica, who would himself retain second from Räikkönen.[2]

Massa's challenge would be damaged during the second pit-phase, for the Brazilian collided with Bourdais as the Frenchman exited the pits sending the Brazilian into a spin, recovering to eighth, while Bourdais was slapped with a post-race time penalty.[2] Hamilton, meanwhile, would fail to make an impact with the Brit carrying a fair amount of damage, and would never threaten the top ten.[2]

Out front, meanwhile, Alonso held a commanding lead through to the chequered flag, securing his second straight victory.[2] Behind, Kubica fended off a challenge from Räikkönen to secure second, while the Finn just kept Piquet at bay to retain third and complete the podium.[2] They were followed by Jarno Trulli, Bourdais, Sebastian Vettel and Massa, although once Bourdais served his penalty Mark Webber would be promoted into eighth.[2]

Lewis Hamilton managed to increase his Championship lead as a result of the mid-race chaos in the Singapore Grand Prix, leaving the city-state seven points clear of his closest challenger. Indeed, Felipe Massa had lost ground in the title hunt after his team's pit-lane mistakes, although he was still a safety thirteen point clear of third placed Robert Kubica. Behind, Kimi Räikkönen was running out of time to make a title bid in fourth, while Nick Heidfeld had retained his top five status.

There was a change in the Constructors Championship as McLaren-Mercedes hit the top of the title hunt, leaving Singapore with 135 points. With Ferrari failing to score the British squad had established a one point lead over the Scuderia, with those two still the main protagonists for the title. BMW Sauber were still in contention in third but were fifteen points off the lead, while Renault had moved into fourth ahead of Toyota as a result of Fernando Alonso's controversial triumph.

The full entry list for the 2008 Japanese Grand Prix is outlined below:

The full qualifying results for the 2008 Japanese Grand Prix are outlined below:

The full results for the 2008 Japanese Grand Prix are outlined below:

Lewis Hamilton saw his Championship lead cut by two points as a result of the Japanese Grand Prix, and hence left the Fuji Speedway with a five point advantage. Felipe Massa had hence closed in on the Brit at the head of the field, and was one of only two drivers who could deny Hamilton the crown. Indeed, Robert Kubica still entertained hopes of becoming the 2008 World Champion, although he would have to outscore Hamilton by three points in China just to stay in the hunt.

In the Constructors Championship Ferrari had moved back to the top of the pack, largely due to the fact that McLaren-Mercedes had failed to score. Indeed, the Brit squad had gone from holding a one point lead to trailing the Scuderia by seven points, with those two still the main protagonists with two rounds to go. BMW Sauber were still in the hunt in third, fourteen off the lead, but had long since acknowledged that their focus was on the 2009 season.