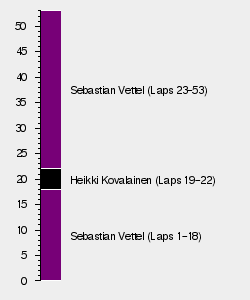 The 2008 Italian Grand Prix, officially the LXXIX Gran Premio Santander d'Italia, was the fourteenth race of the 2008 FIA Formula One World Championship, which took place at the Autodromo Nazionale Monza in Monza, Italy, on 14 September 2008.[1][2] The race would see Sebastian Vettel secure his maiden F1 pole position and race victory, becoming the youngest ever race winner aged 21 years, 73 days.[2]

Indeed, in a weekend dictated by poor weather conditions, Vettel would emerge as a future star of the Championship, having secured pole in his Toro Rosso-Ferrari during qualifying.[2] Heikki Kovalainen claimed second ahead of Mark Webber in the Red Bull-Renault, while the sister Toro Rosso of Sébastien Bourdais would start from fourth.[2] Of the title protagonists Felipe Massa was the best placed in sixth, as Lewis Hamilton slumped to fifteenth.[2]

The weather remained poor into raceday, resulting in the race starting behind the Safety Car with the entire field made to start on extreme wet Bridgestone tyres.[2] Yet, after just one sighting lap the field would be released, with Vettel leading a cautious charge into the Rettifilo, as teammate Bourdais stalled from fourth at the original start.[2]

Vettel escaped up the road from Kovalainen during the early laps, with the field largely running in grid order as spray became a major concern.[2] Indeed, the only real battle in the field came between the out-of-place Kimi Räikkönen and Hamilton as they came through the midfield, with both passing David Coulthard at the same time.[2]

Hamilton went on to attack Räikkönen, but after overshooting the Rettifilo and handing the position back to the Finn, opted to remain behind him.[2] They continued to climb into the top ten before Hamilton finally made a move stick on Räikkönen, before breaking clear of the Finn with a succession of moves on Nick Heidfeld, Timo Glock, Robert Kubica and Fernando Alonso.[2]

Vettel was the first driver to pit on lap eighteen, although he would have a fair advantage over Kovalainen in second and hence remained ahead when the rest of the leaders stopped four laps later.[2] Shortly after the stops, with everyone staying on wet tyres, the rain would return, although after a five minute spell, in which Coulthard would gamble on inters and duly slid straight across the Rettifilo, it stopped and the circuit began to dry.[2]

A few laps later and there was an en-masse switch to inters, sparked by those on a one-stop, notably including Alonso, successfully making the semi-slick tyres work.[2] Vettel retained the lead with the field fairly spread out, although Hamilton emerged as the fastest driver in the running, lapping a full second quicker than the German youth as he reeled in Webber.[2]

Otherwise the final stint proved fairly tame, with Vettel skating through the closing stages to secure his and Toro Rosso's maiden victory, which was also notable as the first for a Ferrari engine outside of a Ferrari chassis.[2] It was also the first for an Italian based team other than Ferrari since Maserati won the 1957 German Grand Prix.[2]

Behind Vettel came Kovalainen and Robert Kubica, while Hamilton finished in seventh behind title rival Massa, leaving them just a point apart with four races to go.[2]

The controversial conclusion to the Belgian Grand Prix saw Felipe Massa move right onto the back of the Championship leader Lewis Hamilton, leaving Spa just two off the lead. Indeed, Hamilton had moved onto 76 points to the Brazilian's 74, with the pair effectively the two main protagonists for the crown. Behind, Robert Kubica had remained mathematically in the hunt as he climbed to third ahead of Kimi Räikkönen, while Nick Heidfeld had moved back ahead of Heikki Kovalainen.

In the Constructors Championship Ferrari had managed to extend their lead as a result of the post-Spa fallout, leaving the Belgian circuit with a twelve point advantage. Indeed, McLaren-Mercedes had lost ground as a result of Hamilton's demotion, leaving Spa on 119 points, and just twelve ahead of BMW Sauber in third. Indeed, those three were the only teams capable of taking the Constructors crown, with Toyota 90 points behind Ferrari with five races to go.

The full entry list for the 2008 Italian Grand Prix is outlined below:

The full qualifying results for the 2008 Italian Grand Prix are outlined below:

The full results for the 2008 Italian Grand Prix are outlined below:

The battle atop the Championship had intensified once again as a result of the Italian Grand Prix, with just a point separating the top two in the Championship with four rounds to go. Lewis Hamilton had just held onto the lead after his recovery drive to seventh in the race, although Felipe Massa would leave Monza just a point off the Brit in second. Behind, Robert Kubica had moved fourteen points off the lead as the dark horse for the title ahead of Kimi Räikkönen, while Nick Heidfeld had retained fifth.

In the Constructors Championship Ferrari left their home race with their lead having been cut in two, holding a five point advantage after they moved their tally to 134 points. Their closest challengers were McLaren-Mercedes, who moved onto 129 points after Heikki Kovalainen scored a podium finish, while BMW Sauber had also gained ground in third. Next up were Toyota, remaining ahead of Renault on countback, while Toro Rosso-Ferrari were up to sixth after their maiden triumph on home soil.