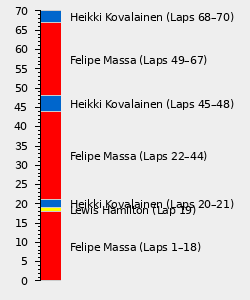 The 2008 Hungarian Grand Prix, otherwise formally known as the Formula 1 ING Magyar Nagydíj 2008, was the eleventh round of the 2008 FIA Formula One World Championship staged at the Hungaroring near Budapest, Hungary, on 3 August 2008.[1][2] The race, which was heralded by the creation of the Formula One Teams Association, would see Heikki Kovalainen sweep to his first and only Grand Prix victory, becoming F1's 100th different race winner.[2]

The creation of FOTA was the result of increasing tensions between the Teams and F1's two main authorities, the Fédération Internationale de l'Automobile, and Formula One Management.[3] To add more weight to their arguments the teams, led by rivals McLaren and Ferrari, particularly when the Championship were discussing changes to technical regulations.[3]

Qualifying for the race itself would see Championship leader Lewis Hamilton secure pole position, with McLaren-Mercedes teammate Kovalainen completing the front row.[2] Title pretender Felipe Massa would line up in third ahead of Robert Kubica, while Kimi Räikkönen could only muster sixth behind Timo Glock.[2]

The star of the start of the race, however, would be Massa, who shot between the two McLarens off the grid, before lunging around the outside of Hamilton to secure the lead into turn one.[2] Kovalainen hence slipped to third ahead of Glock, who had leapt past Kubica, while Fernando Alonso managed to squeeze ahead of Räikkönen.[2]

The early stages of the race saw Massa and Hamilton ease clear, leaving Kovalainen in a lonely third as Glock had to fend off the attentions of Kubica.[2] Elsewhere, Nick Heidfeld was causing a queue in the midfield with a high fuel load, resulting in the two Hondas fighting amongst themselves in the #3 BMW Sauber's wake.[2]

As the race wore on and track temperatures increased Massa would slowly escape from Hamilton, aided by the fact that the Ferrari was better at preserving its tyres.[2] Yet, the Brazilian would ultimately pit earlier than the Brit having establishing a three second lead, with Kubica and Mark Webber joining him in the pits.[2]

Hamilton stopped a lap later and rejoined behind the Brazilian, while Kovalainen remained out for an additional two and gained ground on both.[2] Nelson Piquet, Jr. then briefly led until he stopped on lap 25, the last of those on a two-stop, and duly shot ahead of Kubica in the overall order.[2]

Massa would continue to ease clear from Hamilton during the second stint, prompting Hamilton to push harder than his tyres could cope with in the high heat.[2] As a result the Brit's front-left Bridgestone failed on lap 41 to send the Brit limping back to the pitlane, and hence left Massa with a comfortable 23 second margin over Kovalainen in second.[2]

Massa eased his pace before making his second and final stop, with Kovalainen leading for four laps before making his stop.[2] However, there was to be one late twist just three laps from the chequered flag, as Massa's engine blew apart to leave the Brazilian on the sidelines.[2]

Kovalainen duly swept past to claim victory, while Glock had a strong second stint to secure second, his maiden podium finish.[2] Räikkönen claimed fastest lap en-route to third, while Hamilton rallied back to fifth behind Alonso, who had fended off the Brit's attentions in the closing stages.[2]

Lewis Hamilton moved clear atop the Championship with victory in Germany, having eked out a four point lead at the head of the hunt. Felipe Massa had retained his second place status on 54 points, while Kimi Räikkönen had slipped a further three behind, having been tied with Massa and Hamilton at the start of the weekend. Robert Kubica, meanwhile, had slipped ten behind, while Nick Heidfeld was seven off of his Polish teammate.

In the Constructors Championship it was still Ferrari who led the charge, leaving Germany with 105 points and the first team to break into triple figures for the campaign. Behind, BMW Sauber had left their home race still in second place, although the Anglo-German alliance of McLaren-Mercedes had closed to within three points of the Swiss-German team. Toyota were head of the next batch of teams, 61 points behind McLaren, with Red Bull-Renault and Renault just one and two points behind the Japanese manufacturer.

The full entry list for the 2008 Hungarian Grand Prix is outlined below:

The full qualifying results for the 2008 Hungarian Grand Prix are outlined below:

The full results for the 2008 Hungarian Grand Prix are outlined below:

Lewis Hamilton saw his Championship lead grow by a single point as a result of the Hungarian Grand Prix, leaving the Hungaroring with a five point advantage. Kimi Räikkönen had moved into second to be the Brit's closest challenger, with Felipe Massa's engine failure potentially crucial to the outcome of the Championship as he slipped eight behind. Elsewhere, Robert Kubica and Nick Heidfeld retained their top five status, although they had been reeled in by race winner Heikki Kovalainen.

In the Constructors Championship it was Ferrari who continued to lead the way, although their advantage at the head of the field had been reduced. Indeed, McLaren-Mercedes had moved to within striking distance after Kovalainen's fortunate Hungaroring triumph, leaving Hungary just eleven off the lead. Behind, BMW Sauber had made way for the Anglo-German alliance and slipped to third, while Renault had moved ahead of their customers Red Bull-Renault to secure fifth.